Manny’s: The Rise of Populism and the Future of the European Union 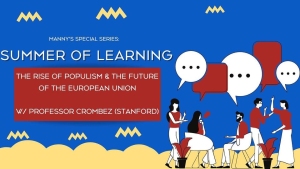 There has been a recent rise of populism across the EU. What can the United States learn and how does this effect the future of Europe?
Populism has been rising across Europe from Poland to France becoming more and more common. Elections and politics in general have begun to lose center right/left parties as populism continues to increase.
What does this mean for the future of the European Union that has had strong center parties since World War II? How is the United States effected by this shift? Join Professor Crombez as he explains how Europe has changed politically, what caused these changes, and what comes next.
Are you a current student? Email the word “caffeine” and the title of this event to [email protected] for a complementary ticket
Manny’s never turns away anyone for lack of funds. To receive a complementary ticket just email the word “grapefruit” and the title of this event to [email protected]
About Christophe Crombez, Ph.D.:
Christophe Crombez is a political economist who specializes in European Union (EU) politics and business-government relations in Europe. His research focuses on EU institutions and their impact on policies, EU institutional reform, lobbying, party politics, and parliamentary government.
Crombez is Senior Research Scholar at The Europe Center at the Freeman Spogli Institute for International Studies at Stanford University (since 1999). He teaches Introduction to European Studies and The Future of the EU in Stanford’s International Relations Program, and is responsible for the Minor in European Studies and the Undergraduate Internship Program in Europe.
Furthermore, Crombez is Professor of Political Economy at the Faculty of Economics and Business at KU Leuven in Belgium (since 1994). His teaching responsibilities in Leuven include Political Business Strategy and Applied Game Theory. He is Vice-Chair for Research at the Department for Managerial Economics, Strategy and Innovation.
Crombez has also held visiting positions at the following universities and research institutes: the Istituto Italiano di Scienze Umane, in Florence, Italy, in Spring 2008; the Department of Political Science at the University of Florence, Italy, in Spring 2004; the Department of Political Science at the University of Michigan, in Winter 2003; the Kellogg Graduate School of Management at Northwestern University, Illinois, in Spring 1998; the Department of Political Science at the University of Illinois at Urbana-Champaign in Summer 1998; the European University Institute in Florence, Italy, in Spring 1997; the University of Antwerp, Belgium, in Spring 1996; and Leti University in St. Petersburg, Russia, in Fall 1995.
Crombez obtained a BA in Applied Economics, Finance, from KU Leuven in 1989, and a Ph.D. in Business, Political Economics, from Stanford University in 1994.

‘A different level’: Here’s how Nebraska packed up its football team and sent it overseas | Football