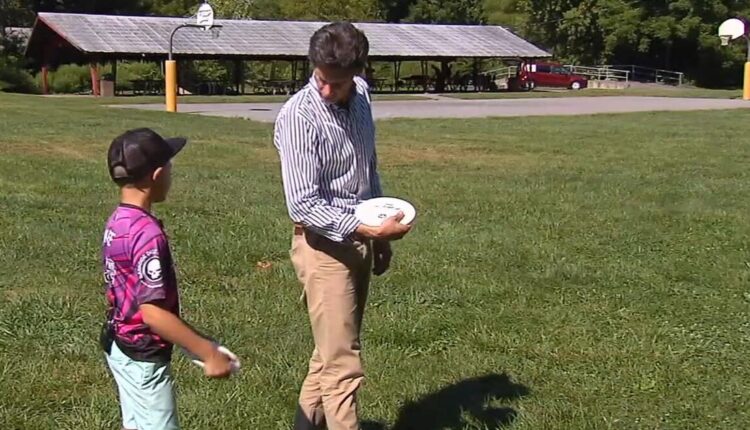 LEHIGH VALLEY, Pa. — “All the way back, all the way forward,” said Cole Kresge to a mix of kids and adults, while holding a disc for disc golf.

Leading a clinic, any clinic, like the one at Camp Olympic, at the age 9, means you’re probably pretty good. In the world of disc golf, there’s perhaps no one better, under the age of 10 than 9-year-old Cole Kresge.

“All he does is disc golf, from the moment he wakes up to the moment he goes to bed. We have three baskets in our backyard, and ringing and chinging,” said his dad, Charlie.

All that ringing and ching is paying off.

In July, the soon to be 4th grader competed in the Professional Disc Golf Associations World Championships, held in Peoria, Illinois, where he made a rare Eagle. He finished second, but still maintains the world’s highest rating for those under 10.

“What do you like so much about disc golf?” I asked him.

He started at the age of 3.

At 9, Cole already has sponsors, like Andrew Kline, owner of Out of Bounds Disc Golf.

“It’s amazing what he can do. His love for the game is unmatched,” he said.

Even in the snow, as he plays year-round.

Cole showed me those moves, as I’m a novice player, whose best score is plus 4.

“You want to come from inside your body,” Cole said as he threw the disc effortlessly into the basket.

“Well, that’s why I’m not a world champion,” I said as my disc flew past the same basket.

“Well, I’m not one yet,” Cole responded.

Yet, being the key word.

What others are reading…

Manny’s: The Rise of Populism and the Future of the European Union