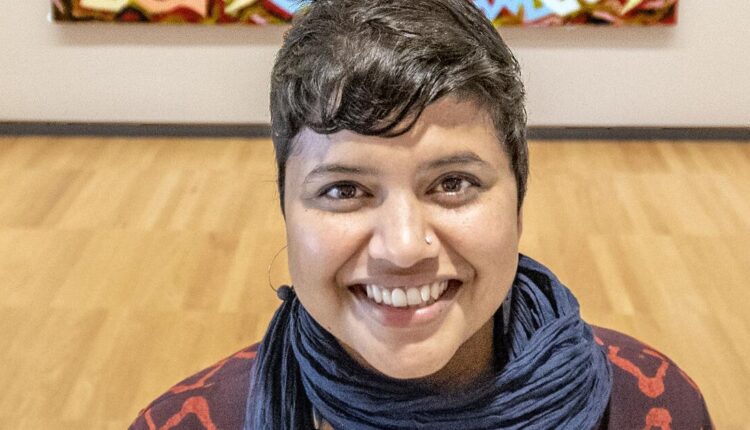 CHAMPAIGN — For the first year-and-a-half after moving to the United States, Ishita Dharap built small, delicate paper sculptures and suspended them on fishing wire.

These snippets of printed materials, like Mariano’s receipts, the South Side Weekly, and Chicago Transit Authority schedules, became her installation in a Chicago art show at the Hyde Park Art Center: “Emptiness for Empty Time.”

“I felt like I was uprooted a little bit; there was no connection to the ground; I was kind of floating through the air but still meticulously building something with care and love,” Dharap said. “But that a great gust of wind could throw me off balance. That’s how I’m reading it now.”

Five years after immigrating to Chicago from India, Dharap is on far firmer ground. She was an education coordinator at the Krannert Art Museum, in the first few weeks of her doctoral program in art education at the University of Illinois.

And she’ll soon be honored with this year’s Student Leadership Award from the Champaign-Urbana Immigration Forum Awards for her groundbreaking work at the museum, which has aimed to uplift the local immigrant population and international audiences.

Four months after Dharap took the job at the museum, she led a virtual tour titled “This is My American Dream,” exploring the concepts of immigration and migration through art. She hosted it during Welcoming Week 2021 last September.

Since Dharap moved to Champaign in March 2022 — after a year of working remote — she’s designed several self-guide booklets for visitors of the museum, featuring original imagery, questions to consider and scavenger hunt exercises: usually 2-by-2-inch cutouts of art for users to find in the galleries. (The security guards find these hunts especially amusing, Dharap said.)

“So much of her work leverages her own creativity as an artist into really unique ways to bring the community together to look into issues that impact our everyday lives,” said Rachel Storm, Krannert Art Museum’s assistant director of community engagement and learning — and Dharap’s nominator.

This week, Dharap is hosting another novel event that builds off her personal experience: “Long-Distance Love,” a live virtual tour of the museum offered in five different time zones, so the loved ones of campus-connected people can tune in as well.

Each offering takes place at 7 pm for a certain time zone across the globe. Dharap hosted the first tour Tuesday morning at 6 am Central — she hopes to renew them in the winter.

“I have been in India and tried to stay up at night to attend a virtual offering in New York or Chicago, when I’m barely awake and trying to watch this artist talk and barely getting anything,” she said.

Dharap grew up in Pune, India, a city close to Mumbai, in and around her grandfather’s art studio. Her granddad was a painter and potter; her father is a landscape architect and sculptor; her mom is a painter.

“I grew up around art — it was just something I thought everyone did,” Dharap recalled.

She studied interdisciplinary art and design in Bangalore, then moved to Chicago in 2017 to join her own long-distance love after they got married.

The transition was “joyful, but tough,” Dharap said. She was finally living in the same space as her long-time partner, but landed in the US at a politically fraught time for immigrants — the same day President Donald Trump was sworn into office.

She sought solace in art and activism, like the Protest Lending Library, that created a collection of reusable protest banners.

She later obtained her master’s in art education from the Art Institute in Chicago, where she became fascinated with the museum medium.

“Museums are a really potent place for some really interesting conversations to happen, that maybe aren’t already happening,” Dharap said. “We can use them as a space to create belonging and welcoming spaces, while we excavate other ideas.”

In her current work, Dharap tries to make the museum “juicy,” in her own words, “interesting and exciting for folks who might not usually make their way there.”

“We have brilliant curators and folks who study the collections so intently, it’s all there, it just needs to be made welcoming and hospitable,” Dharap said. “I’d consider my work a success if after the program one person says, ‘oh, that painting is stuck in my brain, I have to see it again.’”

Her final sessions of the “Long-Distance Love” tour will be hosted at 1 pm Thursday and 5 pm Friday. Those interested in these time zones can sign up at https://kam.illinois.edu/event/long-distance-love-immigration-tour. Sessions are capped at 15 participants.