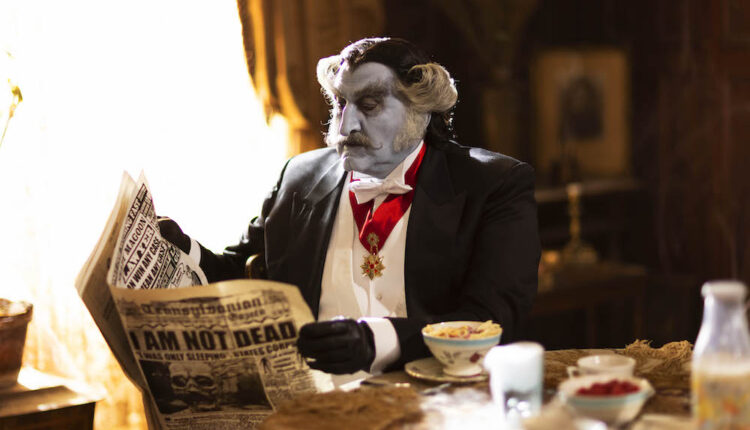 If you watched even a little bit of classic TV in your childhood, there’s a good chance that reruns of the ’60s sitcom, The Munsters, hold a special place in your media memory bank. The series was a warm and fuzzy satire of the traditional American family which plunked the monster-filled Munsters family of Transylvania right into the middle of suburbia. The series made the individual family members — parents Herman and Lily, Grandpa and young Eddie and “normal” niece Marilyn — and the actors who played them almost as famous as the Universal Monsters that inspired them.

While the series only aired for two seasons, The Munsters as a family and brand have remained pop culture staples in the wake of big screen movies, and subsequent next generation reboots and revivals over the years. The latest is Rob Zombie’s passion project, movie reimagining, The Munsters. A project decades in the making, the final product finally arrives Sept. 27 on Blu-ray, DVD, and Digital with a stable of Zombie project thespians stepping into the shoes of the classic roles. One of them is actor Daniel Roebuck, the prolific character actor who has appeared in projects ranging from The Love Boat to Lost. As much of a fan of The Munsters as Zombie, Roebuck tells SYFY WIRE what a dream come true its been to slip into the black suit and gloves of The Count, aka Grandpa Munster.

You knew Zombie was trying to make a The Munsters movie for years but what was the exact moment he told you that it was happening and he wanted you in it?

We were on our way to a wedding in Peoria, Illinois on the 19th of July 2019. We’re driving in a car and my wife was wearing a Lily Munster shirt and Rob Zombie comes on as the phone’s ringing. Rob and I are friends for a long time but I don’t bother Rob. He’s busy. It’s not easy being a rock star. [Laughs.] But that’s when he asked me to do it.

COVID ended up delaying the production start. What there a concern it would die on the vine?

We thought we were going in 2020 and then we didn’t go. We tried again and we didn’t go again. I started thinking it may never happen. But then, my goodness, once we were going, we were going. There’s a point where you just have to trust the universe. I just had to finally take a deep breath and just think, “If it’s gonna be, it’s gonna be and I hope we’re all around see it.” And then it was! What was the hardest thing he wanted to keep it a secret. I couldn’t talk about it to anybody except our closest family.

I’m sure you’ve had to live under the rules of many an NDA?

yes Star Wars Jedi: Fallen Order was like that too! That was terrible! Knowing what a fan and nerd I am, being in this stuff and not being able to tell people, it’s very difficult. [Laughs.] My favorite thing to do would be to call people who knew about this when I was in the makeup, I would FaceTime them. [Laughs.]

Let’s talk about the incredible makeup. Were you part of the initial design conversations?

I wish that I could take any credit for how cool it is, but the only persons who can credit are Rob Zombie and then Wayne Toth, the great makeup maestro. When Rob asked me to be in it, he sent me a picture that I looked at in the car that day on July 19. In it, Grandpa had a very elaborate hairdo and the mustache. Really, the only thing we couldn’t do, our good friends at Universal Studios wouldn’t allow me to smoke a cigar.

Not even a vampire can smoke these days.

Well, he is a 400-year-old vampire. [Laughs.] So, that’s what Rob had The Count looking like from the beginning so it didn’t surprise me.

I’m going to assume being in the makeup really informed your performance as The Count. Did you ask to be part of makeup tests to get a feel for being him?

You’re a smart person to ask this question. No, I never got a makeup test before we left for Budapest. Jeff Phillips (Herman Munster) got one when we thought we were going the first time. And my wig was so elaborate. It took months and months to make. But the first time we put the makeup on, I asked Rob if I could have a room with a mirror. He gave me a room and a mirror and an hour all by myself before they took it all off because you want to see how it moves.

Did it change much?

We did the first makeup test where Rob altered the color a little bit. He wanted it bluer. When you see us in the movie, we’re blue and green and white, but he knew he was hitting us with lavender, green and red lights. The makeup that looks so extreme when we’re in America, when we’re in Transylvania, it doesn’t look extreme. After that, we did one big makeup/wardrobe test where we put it on and got to work in front of the camera trying different lights and whatnot. Zoran Popovic was the cinematographer and did a great job.

As a life-long fan of The Munsters and Universal Monsters, has it hit you that you’re now forever part of this legacy?

How did you end up playing several roles in The Munsters like Transylvania Today host Ezra Mosher and others?

In the original concept, I think I was gonna be a Burgermeister somewhere. But because I’ve been the talk show host for Rob as Morris Green in 3 From Hell and El Superbeasto, he found that node for me. I remember one day we’re in the middle of Budapest, our building that we’re living in is right across from the National Museum, and the place where Paris is [in the movie] was right on the other side of the street of the museum. I’m just sitting there reading in the restaurant part of our hotel and he comes in. He looks around and sees me and goes, “Do you want to be in the movie tonight?” I was like, “Yup.” I just closed my book. [Laughs.] He’s like, “I want to put you in the French village.” And here I was with the makeup people, putting costumes on me and gluing on mustaches and beards. And that’s the kind of movie it was, just joyful. I get up, and I follow the Pied Piper to wherever we’re going, and whatever craziness he has planned for me. Whatever it is, it’s going to be perfect.

What was your “pinch me” moment playing The Count in this movie?

Rising out of the coffin was very important to me. I was like, “Please don’t ever cut this!” That whole Nosferatu thing is fun. And it sounds weird, but being in the lab. The cast all have 70 costume changes and I have three. We made that lab tunic. Rob designed that and these wonderful women made it. I thought that was great. But all of it, from beginning to end, was like a dream that came true, that’s still a dream.

The Munsters is available on Sept. 27 on Blu-ray, DVD, and Digital from Universal Pictures Home Entertainment.

Stream the original The Munsters series on Peacock.