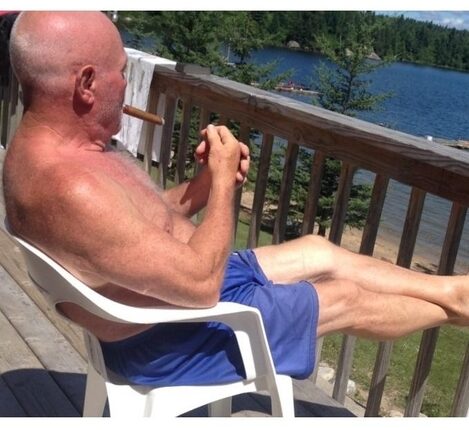 Marty was born in Champaign-Urbana, Illinois to Kenneth and Mildred Thomas April 30th, 1938 and transplanted to his beloved Lawrence, Kansas where he was a proud 50-year resident.

Marty was a Parade All-American football player at Urbana High School and earned a full ride scholarship to the University of Illinois in 1956, becoming a 2nd generation athlete at the U of I along with his younger brother (Steve Thomas). After a severe back injury ended his career, he transferred to Eastern Illinois to finish out his ‘academic’ career.

Later in life, Marty had a long and respected career as a sports official in Lawrence and the Mid-West, working baseball, softball, basketball and football at all levels from Rec League to College. It was here that he met and made some of his strongest, best and life-long friendships. This vocation gave him a great sense of joy, purpose and accomplishment. He was well known to all and liked by most.

Marty went on to become a highly respected and well-known salesman for both Anderson and Pella, specializing in retro-fitting older homes with new window and door technology. He was pretty damned good at it, but didn’t care much for it because, well…… people. And, it kept him from spending time doing what he would much rather have been doing.

Fishing, hunting, mowing his lawn without a shirt, drinking beer, going to the gym, thinking about fishing, planting stuff in his yard, chewing red man tobacco, planning a fishing trip, cleaning gutters, dutifully caring for a cat he hated named ‘Sombitch’, watching sports on TV, organizing fishing stuff, complaining about people, being critical of Kansas Football, being proud of Kansas Basketball, having genuine disdain for all things Missouri, drinking beer and fishing.

Additionally, Marty has 10 grandkids living throughout the country in Kansas, Texas, Colorado, Montana, Idaho, Washington and Oregon. Each of whom he loved, made fun of, sent hilarious birthday cards to, mostly tolerated, provided endless jars of candy to, worried about, cared deeply for and was genuinely proud of.

Per his wishes, there will be no formal funeral; rather, there will be a private gathering to celebrate his impact on all of us and tell stories about some beers & wings. If he liked you, you’re invited – so it will be small event!

Out of respect for his wishes, the family asks that no gifts, flowers or other such nonsense be sent on his behalf.