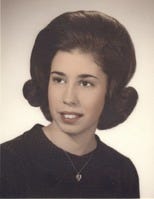 Mary Sue Bridget Scordato, OFS, of Rockford, passed Saturday January 21, 2023 at the age of 75 due to a well fought battle with congestive heart failure. Mary Sue was born October 29, 1947 at St. Joseph’s Hospital and baptized at St. James Church in Belvidere, daughter of Eugene and Dorothy Sullivan. She graduated Boylan High School Class 1965. She married Joseph Scordato on September 17, 1966 at St. Rita Church and professed into the Secular Franciscan Order on June 28, 2015 where most recently she held the office of Formation Director. She had also been a Master Gardener with the U of I Extension. She was an active parishioner at Holy Family Church in the Renew program, the Charismatic Renewal and St. Mary’s Oratory in Rockford.

True to her Franciscan and Irish spirit, her life was characterized by a fervently generous and often playful love for children, animals, nature and fraternity. She saw all aspects of creation as a great gift, particularly children, that continued to surprise and draw her and the world ever close to God in wonder, intimacy and fulfillment. It was a rare moment indeed that one would find her without a child, pet, religious inspiration, doll or mystery novel held in her embrace unless she was gardening, rescuing an injured animal or meeting with family and friends to share company and her latest antique find She will be intensely missed and has made a deep impact upon many hearts through her beautifully simple faith, hope and love.