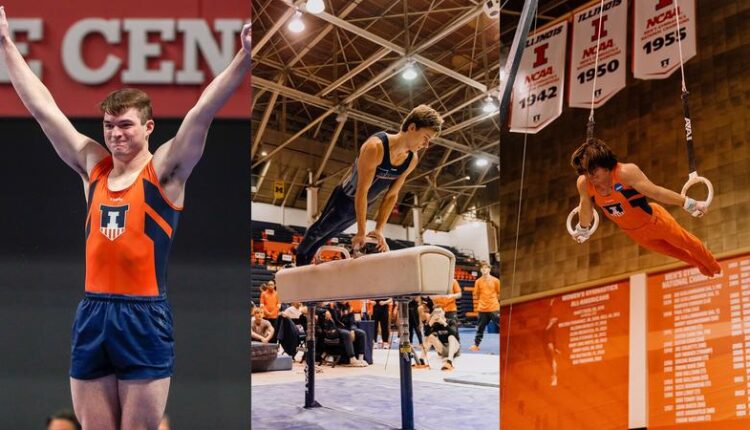 Each gymnast was not only nominated by their coach to compete in the games, but was also chosen by a committee and voted on by fans. The gymnasts pre-recorded their routine and were judged on a ten-point system by the judges in a virtual event.

The All-Star Games had all 15 men’s gymnastics schools compete and were divided into the East and West teams: East team included Air Force, Cal, Greenville, Nebraska, Oklahoma, Simpson and Stanford. Team West included: Army, Illinois, Michigan, Navy, Ohio State, Penn State, Springfield, and William and Mary. Four athletes were selected for each event to represent East or West, along with their program.

McCool competed on floor exercise and earned a 9.25 to grab his first place finish.

Skirkey and Anaya earned themselves a solid 9.00 for their first place titles – Skirkey on pommel horse and Anaya still rings.

Two more Illini competed in the All Star Games, senior Evan Manivong and sophomore transfer Amari Sewell. Both competed in vault, Sewell scoring a 9.75, .25 away from a first place finish, and Manivong a 8.75.

Illinois will start their season on Jan. 14 in the annual Windy City Invitational in Chicago, Ill. at 6 p.m. at the Navy Pier.

THE RESUMPTION OF METAPHYSICAL ENQUIRY

Should I warm up my car every few hours in cold weather?