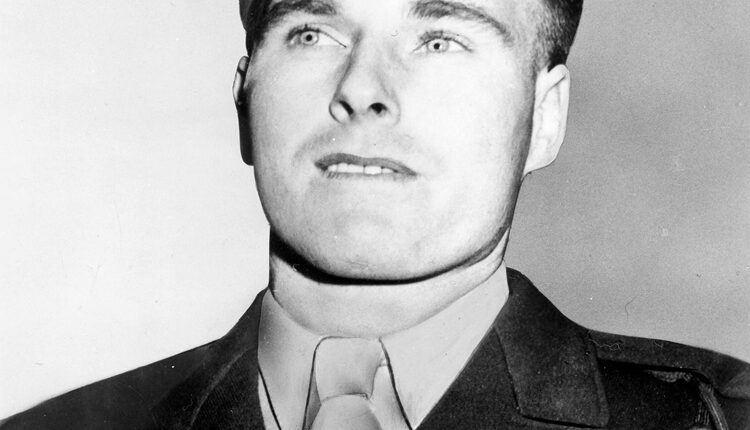 army tech Sgt. Russell Everett Dunham had been shot in the back and was a clear target for the Germans when he was defending a hill in France in 1945.

But neither issue stopped him from single-handedly taking out three enemy machine-gun nests. His bravery and determination to stop the enemy attack earned him the Medal of Honor.

Dunham was born on Feb. 23, 1920, in East Carondelet, Ill., just south of St. Louis. His parents, Ola and Dorothy Dunham, eventually moved the family about 40 minutes north to Fosterburg, Ill.

Dunham was part of a large family; he had eight brothers and five sisters. He attended grade school but dropped out before high school to help tend to the family farm. According to a Washington Post article, Dunham moved to St. Louis with his brother, Ralph, at 16. The two young men sold soup and tamales on the street and in bars to make ends meet during the Great Depression.

During a Library of Congress 2003 Veterans History Project interview, Dunham said that in 1940, he, Ralph and a friend went to Peoria, Illinois, to try to get a job at Caterpillar, but the company wasn’t hiring. Instead, the three men signed up to join the Army. Both Dunhams were assigned to the 3rd Battalion, 30th Infantry Regiment, 3rd Infantry Division when the US joined World War II.

On Nov. 8, 1942 Dunham landed in North Africa, where he fought in combat until his unit was sent to Sicily in July 1943. From there they went to Italy, where Dunham was wounded in the Battle of Anzio. Soon after, the 3rd ID was sent to France, where Dunham, then a technical sergeant, would face one of the toughest fights of his life. 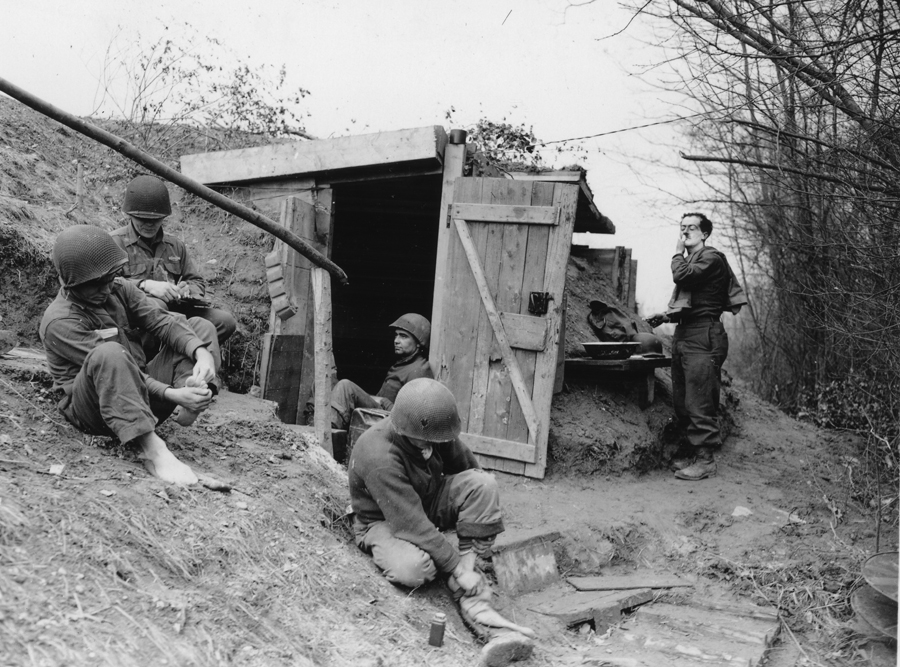 Soldiers with the 30th Infantry Regiment, 3rd Infantry Division, clean up, write letters and relax at a command post in the Neuf-Brisach area of ​​France. At night, the fuel squad occupied a position along the river. Half of each squad came in for a rest during the day. This dugout was constructed by the Germans.

On the afternoon of Jan. 8, 1945, Dunham was with 2nd Platoon, Company I in the Alsace-Lorraine region of France. The platoon was attacking the enemy at the base of a snow-covered hill near Kaysersberg when they got pinned down between enemy artillery and machine-gun fire.

The only choice they had, Dunham said, was to go up the hill. So, he camouflaged himself in a white mattress cover to blend in with the knee-deep snow and started the climb. Carrying 12 carbine magazines and a dozen hand grenades, he crawled about 75 yards under heavy direct fire toward one enemy machine-gun nest. With about 10 yards to go and his platoon about 35 yards behind him, Dunham jumped to his feet and charged the enemy emplacement. He was hit by machine-gun fire that ripped a 10-inch gash across his back and sent him spinning 15 yards back down the hill.

“They said if [the wound] had been deeper, it would have split my spine in two,” Dunham recalled in the Library of Congress interview. 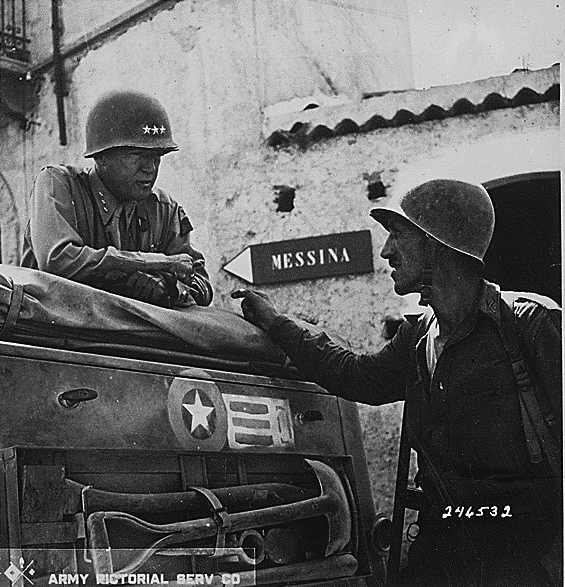 He said he jumped right back up, though, and kept going because he didn’t want to get hit by incoming artillery. Right then, a German grenade landed beside him. Dunham kicked it before it exploded about five yards from him. At the same time, he managed to shoot and kill the German machine gunner and his assistant. Since his carbine was out of ammo, he then jumped into the timber-covered foxhole and hauled a third member of the enemy gun crew out by the collar.

Dunham was in intense pain and bleeding through his white mattress cover, making him a big target, but he kept up the fight. Dodging more bullets, he continued another 50 yards up the hill to attack a second machine-gun nest. He launched two grenades into it, which took out the gun’s crew. He then fired his carbine into nearby foxholes to get rid of any additional enemy riflemen.

Despite his condition, and the heavy grenade and gunfire being launched in his direction, Dunham crawled further up the hill by himself. About 15 yards from the third and final machine-gun nest, he jumped to his feet, staggered to the hole, and killed his crew with more hand grenades. An enemy enemy fired at him at point-blank range, but miraculously missed. Dunham took that soldier out, then drove the rest of the Germans out of their hiding spots with his carbine.

In total, Dunham’s actions killed nine Germans, wounded seven more and captured two, according to his citation. Dunham said he was initially recommended for the Distinguished Service Cross, but it was upgraded to the Medal of Honor.

Before he could receive it, though, he had to make it through France. After the fight near Kaysersberg, Dunham was treated by medics until he was mostly healed, but he was quickly sent back to the front. 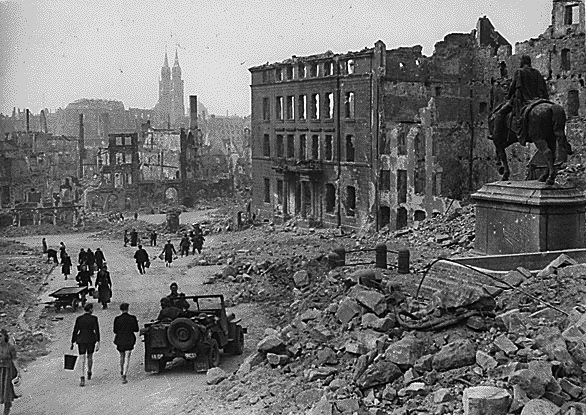 A view of Nuremberg, Germany, following the cessation of organized resistance in World War II. In the distance, the twin-spired Lorenz Church can be seen. On the right and surrounded with rubble is a statue of Emperor William I.

Captured by the Germans

On Jan. 22, 1945, Dunham’s unit was surrounded by enemy tanks at Holtzwihr, France, and most of the men were forced to surrender. In an attempt to escape, Dunham said he hid in a sauerkraut barrel by a barn all night, but he was caught the next day.

Dunham got lucky, though. The guards who searched him fought over the cigarettes and candy he had in his pockets, so they didn’t notice the pistol he was carrying. The guards put him in a vehicle and drove him toward German lines, but when one man stopped at a chateau for a drink, Dunham shot the other guard, then ran.

A few days later, Dunham came across some US engineers working on a bridge over the Ill River. He said they thought he was a German at first, but eventually a medic he knew came along and recognized him. The medic took care of him and saved his frostbitten feet from amputation.

Dunham and his unit eventually pushed into Germany. On April 23, 1945, the 25-year-old received the Medal of Honor from Lt. Gen. Alexander M. Patch III at Zepman Stadium in Nuremberg. During the ceremony, Patch said that Dunham’s actions saved the lives of 120 pinned-down US soldiers.

Dunham also earned France’s Croix de Guerre and several other accolades. However, he was always quick to remind others that his brother, who also fought in the unit, received every decoration he did, except the Medal of Honor. About two weeks after the medal ceremony, the war in Europe ended and their unit was sent home. 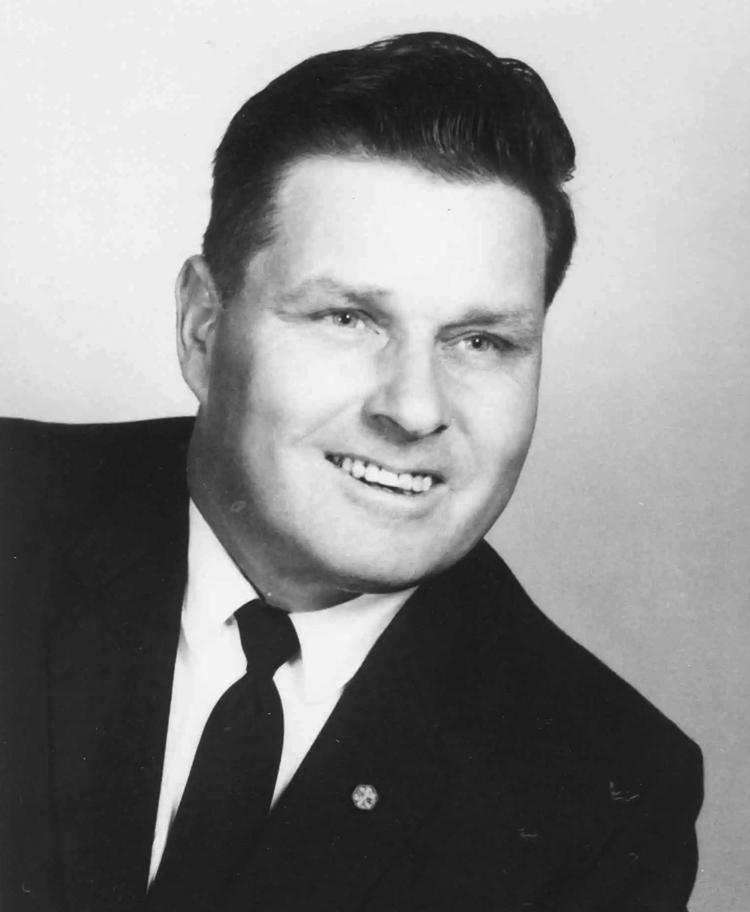 army tech Sgt. Russell E. Dunham, who earned the Medal of Honor for actions in France in 1945, spent 32 years working for what was then called the Veterans Administration after his service.

When Dunham left the Army, he returned to Illinois and got a job working as a benefits counselor for what was then called the Veterans Administration in St. Louis, helping veterans for 32 years before he retired in 1975. To honor his fellow infantrymen, Dunham also pushed to get a monument erected at Jefferson Barracks National Cemetery in St. Louis to honor the soldiers of the 3rd Infantry Division.

Dunham married twice. He had a daughter, Mary Neal, with his first wife, who was also named Mary. He later remarried Wilda Long-Bazzell and helped raise her two children, Annette Wilson and David Bazzell.

His family said he loved to recount his war days to anyone who would listen, including at conventions and for school students.

“A lot of people come home — they don’t want to talk about it, and they have nightmares or something like that,” Annette Wilson said in Dunham’s Chicago Tribune obituary. “He talked about it all the time.”
Dunham died of heart failure at his home in Godfrey, Ill., on April 6, 2009, at age 89. He had moved there from nearby Jerseyville, Ill., only a few weeks before. He was buried in the town’s Valhalla Memorial Park.

HMart plots a new store near an Illinois college campus