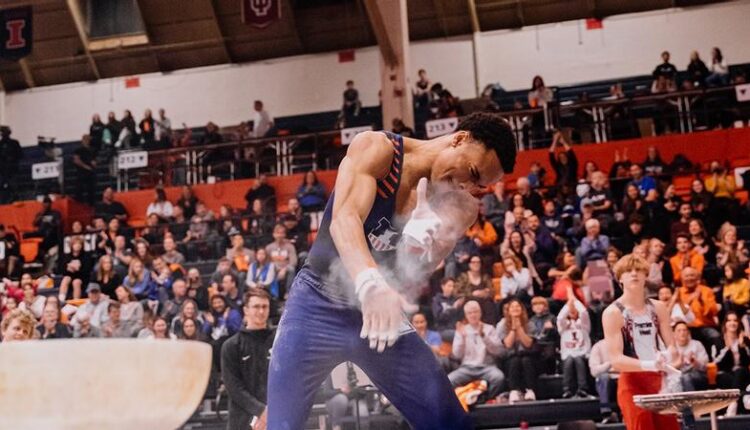 CHAMPAIGN, Ill.— The No. 3 Illinois men’s gymnastics team not only beat Greenville, 368.350-395.350, but also swept in each event on Saturday afternoon at Huff Hall on its annual Pride Night.

“With a pretty perfect performance at the Windy City Invitational last week, we had the opportunity to confront some really challenging moments in our meet today,” head coach Daniel Ribeiro said. “I am really proud of how this team responded to those challenges. We had a really heavy week of training and to be able to fight back the way they did in the face of those challenges shows me how strong this team is going to be this years.”

The Illini came in swinging on floor, with Connor McCool claiming the title with a 14.150. Sophomore transfer Amari Sewell also had a breakout performance, breaking his previous career-high of 12,850 by a landslide with a 13,600 performance.

Illinois didn’t ease up moving onto pommel horse, with star Ian Skirkey earning a 14,350 and first place. Freshman Connor Micklos was right behind him with a 13,300 on the event.

The next fatal blow came from the Orange and Blue’s still rings performance with last year’s Big Ten champion, Ashton Anaya, breaking his previous record with a 14,450 and getting first place. Ethan Boder and Josh Cook had stellar performances, both earning a 13,700.

The Illini had three performances above a 14 on vault – Cook earning a 14,300, Evan Manivong getting a 14,050 and Sewell coming in at the anchor spot earning a 14,450 and winning the title for the second week in a row.

David Pochinka was the highest scorer on the parallel bars, earning a solid 14,000 and the first place spot. Will Hauke ​​was in a close second, earning a 13,650.

In the final rotation, Cook came in hot with a 13,800 on high bar, taking first place and sealing the deal for the Illini sweep. Sewell also had a strong high bar performance with a 13,000.

Illinois will now head to the southwest to face Oklahoma on Jan. 28 in Norman, Okla.