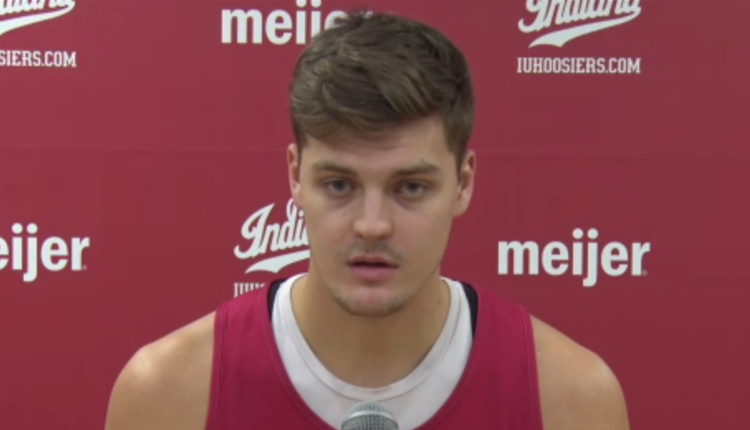 Watch and read what Indiana fifth-year forward Miller Kopp said Tuesday afternoon ahead of the Hoosiers’ road game at Illinois on Thursday night in Champaign, Illinois.

Is there anything you can do to get more open looks in games?

“I feel like I’m trying to do everything I can, because at the end of the day, the offense revolves around Trayce and Jalen Hood-Schifino with the ball screens now, too. So for me, there’s nothing more I can do — I watch film with the coaches all the time about where I can hopefully get more shots, in terms of my spacing, in terms of how I move without the ball, and how I move off of other guys driving and kicking.Just giving guys good angle and potential opportunities to get open looks.

How do you stay in rhythm when not getting consistent shots?

“Just focusing on defense, being a great team defender. You can get lost in the game on the defensive end, and it may not show up in the box score, but being vocal and being a leader out there in terms of what we’ re trying to do defensively and talking the whole possession and leading guys and making sure everybody’s where they’re supposed to be at. So that’s how I can kind of stay in the game.

“As far as my shot, when I got my first shot 28 minutes into the game, I don’t really think of it. If I see some daylight, it’s going up. I’ve put the work in outside of practice and stuff , and I feel like if I get a shot at the end of the game or right at the start of the game, I feel good about it.”

How are you approaching your final college season?

“I’m just playing free. I realize that basketball, I’ve given so much of my life to this game and sacrificed so much to get here, to Indiana. Really, to make it to Northwestern then to make it here. I realize that at the end of the day it’s just a game, and I love it and work at it every single day, and I’m always working at it, always trying to improve.

“But it’s something that you can’t put all your chips into in terms of mentally and emotionally because there’s ups and there’s downs. And you can’t control a lot of what happens in games, but you can control your mindset and how you think of things when they happen and how you respond. So this season I’m just playing free and playing my role.

“After the (Wisconsin) game, I was walking when the horn went off and one of the GA’s said, ‘Way to play your role.’ And that was it, it kind of put into perspective again, like, my role is not to come off and shoot 20 times a game, my role is to help a team win, and I got off a shot when my team needed it, and that’s my role, that’s my job. So it’s about accepting what’s in front of me and accepting it.”

What changed defensively against Wisconsin, and how can IU replicate it?

“The biggest thing for us was our sense of urgency. We came into the game with obviously our backs against the wall, where we knew we had to come out and defend, which is our calling card. That’s what we know we had success in last season, and we just had to come out with a sense of urgency defensively and set the tone there first, and the rest of the game would come where it should.So that’s really the focus that we had.

“Because game plan is game plan stuff, but at the end of the day it’s about the Jimmy’s and Joe’s, not the X’s and O’s.”

How long did it take to adjust playing without Xavier Johnson, Race Thompson?

“We’re still in that adjustment period, I’ll tell you that right now. Losing those two guys, and for me as a shooter and as a guy who relies on the offense and the system and the guys, the point guard to find me, shoot, I miss X and I miss Race, too.So it’s one of those things where I felt that impact pretty quickly just as a shooter.

“But it’s something that we’re still going through. I mean, every day in practice we’re going to hopefully inch closer and closer to where we want to be in terms of playing without those guys. It’s not ideal, you lose two Guys like that that play 30 minutes a game, there’s gonna be some bumps. That’s just the reality. You look at any team in the country who loses two main guys, it’s tough.

For us, it’s really about figuring out how we can maximize what we have right now, and that’s what we’re doing.”

“I think we’ve all got it inside of us because we’ve had some very competitive days of practice. But I think what they’ve done recently is kind of letting us compete more in practice, even though we just went through a crazy stretch of games and we’re about to go into another one. We still practice really hard and go live. It’s all gas, no breaks. That’s one of the biggest differences I’ve seen.”

know the risks and symptoms