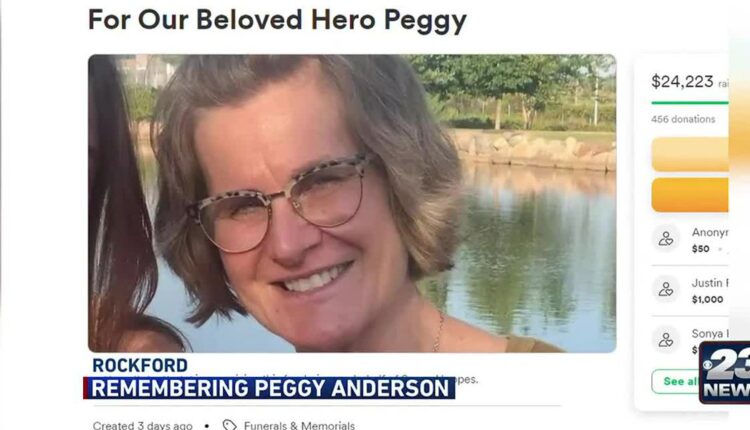 ROCKFORD, Ill. (WIFR) – A loving mother, grandmother and friend, 63-year-old Peggy Anderson is described by her brother-in-law Keith Harmon as a shining light for her family and her community.

Harmon thinks her death leaves a hole in the hearts of everyone she touched.

“How do you explain to someone who’s nine and five that grandma’s not picking them up today?” Harmon said.

Anderson was shot outside Pinnon’s Foods on North Court Street as she left the building. 40-year-old William Jones is charged with her death.

“We want to make sure that our voices are heard as a family unit that this was wrong,” said Harmon. “And we’re not gonna stand by and not have people know what has happened to us. Her children, her grandchildren are devastated, as is the community.”

The community set up a gofundme to ease the financial burdens like funeral costs for the family. The goal was $10,000 but donations surpassed that, climbing to more than $24,000. Restaurants around the area, like Olympic Tavern, also plan to donate some of the proceeds from customer orders.

“People are donating people are opening up venues for us to be able to utilize. It’s really overwhelming to see the support and the people that are reaching out,” Harmon told 23 News.

A public visitation for Anderson will start at 9 am Thursday, January 19. It will be held at The Cathedral of St. Peter on North Church Street in Rockford, followed by a mass at 10:30 am

Jones is still at large. Anyone with information about his whereabouts is asked to call local law enforcement or crime stoppers.