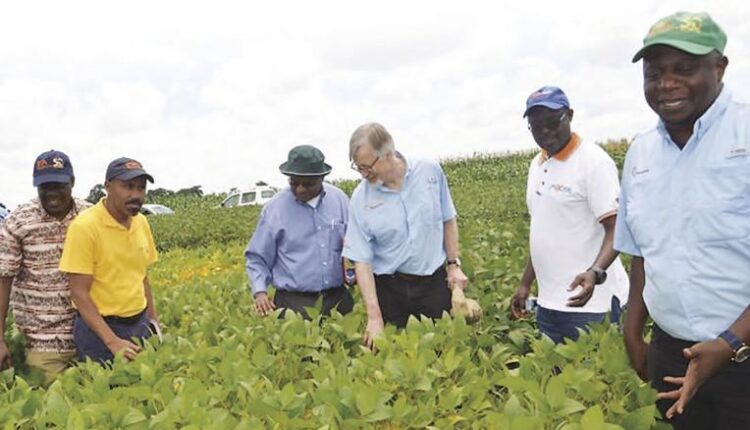 RANTOUL – Research on the means to feed the developing world is fine but won’t be of much help if not put into practice.

Peter Goldsmith, Director of the University of Illinois Soybean Innovation Lab, uses a scene from the 1995 film “Apollo 13” to illustrate this point.

The film describes how the mission to the moon was canceled in 1970 when an oxygen tank in the service module failed and threatened the lives of the astronauts. NASA engineers had found a way to bring the spaceship two-thirds back to Earth.

“Ed Harris (NASA Flight Director Gene Kranz) said, ‘This is unacceptable. You have to finish, ‘”said Goldsmith. “‘You have to bring her all the way back.'”

Similarly, if a number of university researchers have found a way to produce more food, if they can’t put that food on their tables, it doesn’t matter to people who are malnourished, Goldsmith said. In other words, research is no good without development.

That’s why the U.S. Agency for International Development has awarded the Soybean Innovation Lab a $ 5 million grant to train and empower other Feed the Future innovation labs to make a difference and help them find a solution help.

“There is a cultural shift within USAID and those who work with research being a means to an end, not an end in itself,” Goldsmith says. “That’s a big change.”

It has been criticized that the money USAID invests in research is not having a lasting effect. The advanced program is intended to solve this problem.

The program began with an initial investment of $ 1 million by USAID in the Soybean Innovation Lab to develop a beta version of the curriculum for teaching design. What the laboratory technology manager has learned is implemented in the larger program.

The new program encourages everyone to “look into the product life cycle; that not only phase 1 is important to us, but also phases 7 and 8, ”said Goldsmith.

He said that individuals trained as researchers need additional skills to make the project “to scale” – an impact sufficient to affect many people.

He said there will likely be opposition to the change. But Goldsmith said the philosophical change was necessary.

The award is based on an innovation-to-impact model developed by the Soybean Innovation Lab. It focuses on needs first and works backwards to develop the products and services to improve operations and organizations.

A model is used where customers are listened to and worked together to develop an easy-to-use solution that they can use.

“It teaches us as a faculty that if you want to work with USAID and deal with issues like poverty and malnutrition, you have to be a finisher. You can’t just be a beginner, ”Goldsmith said. “It’s a big cultural change. It’s also very exciting. “

The new five-year project will use a platform called “just-in-time learning”. It is web-based and supports technology managers of innovation laboratories with the skills and knowledge to turn their research into reality. It will also enable donors with a management system to track the returns on research investments.

There are 24 innovation labs USAID uses at universities across the country to run the big programs. Goldsmith’s lab happens to be doing soybean innovations. Another at Kansas State University is studying sorghum.

Goldsmith said the program will go into effect in the first quarter of next year.

“It’s the human and technical side of USAID’s operations management,” he said. “Your mission is to end poverty and malnutrition in developing countries, and the University of Illinois is helping them be more effective.”