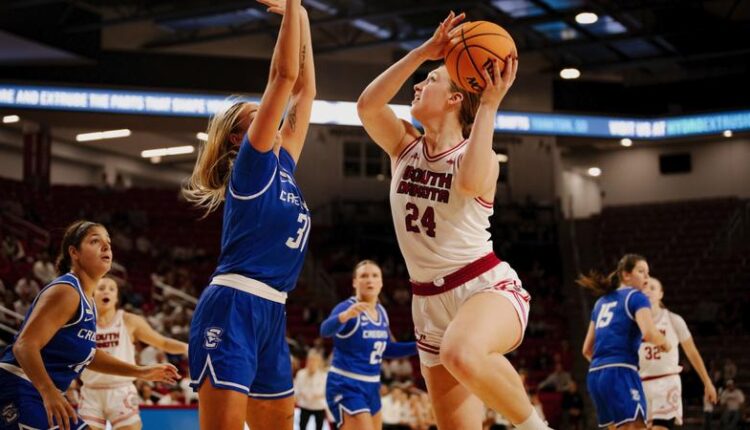 VERMILLION, SD—No. 21 Creighton got 21 points and 10 rebounds from Morgan Maly and 16 points and four assists from Molly Mogensen in a 74-51 win against South Dakota Thursday inside the Sanford Coyote Sports Center.

Creighton moved to 2-0 with the win, topping both South Dakota State and South Dakota on the road. The Bluejays ended a six-game losing streak to USD dating back to the 2013-14 campaign. The Coyotes (1-1) saw the nation’s seventh-longest home winning streak of 14 games come to an end. South Dakota lost inside the Sanford Coyote Sports Center for just the sixth time in 85 games.

South Dakota led 19-12 after the first quarter, but was held scoreless for the final 8:20 of the second. Creighton outscored the Coyotes 21-3 in the frame. Maly and Mogensen combined for 19 first-half points while South Dakota was 8-of-25 from the field and had 10 turnovers.

Grace Larkins, who led South Dakota with 20 points, hit a 3-pointer and Madison Grange made two free throws to start the second half that trimmed the deficit to six. But Mogensen countered with a three and Maly converted a three-point play to push the lead back to 12. Creighton led by double-digits the rest of the way. Both Mogensen and Maly equaled their career-high point totals.

“We played a quality opponent and a top-25 team in Creighton, and I was proud of how fearless we played in the first quarter,” said USD head coach Kayla Karius. “We started out really strong, and we were the most aggressive team on the floor.

“I felt like it was a back-and-forth battle, and a lot of great lessons were learned throughout the game. We struggled to score in the second quarter, which hurt us, but coming out of halftime, I felt like we showed some toughness and fight. We will use this experience to grow and get ready for our next opponent.”

Hempe had eight points and Jeniah Ugofsky provided a post presence with seven points and six rebounds. Larkins led the Coyotes’ with six boards, two assists, two steals and a block to go with her second collegiate 20-point scoring night.

South Dakota hits the road for the first time under Karius. The Coyotes face Bradley at 2 pm Sunday in Peoria, Illinois. The Braves dropped an 83-38 decision at Missouri Thursday in their season opener.

Church festival, veteran events among Clark, Champaign things to do this weekend