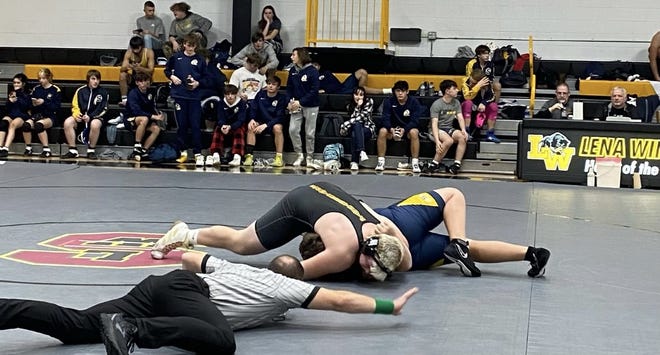 Lena-Winslow/Stockton senior heavyweight Henry Engel has opened the wrestling season on such a tear that a vast majority of his early-season opponents haven’t even gotten a chance to work up a sweat before they were pinned to the mat.

And now he has yet another school record in his crosshairs.

“I hate long matches,” said Engel, who set the school record with a 5-second pin last year, and already has a 10- and 12-second pin this year. “And a lot of my moves are based on strength and power, and those kinds of moves can a lot of times end in a pin.”

Engel is 17-2 on the season and has 11 first-period pins, including 10 in under a minute, and seven in 30 seconds or less. Now Engel and the PantherHawks are off until Abe’s Rumble in Springfield on Dec. 29-30, a 60-team dual-style meet with some stiff competition at every weight class, but he will continue to work on his craft, looking to sharpen his skills.

“Oh sure, we talk about it,” Engel said of conversations between Luke and him about the record. “And we both want it. It’s fun that we’re both chasing it, and we both want it. Griffin is probably the best wrestler I know, so to be chasing something with him is pretty cool.

Engel was an all-state lineman who started on both sides of the ball and helped lead Lena-Winslow to his third straight state football title. But that means Engel is one of several who is conditioning in the wrong way all the way until deep into wrestling season.

“Football shape means you can go hard for about seven seconds, then take a break, and do that over and over and over,” Engel explained. “But in wrestling, you just go, and go and go, and don’t stop until the match is over. It’s a completely different kind of conditioning, for sure.

“I’m not the most skilled wrestler out there, but I know how to use my strength.”

Using mostly bear hugs, hip tosses and other tosses, Engel has made quick work out of most of his foes this year. He did lose to Oregon’s Evan Flaherty early in the season and then dropped a match last weekend while taking second in the Erie Invitational, but he’s still off to a solid start.

More:Eastland home-schooler playing on basketball team is ‘win-win for everybody’

“Henry has really wrestled well since the first day he stepped in, which isn’t easy after a football season like that one,” said Le-Win/Stockton head coach Kevin Milder, who is also the longtime Le-Win defensive coordinator in football. “And he’s just a beast in the weight room, so he’s just over-powering a lot of these guys.”

Engel is 6-foot-3, 260 pounds right now after he fell one win short of qualifying for state at 220 pounds last season. He appears ready to take it to the next level this season.

“It’s a long way to go, but I’ll be ready,” Engel said. “I’m just trying to get myself ready for the long haul now.

“And have some fun along the way.”