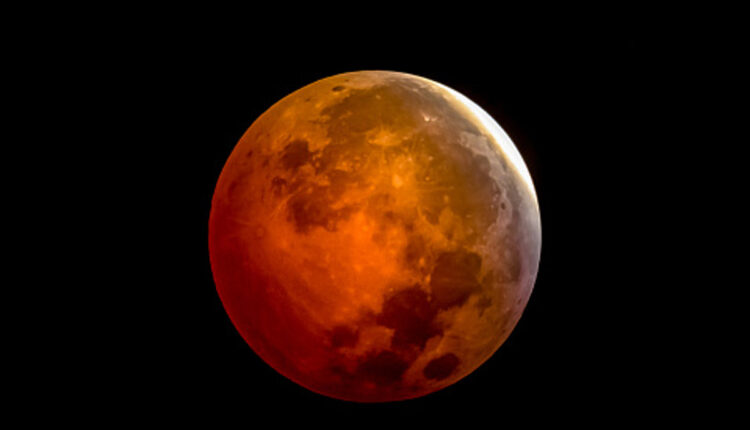 If you enjoy looking at the sky for a celestial show, you should know that Illinois is getting a chance to see not one, but two lunar eclipses this year. The first one happens this Sunday night, and best of all, at a fairly reasonable hour.

The second eclipse happens on Tuesday, November 8th, which just happens to coincide with Election Day.

We’ve got plenty of time to prep for the November eclipse, so let’s focus on the one we’ll see this coming weekend. Weather permitting, Rockford’s skies should look something like this:

The Color Of The Moon Should Be Blood Red (That’s Why It’s Called A Blood Moon), Which Is What Happens During A Total Lunar Eclipse

Lunar eclipses can only happen during a full moon, when the sun fully illuminates the surface. Usually a full moon has no eclipse because the moon orbits in a slightly different plane than the Earth and the sun do. However, at times the planes coincide. Earth passes in between the moon and the sun and cuts off the sunlight, causing an eclipse.

The Blood Moon total lunar eclipse will get started Saturday night, with the full eclipse happening early Sunday morning. The whole event, from start to finish, will probably take about 3-4 hours.

A family enjoying the 2018 lunar eclipse.

Let’s Get To The Important Stuff, Like When You Should Go Outside To Look

As I mentioned earlier, this weekend’s sky show starts and ends at a time that shouldn’t throw your body clock off for the next week.

Chicago’s famous Adler Planetarium says this should be the timeline of events, starting this Saturday night (all times are local):

LOOK! You or Someone You Know Might Be Visible on Google Street View!

If you’ve traveled through some of Illinois’ big cities over the last year or so you may have been made famous by the Google Maps Car.

READ ON: Weird, wild UFO sightings from throughout history