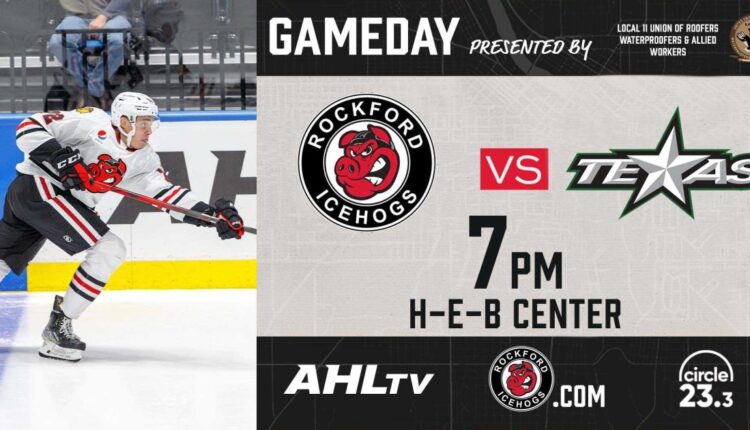 Hitting the road for the first time since opening weekend, the Rockford IceHogs meet the Texas Stars tonight at 7 p.m. at the HEB Center in Cedar Park, Texas. The clubs will collide eight times in the 2022-23 campaign. Grab the latest game info in the Roofers and Waterproofers Local 11 Game Preview.

Players to Watch
After nine games, forwards David Gust (5G, 8A) and Brett Seney (6G, 7A) lead the IceHogs in points this season at 13. Trailing Gust and Seney, forward Luke Reichel (5G, 6A) has 11 points.

Texas is led by Riley Barber (7G, 5A) who paces the Stars in goals and points. Former IceHogs forward Tanner Kero ranks second on the Stars with 11 points and leads the team with nine assists.

Last game highlights
The IceHogs fell to the Iowa Wild in a 5-4 shootout. Forward Luke Philp scored the Hogs’ first goal of the night on the power play to tie the game at one in the first period, his first of two tallies on the advantage for the night. Brett Seney other Michael Teply tallied for the Hogs while Louis Crevier, Buddy Robinson, Jakub Galvas, Alex Vlasic, other mike hardman all notched assists on the night.

Putting The “Ohhh!” in offense
After a slow start to the season offensively, the IceHogs have picked things up over the past five games. Rockford totaled just nine goals in their first four contests (2.25 goals per game), including notching goals in just four of the season’s first 13 periods. Since, the IceHogs have tallied in 12 of their last 14 periods, totaling 25 goals over the past five outings (5.00 goals per game).

Galvas Helping
Second-year defenseman Jakub Galvas assisted on a career-high three goals in last Sunday’s 5-4 shootout loss to Iowa. Over his past five games, the d-man has four multi-point efforts, totaling 1G, 8A. Overall, Galvas ranks sixth in the AHL with nine points on the young season.

Hogs on the move
The Chicago Blackhawks announced on Tuesday that they have assigned goaltender Dylan Wells to the Rockford IceHogs of the American Hockey League. Wells made his NHL debut with the Blackhawks during Saturday’s game in Winnipeg, stopping 12 of 13 shots. He is 1-1-0 with Rockford so far this season, posting a 4.27 goals-against average and .862 save percentage. In a corresponding move, goalie Owen Savory was released from his PTO and returned to Fort Wayne (ECHL). defenseman Ian Mitchell was also activated from the Injured Reserve and assigned by the Blackhawks to Rockford where he could make his season debut this weekend in Texas.

IceHogs Stars Renew Rivalry
The IceHogs and the Stars battle for the first time tonight in the 2022-23 season and first since Rockford knocked Texas out of the Calder Cup Playoffs last season. Currently tied for second place, the Stars will face the Hogs seven more times this campaign. The Hogs hold an all-time record of 32-21-4-4 against the Stars.

Next home game
Join the Rockford IceHogs on Friday, November 18 at 7 pm for World Cup Kickoff Night versus the Chicago Wolves. Add $10 to your ticket to get an exclusive IceHogs USA World Cup Scarf by using code WC2022. It’s also our next $2 Beer Night! Start off the weekend with $2 Bud Light, Budweiser, and Busch Light. Get tickets now!

Tune In LIVE on the IceHogs Broadcast Network Presented by BMO
Watch and listen to every game this season on the IceHogs Broadcast Network presented by BMO! Listen from your favorite device, at home, or on the road at IceHogs.com and on the IceHogs app and watch LIVE on AHLTV and selected games on 23.3 CircleTV! Fans can also tune in on all of Mid-West Family’s local stations including 104.9 The X, B103, 95.3 The Bull, and Rockford Greatest Hits 100.5 and featured on Rock River Current, the Stateline’s premiere source for local events, news and culture.