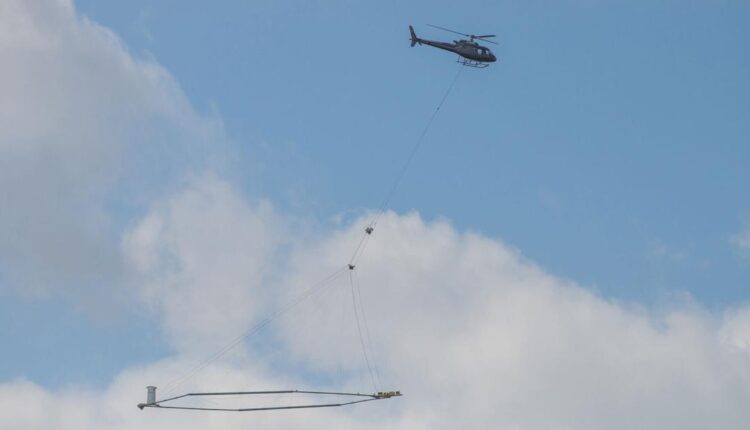 Scientists will take to the sky over much of Champaign County to get a closer look below the earth later this month.

Area residents shouldn’t be alarmed if they spy a fast-moving helicopter towing what looks like a trampoline frame.

Beginning Nov. 19, as part of a project contracted by the Illinois State Geological Survey at the University of Illinois and funded by Champaign County, the helicopter will be mapping most of the county to provide a three-dimensional look at the Mahomet aquifer, which supplies hundreds of millions of gallons of water per day to East Central Illinois.

The coil frame suspended about 115 feet off the ground will be towed by the helicopter flown at speeds of 100 to 150 mph in a grid throughout most of the county. It will not be flown over Champaign, Urbana or Savoy because steel buildings interfere with the electromagnetic charge.

The magnetic exposure from the equipment does not pose a safety risk to people, according to the Geological Survey.

“This will be the first time this has been done in (downstate) Illinois,” said Kisa Mwakanyamale, associate research scientist, geophysics, Illinois State Geological Survey.

The method was also used to map the thickness of the Illinois near-shore zone of Lake Michigan, a project funded by the National Oceanic and Atmospheric Administration.

“The Water Survey has been studying the Mahomet aquifer for some time. Each time they have drilled bore holes,” Mwakanyamale said.

This is how the SkyTEM system works: Airborne electromagnetic technology is used to measure subtle changes in materials such as sand and clay and define aquifer boundaries. The images will be used to create a 3D picture of what the aquifer looks like down to 1,000 feet underground.

“The benefit of this technology is it will map the entire aquifer and once and for all show how much is non-aquifer material,” Mwakanyamale said.

Use of helicopter-based time-domain electromagnetic technology to map and characterize the aquifer was one of the top recommendations made by the Mahomet Aquifer Protection Task Force.

Up until now, the information about the aquifer has been provided by water-well drillers and exploratory drilling for geologic mapping projects. But Mwakanyamale said that provides only a partial picture.

The project will be funded by American Rescue Plan funds awarded to Champaign County for infrastructure projects related to clean drinking water. The Champaign County executive and county board approved a proposal for $500,000 to fund the project.

“Potable water is vital for public health and safety and essential for agricultural and industrial economy in perpetuity,” county board member Chris Stohr, who first proposed the project funding, said. “Residents of urban and rural Champaign County know that their drinking water comes from the Mahomet aquifer and that it is the sole source of water for much of East Central Illinois.”

YU to Take On Illinois-Wesleyan in Rematch of DIII Powerhouses