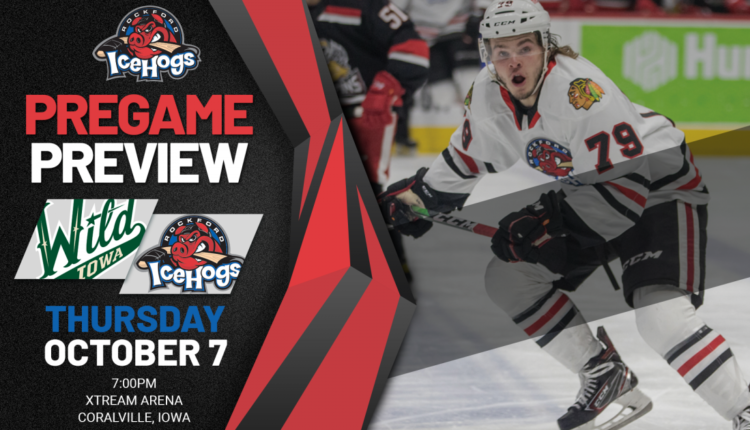 Rockford, IL – The Rockford IceHogs are visiting the Iowa Wild tonight at 7:00 a.m. at the Xtreme Arena in Coralville, Iowa to open their preseason schedule for two games. The two clubs will compete against each other again tomorrow evening in the Xtreme Arena.

Tune in LIVE on the IceHogs Broadcast Network, presented by BMO Harris Bank

Listen to the game tonight and every game this season on the IceHogs Broadcast Network, presented by BMO Harris Bank! Listen from your favorite device at home or on the go on IceHogs.com and in the IceHogs app!

Tonight’s and tomorrow’s showdowns mark the first time the IceHogs battle the wild in the preseason. For 14 seasons, the IceHogs are 12-12-0-4 in preseason action, while the Wild are 8-5-1-0 over eight seasons.

Shake off the offseason rust

These two preseason games against Iowa will be the only votes for both clubs before the 2021/22 season begins. The IceHogs competed in a preseason game prior to last season (losing 1-6 in Chicago) after failing to play preseason games prior to the 2019-20 and 2018-19 seasons. The Wild did not participate in preseason hockey last season.

The IceHogs and Wild collided 10 times during the shortened 2021 season, with the IceHogs holding a 4-5-1-0 head-to-head record. The season streak features the IceHogs’ biggest win of the season, a 6-1 triumph at Rockford on March 21st. The Wild also took their biggest win of the campaign during their streak against the IceHogs, ironically with a 6-1 win on May 7 at Rockford. On April 24th, the IceHogs snapped up the nine home games of the Wild winning streak against their rivals from the Central Division with a 5-3 win at the Wells Fargo Arena.

Tonight, professional hockey will be played for the first time at the Xtreme Arena in Coralville, Iowa. The brand new, 5,100-seat facility will host ECHL’s Iowa Heartlanders for their inaugural 2021-22 season and is currently the home of the University of Iowa’s volleyball programs.

The Rockford IceHogs open the 2021-22 season on Friday October 15th against the Grand Rapids Griffins at 6:00 p.m. CT at the Van Andel Arena in Grand Rapids, Michigan, and continue their season-opening road trip with six games Saturday October 16 against the Chicago Wolves at 7:00 p.m. at Allstate Arena in Rosemont, Illinois.

Tune in to every show for for free
and from somewhere at IceHogs.com, the IceHogs app!

Our Covid Cocoon: The Parents Aren’t Alright (But Help May Be Coming)

Frost possible for an early Sunday before it gets warm by…