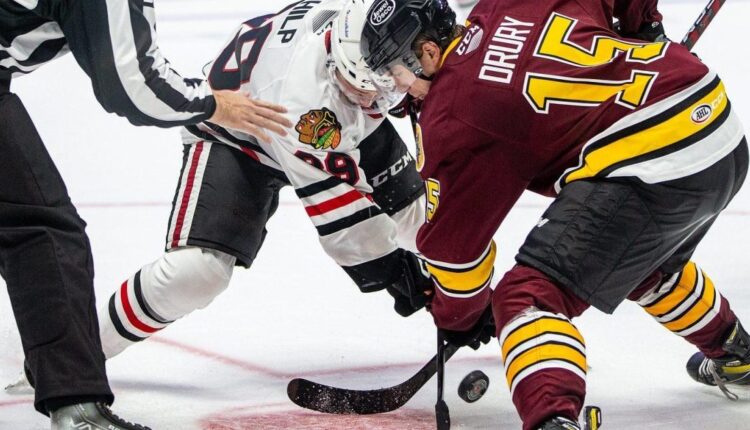 After a successful Opening Act block party with Hard Rock Casino-Rockford, the Rockford IceHogs (1-2-0-0) fell 4-1 to the Chicago Wolves (1-2-0-0) Saturday evening at the BMO Center. Forward Luke Reichel riled up the crowd with his second goal of the season on the power play in the second period. Recap & Highlights

Forward Morgan Adams-Moisan is tied for the AHL lead with two major penalties and ranks fourth in the AHL with 20 penalty minutes.

$2 Beer Friday’s Return to the BMO Starting This Friday, Oct. 28!
Kick off the weekend with $2 beers on $2 Beer Fridays starting this friday, october 28 against the Chicago Wolves at 7 pm The $2 beers can be purchased at most concession stands on the concourse through the end of the second intermission. Buy $2 Beer Friday Tickets Here!

Home, Sweet Home
The IceHogs continue on their season-long, seven-game homestand this weekend against the Wolves and Senators at the BMO. The homestand stretches to Nov. 6 and after this run, the most consecutive home games the IceHogs will have the rest of the season is three (Dec. 7-10, Jan. 18-21, Jan. 31-Feb. 4, Mar .15-18). The longest road trip the IceHogs partake in this season is five games (Mar. 1-11).

Phillips Closes in on 100 Pro Games
This Friday, IceHog’s defenseman Isaac Phillips looks to skate in his 100th professional contest and currently sits at 95 contests in an IceHogs uniform (12G, 22A) alongside forward Dylan Sikura (31G, 38A). They both look to become the 88th and 89th skaters in AHL team history to reach the 100 mark.

Clendening Chips Away at IceHog’s Assist Record
With an assist over the weekend, IceHog’s defenseman Adam Clendening is now 11 assists away from tying the all-time IceHogs assists mark set by forward Brandon Pirri (135). He currently ranks fourth all-time in IceHogs points (150) and is seven away from tying Mark McNeill for third place.