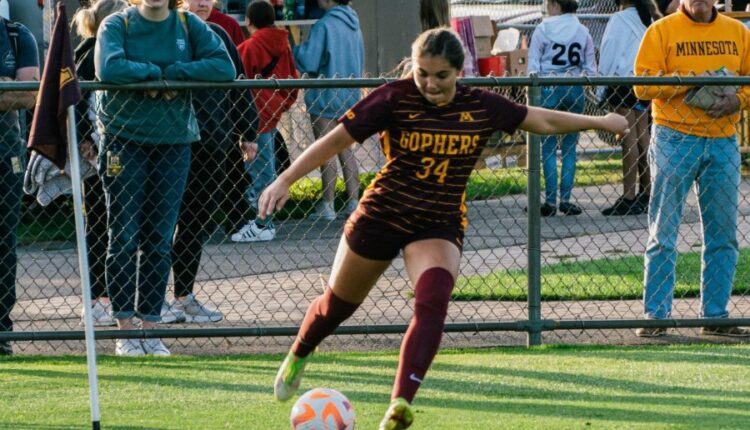 Minnesota wins two of three games in the back half of the season.

Forward Kyah Harper goes for a corner kick during the Gophers’ game against Indiana, Thursday, Sept. 22.

Minnesota traveled to Piscataway, New Jersey, to face eighth-ranked Rutgers. Minnesota, unranked, had just landed a playoff spot in the Big Ten standings, so this game was important to help maintain their newfound position.

Rutgers wasted almost no time showing why they were ranked top 10 in the nation; Riley Tiernan scored less than three minutes into the match. Minnesota’s Sophia Boman spoiled Rutgers’ early momentum with her strike from the top of the box to even the score at 1-1.

The game remained even until Rutger’s Allison Lynch scored her first goal of the season to give the Scarlet Knights their second lead of the match. Again, the Gopher’s resilience showed, and Gabbie Cesarone evened the game at 2-2 just before the 60th minute.

Cesarone’s fifth goal of the season was the final goal in this match as Minnesota tied Rutgers 2-2. The one point Minnesota picked up in the tie was significant as it helped them protect their spot in eighth place in the Big Ten.

In the United Soccer Coaches NCAA rankings, as of Oct. 16, Rutgers is ranked fourthteenth.

Sunday, the Gophers continued their road endeavors as they faced Maryland in College Park.

Sophia Romine opened the scoring for Minnesota approximately ten minutes into the match. Megan Gray delivered an incredible cross to Romine, who placed a volley to the top left corner of the goal.

The game remained even until the final fifteen seconds of the first half. Cesarone then headed in a free kick for her sixth goal of the season, marking the third-straight game in which she has scored.

Minnesota would hold off Maryland and claim their third victory in the Big Ten by a score of 2-1.

On Thursday, Minnesota returned to St. Paul to take on Purdue in their final home game of the season. The Boilermakers were winless heading into this matchup and sat in twelfth place in the Big Ten standings.

The Gophers, on the other hand, were 3-4-1 entering this game. A win would secure them thirteen points and a playoff spot.

Minnesota was quick to impress the home crowd as Romine opened the scoring in the eighth minute. Boman and Cesarone set up Ronnie’s fourth goal of the season. On a corner kick, Boman crossed the ball to Cesarone, who set up Romine for the shot.

First-year Gopher Romine wasn’t done yet. In the 22nd minute, the Gophers received another corner kick. McKenna Buisman found Cesarone, and yet again, she set up Romine to score her fifth goal of the season.

No goals were scored after Romine’s second of the game, and the Gophers defeated the Boilermakers 2-0.

Minnesota’s offense was firing on all cylinders Thursday night; they put up 12 shots on target. Goalkeeper Megan Plaschko also earned her sixth shutout of the season with three saves against the Boilermakers.

Romine and Cesarone were astonishing this past week, scoring three and two goals respectively. The entire squad was structurally sound as well, only concluding three goals.

The Gophers are now 4-4-1 in the Big Ten standings and hold the head-to-head advantage over Iowa, eliminating the Hawkeyes from playoff contention. This is Minnesota’s first time clinching the Big Ten tournament since 2018 when they entered as the seventh seed.

With their current position in the Big Ten standings, the Gophers are matched up against first-place Michigan State. The Spartans solidified their title as Big Ten champions after their 1-0 victory over Ohio State on Thursday. Michigan State is 8-0-1 in conference play and ranked sixth on the United Soccer Coaches NCAA rankings.

Minnesota will travel to Champaign, Illinois, to take on the Illini in their final game of the regular season on Oct. 23

Drivers in Decline: A Shortage of Volunteers Complicates Access to Care in Rural America