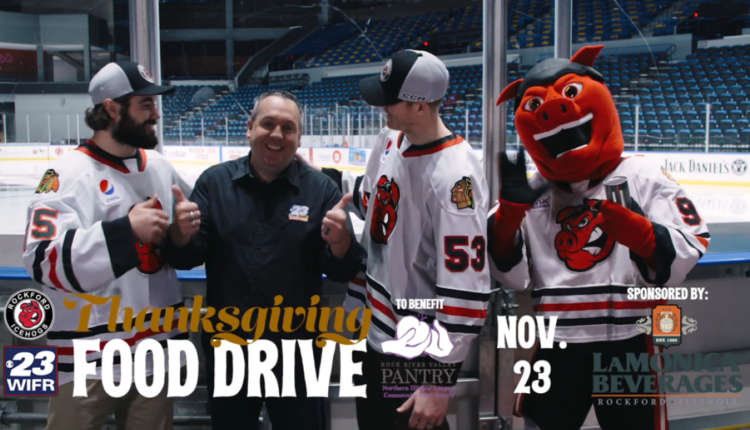 The Rockford IceHogs, WIFR, and Lamonica Beverages have teamed up to host a food drive to benefit the Rock River Valley Pantry. Fans who bring a non-perishable food item to the IceHogs Wednesday, November 23 game will receive a free ticket to the IceHogs December 7 game, while fans 21 and over who donate will receive the free ticket and a Chicago Blackhawks Pale Ale koozie. Tickets and koozies will be limited to one per person who donates regardless of the number of items donated.

The IceHogs will battle the Texas Stars at 7 pm on November 23. It’s also the first Whet Your Whistle Wednesday of the season. Fans can get a ticket to the game and two drink tickets (good for beer, soft drinks, or water) for just $20 for every IceHogs Wednesday home game at the BMO Center this season. To unlock the offer on Ticketmaster, use code WYWED.

November 23 is also a Winning Weekday – if the IceHogs win that night all fans will receive a voucher for a future weekday (M-TH) game. Get tickets now!

The Rock River Valley Pantry is the largest community-based food pantry in Northern Illinois, distributing needed food from two locations five days a week. They provide more than a million pounds of food each year to people in the Rock River Valley community who would otherwise go hungry.