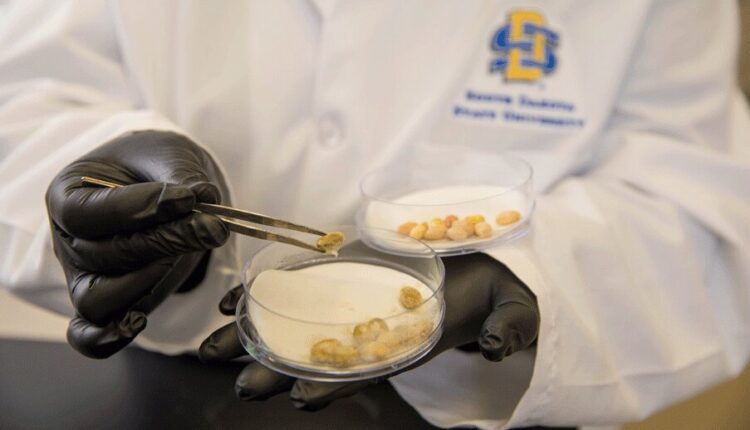 The sprouting soybeans, in front, have been inoculated with a pathogen to trigger the production of glyceollins, which have antimicrobial properties. The expansion of these laboratory tests at the POET Bioproducts Institute could result in the incorporation of glycoline-rich soybeans into animal feed to prevent disease and reduce the need for antibiotics. Photo credit: South Dakota State University

Antimicrobial compounds that soybean plants produce when threatened by insects, disease, and even drought can help animals stay healthy, reducing the need for antibiotics.

“When a soybean is attacked by a pathogen, the plant produces phytochemicals called glyceollins as a defense mechanism,” explains Assistant Professor Bishnu Karki from the Department of Biology and Microbiology at South Dakota State University. Her research group has identified laboratory-scale pathogens and processes to trigger the production of glyceollins and has begun evaluating soybean varieties to see which produce higher concentrations of the antimicrobial compounds.

“Animals like pigs and poultry are already consuming soybeans and could benefit from the phytochemical’s antimicrobial properties,” said Karki, pointing out that scientists are studying the effects of glyceolline on human health, particularly cancer, inflammation and cardiovascular disease -Diseases diseases.

In the past, antibiotics have been incorporated into animal feed and water to help animals stay healthy and reach market weight efficiently. However, the FDA’s Veterinary Feed Policy, which aims to reduce the development of antibiotic-resistant microorganisms, has recently restricted the use of antibiotics to specific health problems. Therefore, ranchers need natural alternatives such as glyceollin-fortified soybeans, which can offer benefits similar to antibiotics.

Karki and her team worked with research chemist Mark Berhow of the Functional Food Group at the USDA Agricultural Research Service in Peoria, Illinois, to find out how to maximize glyceolline production in soybeans. The goal was to produce at least three milligrams of glyceollins per gram of soybeans, the amount needed for use as an antimicrobial in pig feed.

The researchers found that peeled, sprouted soybeans inoculated with mushrooms produced higher levels of glyceollins than beans in the shell or cut in half. The soybeans are then freeze-dried and ground to determine glyceolline levels. The results, published in the journal Mycological Progress, showed the ability to produce 3.763 mg of glyceolline per gram of soybean. 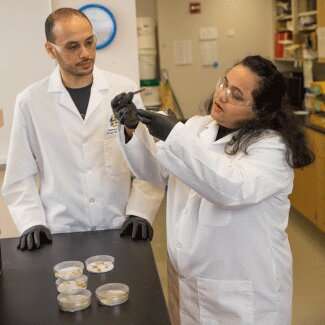 Doctoral student Ahmad Alhomodi, left, and Assistant Professor Bishnu Karki from the Department of Biology and Microbiology examine soybeans that have been inoculated with two different edible mushrooms. The pathogens stress the beans, causing them to produce glyceollins, which have antimicrobial properties. Photo credit: South Dakota State University

In a subsequent study, the researchers evaluated around a dozen soybean varieties, inoculated them with two types of edible mushrooms and incubated them for up to 120 hours. They found that the fungus Aspergillus sojae caused better glyceollin production with peaks of 96 to 120 hours of incubation.

In addition, Karki said, “The variety of soybean makes a difference.” Although a strain’s susceptibility to fungal disease did not increase production, the early maturing strains tended to produce more glyceollins, and exposure to ultraviolet light prior to mushroom inoculation improved these results.

The next step will be to test larger numbers of strains from different states to identify those with higher potential for glyceollins production and then work with breeders to study the genetic pathways through which this occurs.

On to the next level

“We have a laboratory-scale process, but we need to scale it to show it’s feasible,” Karki said, noting that testing to make sure the process was repeatable included up to 100 beans. The new POET Bioproducts Institute in the SDSU research park will play an essential role in scaling this technology. The system should be ready by summer 2023.

“Using naturally occurring compounds to replace antibiotics could fundamentally change animal production. Through the POET Bioproducts Institute, researchers can work with industry partners to bring promising bioprocess technologies like this to market, ”said Distinguished Professor Bill Gibbons, Assistant Dean of Research at the College of Agriculture, Food and Environmental Sciences and Director of the South Dakota Agricultural Experiment Station .

“Glyceollins are made better when soybeans are peeled, but we need to keep the endosperm intact for the seeds to germinate,” she continued. “Commercial peelers can crack the soybeans, so we need to develop a custom machine that can remove the peel without disturbing the endosperm.”

In addition, understanding the metabolic pathways through which soybeans divert energy to produce glyceollins will help scientists manipulate those pathways to increase production of the antimicrobial compound.

“Soybeans are one of the largest commodities in the animal and human nutrition market,” said Karki. If soybeans high in glyceollins can bring health benefits to animals, they may also have the potential to improve human health.

This document is subject to copyright. Except for fair trade for private study or research purposes, no part may be reproduced without written permission. The content is provided for informational purposes only.