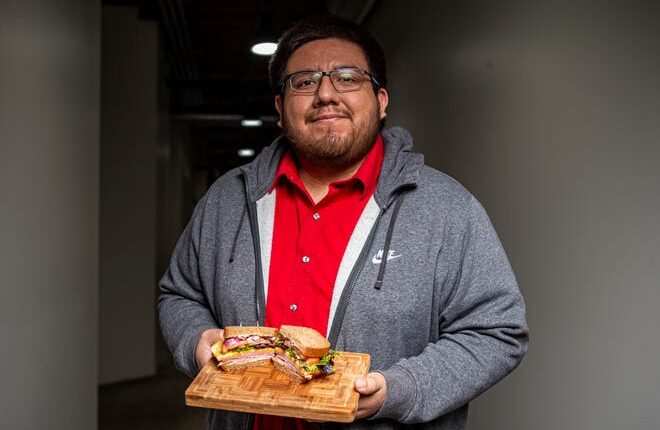 Peer into the tinted storefront windows of a vacant suite at The Bricks and you will see a clean, unfinished space waiting to be drywalled and occupied.

Adrian Martinez, 24, of Cherry Valley, looks at the space and sees himself and three employees making sandwiches, soups and friends in his new business called The Chef’s Sandwich.

“I was planning to do a small catering business out of my home,” he said, “but then I saw this place was leasing spaces, and I was like, ‘Alright. All of my ideas are there. I just need to put them into the shop.'”

Martinez currently works as a cafeteria worker at UW Health’s Swedish American Hospital. He said his restaurant chops come from having previously worked at Portillo’s, Beefaroo and TGI Friday’s.

Martinez, a 19-year resident of the village, said he checked out other storefronts in the Rockford area, but felt the newly built retail and office development located right in the heart of Cherry Valley at East State and Walnut streets was the ideal location.

“It’s a small town, and I live right down the street,” he said. “I feel like I’m doing something for the community.”

The menu for the restaurant, which is expected to open this spring, is still a work in progress, but Martinez said all of the soups such as chicken noodle, chicken tortilla, and broccoli cheddar will be made fresh in-house.

In addition to Philly cheesesteaks, subs, ham and cheese and other sandwiches, Martinez said he and his staff are going to use their imaginations.

“I want to introduce a bunch of weekly specials of whatever myself and my staff create,” he said. “You know, if one of us has an idea of ​​like, ‘Hey, I want to do a sandwich from this country.’ I’ll be like, ‘Okay. Let’s look it up and see what kind of sandwiches they do.’

“We’ll keep it up for like a week. If it’s super popular, maybe another week.”

The Chef’s Sandwich will operate out of a 1,200-square-foot space offering indoor dining and take-out.

To follow the construction progress of the Chef’s Sandwich and its weekly specials, check out the restaurant’s Facebook page.