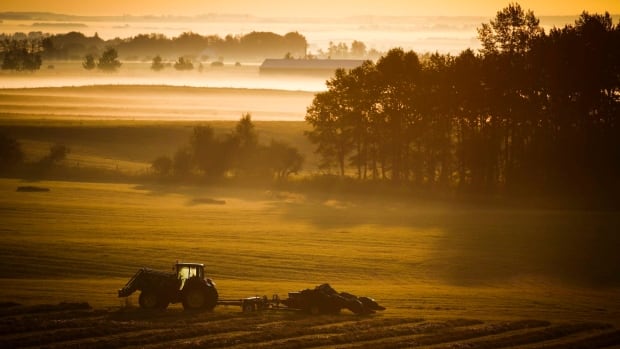 In the Middle Ages, people knew from bitter experience that war and pestilence usually ride together with another horseman: famine.

“We face an unprecedented global hunger crisis,” UN Secretary-General Antonio Guterres warned last month. “In the past two years, the number of severely food‑insecure people around the world has more than doubled to 276 million. There is a real risk that multiple famines will be declared in 2022. And 2023 could be even worse.”

The deal between Russia and Ukraine to unblock the Black Sea ports brought a ray of hope as the week closed.

“Canada’s confidence in Russia’s reliability is pretty much nil,” said Prime Minister Justin Trudeau on Friday. “They have demonstrated nothing but poor faith.”

But, he added, “we are optimistic.”

Food prices have risen across the world — but in Sri Lanka in May, food already cost an average of 57 per cent more than it did just a year earlier, pushing 30 per cent of households into hunger and leading to a public uprising that brought the government crashing down. Since then, things have only grown more desperate.

Local factors in Sri Lanka — such as a ban on the importation of fertilizers — aggravated global factors like the war in Ukraine.

But across the world, those temporary disruptions are playing out against a backdrop of ominous trends that threaten the world’s ability to feed itself in the long term. And Canada is not immune to those trends.

The Canadian census of agriculture revealed this year that farmland in Ontario in 2021 was lost to development at a rate of 319 acres a day — about 240 NFL football fields. That rate of loss is more than three times what it was in the last census in 2016.

Human settlements tend to emerge in places where food can be grown. As they expand, they sprawl over that good farmland.

Mark Reusser raises turkeys and grows crops in Waterloo County, Ont. and is vice-president of the Ontario Federation of Agriculture.

“About 5 per cent of Ontario’s land mass is suitable for agriculture,” he told CBC News. “The rest is Canadian shield and wetlands and boreal forest, and there really isn’t soil or climate to grow crops. So we have this kind of a conflict of interest where people want to live in the same place where there’s good farmland and good climate for growing crops.

“Farmland itself is a non-renewable natural resource. When you pave it over, it’s gone forever. On the other hand, if you look after it, it’s potentially a perpetual resource in that it can grow food forever. We live in a place here in southwestern Ontario … where crops like corn and beans and squash have been grown for over a thousand years.”

Farmland loss is happening in countries around the world.

Canada’s total farm area shrank by just over three per cent between 2016 and 2021. The problem is most acute in Ontario.

The number of farms is also falling and the median age of farmers continues to climb (it’s now 58 years old). That troubling phenomenon has given rise to a kind of farmers’ matchmaking service that seeks to connect older farmers with younger people who are willing to keep their land in production.

Reusser said Canadians need to start thinking in terms of food security when they consider the value of farmland and farmers. 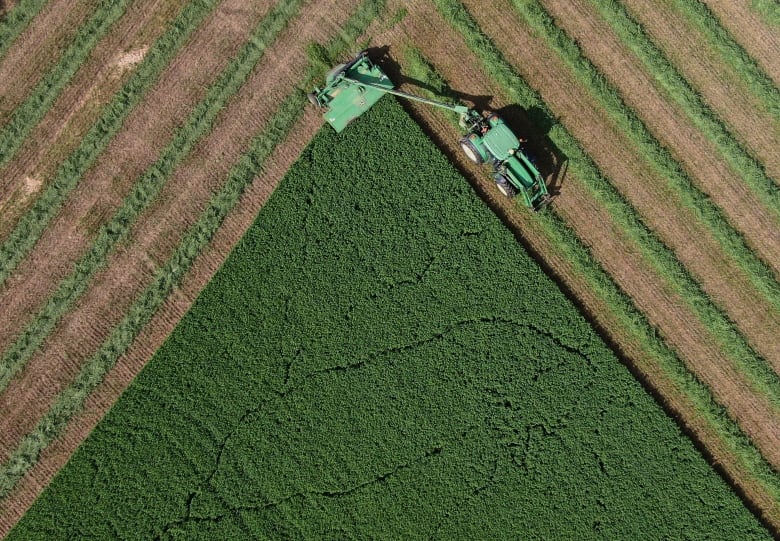 “Two years and two months ago, our grocery store shelves came very close to running empty, and some actually did at the beginning of it,” he said. “We import a lot of food from other countries, primarily the country to the south of us. And when that border closes and food doesn’t cross, we’re in trouble because we’re not self-sufficient in terms of food production .

The effects of a warming climate on crops are uneven. On the northern fringe of a crop’s range, it can actually increase yields.

“We’re not sure how climate change is going to pan out. There are lots of different models, but it certainly looks like where food is produced is going to be possibly changed,” said Clarence Swanton, a member of the Expert Panel on Plant Health Risks in Canada assembled by the Canadian Council of Academies. “To what extent, it’s not clear yet.”

Some parts of the world face prospects much worse than those confronting cooler, temperate countries like Canada. India, for example, is likely to see significant drops in food production.

“I like to think of climate change as a thermodynamic equation,” Swanton said. “You now have excess energy in the environment. And how is that energy going to be dissipated?”

Swanton said that practices like maintaining cover crops at all times and preserving trees as windbreaks can protect crops and soil from damage and erosion. But those measures sometimes involve tradeoffs that take acreage out of production temporarily or permanently.

Gardens of the north

“People erroneously think, ‘Well, as it gets warmer we can move production further north,'” said Swanton. “Well, further north means rocks. It means Cambrian Shield. So where do you get the topsoil to produce? Do we have that much available land?”

Robertson, a midwesterner based in Urbana, Illinois, said his climate modeling has led him to imagine a future of “giant raised beds” on the Canadian Shield, where today the ground is “a big chunk of granite with an inch and a half of pine needles on it.”

“I’m from Illinois and we’re thinking that in the future we’re going to turn into Texas. We have all this wonderful soil and so the thought has crossed my mind that it might be worthwhile at some point in the future to get this delicious soil out of Illinois, scrape it up into train cars and carry it north to spread it out on the ground in northern Ontario or Quebec.

“Would that ever be worth it? In the far distant future, if things turn out to be bad, it might be.” 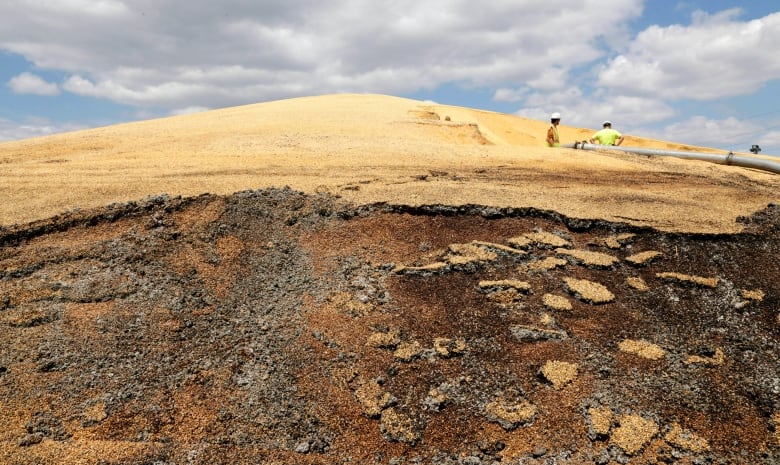 Workers stand atop a mountain of flood-damaged corn seed at the Bartlett grain elevator in Iowa in May, 2019. Climate change is expected to reduce yields in the US corn-growing belt. (Nati Harnik/Associated Press)

Robertson said the scale of the problem within North America is “not world-ending” on a 30 to 40 year timeline — but “you’re going to see lower productivity for the major staple crops.”

“You’d probably be looking in the US corn belt at yields lowered by about 5 per cent, all other things being equal,” he said, describing a scenario where average temperatures rise two degrees above pre-industrial norms (we are currently 1.1 degrees above).

“There’s going to be an overall depression of yields, pretty much everything is worse off, except winter wheat, winter barley and maybe canola.”

Alongside climate change, said Swanton, “the second threat that stands out very clearly to me is the rate at which pests are evolving resistance to the chemistries that we use to protect the health of plants.

“We’ve had a rapid increase in weeds that are tolerant to a lot of our herbicides, as well as insects and diseases tolerant to our fungicides and insecticides.”

The accelerating movement of invasive species around the world compounds that problem, he said.

Glyphosate-resistant weeds such as waterhemp and fleabane have expanded dramatically in Canada in the last decade. Waterhemp, which reached Ontario in the early 2000s and Quebec in 2017, has developed resistance to several different families of herbicides and has shown a remarkable ability to pop up in new locations, spreading 700 kilometers in six growing seasons. 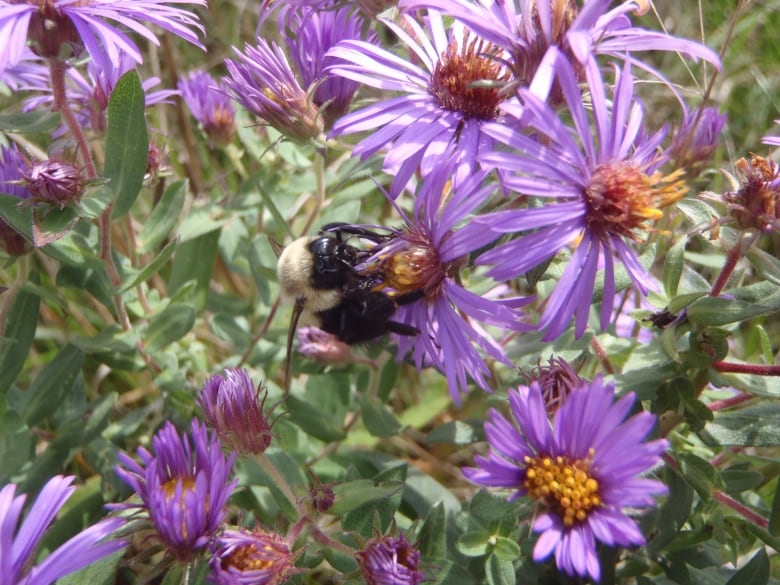 And while some species spread, others declined. Most alarming is the decline in pollinators, a threat to crops ranging from carrots to alfalfa.

Five years ago, UK Environment Secretary Michael Gove warned that parts of the British countryside were three or four decades away from “the fundamental eradication of soil fertility.”

“Countries can withstand coups d’état, wars and conflict, even leaving the EU, but no country can withstand the loss of its soil and fertility,” he said.

“If you have heavy machines churning the soil and impacting it, if you drench it in chemicals that improve yields but in the long term undercut the future fertility of that soil, you can increase yields year on year but ultimately you really are cutting the ground away from beneath your own feet. Farmers know that.”

While Canada’s soil is in better shape than Britain’s, Reusser said farmers here also have realized that they can’t continue to wring the biggest possible returns from the earth indefinitely.

“We as farmers have come to the conclusion that if we are going to grow crops in the long term, not only ourselves but our children and our grandchildren and so on, we’re going to have to look after the soil better than we have in the past,” he said.

“And I think we’ve shown in the past decade or so that we can do that. We’ve adopted practices like growing new crops without the use of primary tillage, so we don’t disturb the soil nearly as much as we used And as a consequence, it doesn’t run off as much when it rains and we retain that fertility. We’re learning slowly but steadily on how to look after our soil and make sure that it retains its capacity to produce food. “

“When I started farming,” said Reusser, “my average yield of corn was about 100 bushels per acre. Today, it’s double that. That’s an astounding increase in productivity and that’s kind of across the board in agriculture.”

Farmers and scientists have in the past shown a remarkable ability to adapt and expand the food supply. The post-war “Green Revolution” enabled billions of people to survive who would have starved without its innovations.

“Back in the 1960s and 70s,” said Robertson, “we were all very concerned that lots of people were going to starve, so we worked very hard to make sure that we could grow more food, and we made a lot of progress in reducing world hunger. But if you throw climate change on top of that, you really undo a lot of progress that’s been made.” Plastic pollution and other forms of oceanic environmental damage could put more of a burden on arable land. (Submitted by Shane Gross)

Today, food from the land is supplemented for many by food from the sea. But climate change, overfishing, plastic pollution and acidification likely will mean the land will have to carry an even heavier burden in the future, as oceans become less giving.

Reusser said he hopes the revolution can continue. “I still think there’s potential. As time goes on, we kind of push that boundary forward, not really knowing what we can do in the future to produce more food, more efficiently and more cheaply.”

“I think we’re still going to continue to make some gains,” said Swanton. Today’s corn, for example, is much more stress-tolerant than the corn of the 1960s, and science continues to push tolerance to threats such as drought and lower nitrogen levels.

But can scientific advances stay ahead of the gathering threats?

“You wonder about that at this point,” said Swanton.