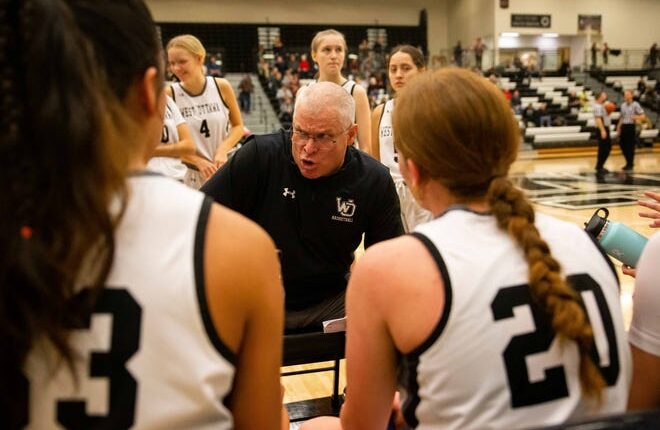 PARK TWP. – After a stunning loss to Caledonia on Tuesday, the West Ottawa girls basketball team had a daunting task ahead of them.

After their first loss, the No. 12 Panthers would face No. 5 Rockford just two days later.

How would they respond?

The Panthers played perhaps their best game of the season, but it wasn’t quite enough in a 61-47 loss to Rockford, which pulled away late with some open 3s, making four of their 12 3s in the fourth.

It wasn’t the ultimate result they were after, but the Panthers know that they way they played can only help them moving forward.

“We played our hearts out today,” West Ottawa guard Gabby Reynolds said. “Moving forward, this was really good. Energy was good. Chemistry was good. Moving forward, we showed we learned from Caledonia and we proved we can be a threat the rest of the season.”

“We didn’t have energy Tuesday. We were a little overconfident, too, and expecting Rockford to be our biggest challenge, and we underestimated Caledonia,” West Ottawa’s Chelsea Overbeek said. “Even though we didn’t win, this was good for us as a team to know we could stay with them. That was big. It was confidence-boosting, especially knowing we play everyone in conference again.”

It was a much different performance than Tuesday’s loss to Caledonia.

“We were ahead at halftime and ahead in the third quarter. We played really well. Our work ethic was strong as a team. We did not play well as a team on Tuesday and we deserved to lose that one,” West Ottawa coach Paul Chapman said. “They wore us down a bit at the end. Our focus was on points and our mental discipline was really good. We had to withstand their runs. Gabby (Reynolds) and Chelsea (Overbeek) were really special tonight.”

Reynolds finished with a game-high 28 points and Overbeek added 17.

“Gabby is one of the most improved players we have seen all year. We can put 1-2-3 girls on her and she still finds ways to make plays. Overbeek changes things. We have our best defender on Gabby and she runs into four players, but if you have someone shooting well, it opens up things in the gap. That made it a lot harder on us for sure,” Rockford coach Brad Wilson said. “It came down to our toughness inside and not giving them second chances. I am proud of the way we played.”

Subscribe:Get the latest local sports with this offer

Addy Scholten put the Panthers back in front 28-25 at halftime. with a transition layup.

“In my time here, we have never been this close to Rockford. We certainly have never been winning at the half,” Reynolds said. “This is really motivational for our team. This is almost a win for us. We have to keep playing just like this.”

Overbeek ended the run with a 3. Another by Overbeek pulled the Panthers within 36-34 with 3:18 to go in the third. Another Rockford 3 made it 43-27 Rams after three quarters.

In the fourth, Anna Wypych made two 3s and pushed the Rockford lead to 49-37.

“They move the ball well and it is hard to keep up with them,” Reynolds said. “They have really good shooters. We did well getting to the ball, but they hit the shots. We just have to limit their possessions and slow them down.”

Reynolds hit a 3, but Wypych answered with another one.

Overbeek fouled out and the Rams made a couple of more shots to hang on for the victory.

“We have a hard time guarding them man-to-man, so we knew we would have to give up some things,” Chapman said. “They are a quality team. We are pleased with some of the things we did, but we aren’t satisfied. We have to build on this great effort.”