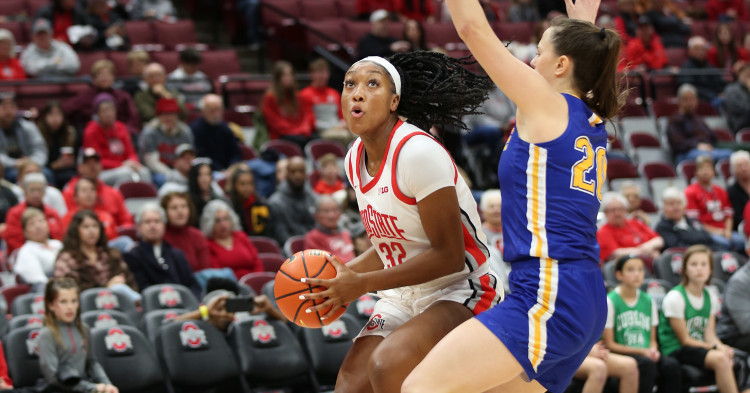 The Ohio State Buckeyes women’s basketball team won Sunday’s game against McNeese State in a staggering 99-43 score line. It was one of those non-conference games where one team benefits from extra practice and another team gets to play against a Power Five school, and give their team an experience and likely get the school compensation.

Even though the game wasn’t putting anyone on the edge of their seat, competitively, and it won’t be remembered much as the conference season approaches, there are items to take away.

Every game this year brings a new career high for sophomore forward Taylor Thierry. Sunday was no different, with Thierry scoring 15 points, five more than her previous high of 10. Thierry scored those points inside and from deep, hitting the lone three she attempted on the day.

The forward also grabbed five rebounds (three on offense) and two steals and assists. Even if performances, statistically, carry a little less weight against McNeese than against a ranked team, or Big Ten side, it still shows the increasing confidence that Land-Grant Holy Land wrote about leading into the game.

Freshman forward Cotie McMahon had an impressive game that didn’t show up on the stat sheet. McMahon was 1-for-4 from the field but where she came up big was in the backcourt.

Although McMahon was picked up three steals, if pressing players into turnovers was a statistic she’d lead the Buckeyes by a mile. McMahon was in the face of McNeese State players and causing issues in passing, as evidenced by the highlight below where guard Jacy Sheldon technically gets the steal but it was McMahon who made the poor pass possible.

The Buckeyes were diverse in their three-point shooting, Sunday. Six players hit at least one with guard trio Taylor Mikesell, Madison Greene, and Rikki Harris each hitting multiple from deep. Ohio State won all offensive stat battles except one: three-point percentage.

McNeese State, led by the game’s top scorer Kaili Chamberlin’s 4-for-6 from deep, hit 8-for-18 from beyond the arc. Maybe it’s a lack of motivation being up so big or maybe it’s an area to watch as the season progresses, but the Buckeyes didn’t do well closing down shooters deep, with many shots going in without a hand in the shooter’s face.

No Ohio State starters played 20 minutes, allowing minute mules like Sheldon and Mikesell time off the court. Instead, head coach Kevin McGuff increased minutes for two players who missed most or all of last season in forward Eboni Walker and guard Madison Greene.

Greene led the Buckeyes playing 26 minutes, and Walker was not too far behind playing just under 22. Both made an impact, with Greene scoring eight points on top of six assists and four steals, including one that made Mikesell turn back and laugh before going on one of many fast breaks in the day.

Walker, whose integration into the Buckeyes roster is key for the team who needs depth in the paint, had seven points, six rebounds, and three steals. Points-wise, Walker had ample chances but her shot was a bit off, likely from lack of time on the court with competitive minutes. Walker did play strong in the paint and showed an ability to battle for rebounds and find teammates under the basket.

Another player getting deserved minutes on Sunday was guard Hevynne Bristow. The junior, who spent most of last year on the bench due to injury, had eight rebounds and seven points. Also, her two assists were better suited for a highlight reel than in writing.

Bristow won the team’s “dub chain” after the game. After winning the honor, Bristow spoke with the media and shared how it felt.

“I admit it, I cried a little,” said Bristow. “Last year, I was hurt all season, so it just meant a lot that my work paid off and my teammates trusted me and my coach trusted me.”

Against the Ohio Bobcats, Thursday, freshman guard Kaia Henderson grabbed a steal and ran the court for a layup, getting fouled in the process. Sunday, the same thing happened to fellow freshman guard Mya Perry.

The 2022 Ohio girls high school champion out of Reynoldsburg, Ohio basically recreated Henderson’s first NCAA points for her first. After receiving the Buckeyes’ defensive pressure and forcing a bad pass, Perry fought for possession and ran down the court for a layup. Although Perry missed the free throw, it was a momentous occasion for the promising freshman guard.

Sympathy for the Cowgirls isn’t because of the final score. Both teams likely knew the outcome of this game when it was scheduled, and Ohio State played the team in front of them. No harm, no foul.

Feelings of sadness towards McNeese State is how they traveled to the game. After losing to the Buckeyes on Sunday, Bradley University on Saturday, in Peoria, Illinois, and a 100-38 defeat at the hands of the Fighting Illini on Wednesday, Nov. 16, the Cowgirls didn’t load into their bus to go home .

Instead, the team loaded into three mini-vans and an SUV for the 1088-mile trip back to Lake Charles, Louisiana.

Could they be driving to an airport? Maybe the rental car company gave four vehicles with Louisiana license plates? That’s a heck of a coincidence.

McNeese State doesn’t have the budget of an Ohio State, not many schools do, but cramming a basketball team into minivans isn’t a way to treat a student-athlete. If playing games against Power Five schools every year is the means to more money for the program, then at least give the athletes a better arrangement where they could possibly stretch their legs and do school work comfortably.