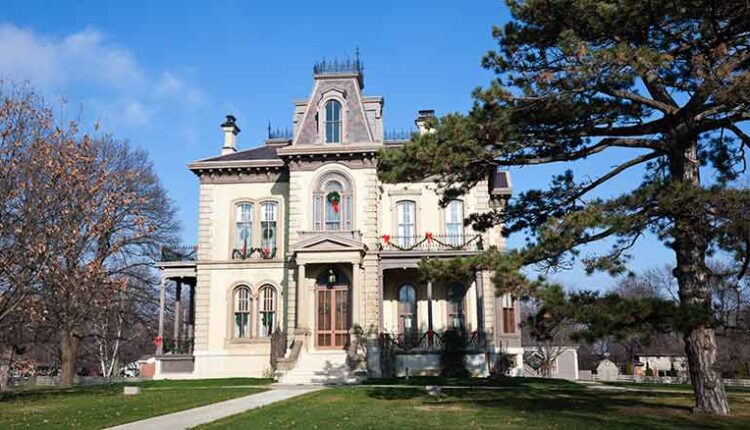 Set in the heart of Illinois, Bloomington is a welcoming community to escape from the hustle and bustle of big city Illinois life. There are a plethora of things to do in Bloomington to keep you, and the family entertained.

Highlights include the McLean County Museum of History, Miller Park Zoo, and the Bloomington Center for the Performing Arts. Here’s the ultimate list of the top 20 things to do in Bloomington, Illinois.

20 Things To Do In Bloomington

One of the things to do in Bloomington il is to take a tour of David Davis Mansion.

David Davis Mansion is one of the most notable historic buildings in Bloomington and a State Historic Site.

This Victorian-style mansion covers three stories and was built in the early 1870’s.

The house became famous because it once belonged to Abraham Lincoln’s close friend David Davis, a U.S. Senator and a Supreme Court Judge.

You can head to this historic mansion between Wednesday and Sunday.

On tour, you can see 35 rooms filled with decorative art and beautiful antiques.

The house is also surrounded by Sarah’s Garden, which is well worth a visit.

If you are visiting Bloomington with your family, you can’t miss Grady’s Family Fun Park.

This fun park is jam-packed with entertaining activities for all ages, even adults.

There are several kiddie rides for those who are younger (or shorter), including a super fun slide, a Ferris wheel, and a dragon wagon. Looking for things to do in Bloomington il? Here are 20 fun ways to spend your time.

The Constitution Trail connects Bloomington and the neighbouring town of Normal.

It’s a great place to head to if you want to spend some time outdoors running, walking or strolling.

The Constitution Trail is an excellent place to go, and with more than 50 miles of trails, there is plenty of room to stretch your legs.

You can discover 32 trails, which are also partly linked to the Route 66 Trail.

The Ewing Manor Cultural Center is on a 6.5-acre estate, home to a historic manor, open-air theatre and immaculately kept gardens.

The manor hosts the Illinois Shakespeare Festival, another of the best things to do in Bloomington.

Tour the grounds of this Victorian-style manor house and pretend you’re in an episode of Downton Abbey or Bridgerton.

You’ll feel you’ve been transported to rural England and will be surprised to discover that the manor was only built between 1928 and 1929.

The Children’s Discovery Museum is in the small town of Normal, which is adjacent to Bloomington and only a short car ride away.

This museum has one central mission, to provide stimulating learning through play.

There are three floors of exhibits to venture through and explore.

Be prepared to spend at least an hour per floor as there are many things to do.

There is something for every child’s interest inside. Budding doctors, musicians, scientists, and authors will find something they love.

The recommended age range for this discovery centre is between 2 and 12. The kids won’t stop talking about this Bloomington activity.

Calling all aviation lovers, this Bloomington attraction will be up your street.

The Prairie Aviation Museum displays restored military and civilian aircraft and plenty of them.

Wander around the museum and you are bound to learn something new.

There are a bunch of interactive exhibits inside and an exciting pilot simulator.

There are eight aircraft on display and three helicopters.

Check whether the day you are going is “Open Cockpit Day” as this is an excellent experience for kids or any aviation fan.

You can see right inside a military jet.

Take note that this aviation museum is closed between January and February. Playing golf is one of the things to do in Bloomington Illinois.

Whether you are an old hand at golf or want to try it for the first time, visit the Prairie Vista Golf Course.

This is a seriously nice golf course, which is immaculately maintained in a beautiful setting.

As well as an 18-hole course, there is a large putting green, a driving range, and a practice chipping green to brush up on all those golf skills while on vacation in Bloomington.

What’s better is that Prairie Vista offers a kids-play-free event every day after 2 pm. It’s a fun free activity to get the kids interested in a new sport.

If you want to try some fun sports whilst in Bloomington, head to the ice centre.

At the Bloomington Ice Center, there are a variety of activities to try, including open skating, hockey, figure skating, broomball, and curling. The Bloomington Farmers’ Market happens each Saturday at Museum Square and is seasonal, so it’s only operational between May and October.

This farmers market isn’t just about the produce, it’s also about the community feel and atmosphere.

The introduction of live music makes it a great atmosphere and the perfect start to any Saturday. Another fun thing to do in Bloomington il is to visit the zoo.

If you are travelling to Bloomington with kids, be sure to take them to Miller Park Zoo.

Animals you can expect to see include snakes, seals, tortoises, cockatoos and the red wolf.

With your entry ticket, you can go to a free animal feeding, and for the little ones, there is also a Junior Zookeeping program.

If you want a unique experience, groups can book in for a ‘Night at the Zoo’ experience. One of the fun things to do in Bloomington Illinois is to visit the McLean County Museum of History, which is in the old courthouse.

Visiting the McLean County Museum of History is one of the best things to do in Bloomington.

The museum sits inside a beautiful 20th-century courthouse.

Inside the museum are a bunch of rotating galleries and permanent exhibits with over 20,000 historical items on display, including local and national rare books and historical paperwork.

If you want to learn more about Abraham Lincoln’s time in Bloomington, check out this museum.

If you want to learn about the American Renaissance, a permanent exhibit showcases the history of the Old Courthouse in which the museum is situated. You can never have enough markets, right? As well as the weekly Bloomington farmers market, there’s also the 3rd Sunday Market.

This market has been running since 1988.

It’s a half inside half outside market with more than 450 dealers from 17 states. So, you will likely find something that interests you.

There is literally everything, including antique furniture, folk art, vintage clothes, sports memorabilia and collectables.

You name it they’ve got it.

Just be prepared to search for your hidden treasures. But isn’t searching for gems the best part of a market?

The market is held between May and October and is popular among many Midwestern collectors and antique enthusiasts.

Don’t be surprised to find this place busy, as thousands of people flock to the market for the best bargains.

If you are looking for an excellent park to relax in, visit Tipton, a 50-acre park and lovely outdoor space with plenty of activities to keep the whole family entertained.

There are basketball courts, a football field and a softball diamond, a tranquil nature area and a fishing lake.

Walking trails wind throughout the park, perfect for taking a stroll.

For the kids, there’s a brilliant playground and a water play area, ideal for splashing around in during summer. Who doesn’t love a bit of Shakespeare?

The Illinois Shakespeare Festival first started in 1978, and you’ll be able to catch it at the Ewing Theatre in Bloomington.

This festival begins from June to mid-August.

You can expect to see all the classic Shakespeare plays performed to impeccable standards.

Watch a play or two and fully immerse yourself in 17th-century English literature.

The grounds of the Ewing Manor provide an authentic setting for Shakespeare readings.

This is another of Bloomington’s good free parks if you are looking for some outdoor space to enjoy.

Walter Bittner was the former Mayor of Bloomington and advocated strongly for parks and recreational facilities.

Inside the park is a jungle gym for kids, a small basketball court and gazebos, which are often used for family picnics and celebrations.

If you like nuts, don’t miss a trip to Beer Nuts, which started out as a confectionary shop in the 1930s and soon developed its signature beer nuts.

These redskin nuts are known as a go-to snack in Bloomington and nationwide.

Despite the name, these nuts don’t have any beer in them, so anyone can give them a try.

Check out Beer Nuts via a tour and sample some of the company’s related snacks, such as chocolate-covered nuts, glazed peanuts, almonds and cashews.

Visiting a cemetery whilst on vacation doesn’t sound enticing, but there are some interesting things to see in the Evergreen Memorial Cemetery.

The grave of Dorothy Gage, the name of the character from L. Frank Baum’s The Wonderful Wizard of Oz is in Evergreen Cemetery.

There is a tree carving of Dorothy, Toto, and the Yellow Brick Road near the grave as well.

Wander along the lines of old headstones, pay your respects to some of the service men and women, and see if you can spot any more famous names.

Head around the corner from the McLean County Museum of History and you’ll find The Castle Theatre.

For evening entertainment, check out what’s on stage as the theatre hosts a variety of local and newly emerging national musicians.

There is something for every music taste, from indie rock to classic country music.

A number of stand-up comedy acts also perform at the theatre.

19- Bloomington Center for the Performing Arts The Bloomington Center for the Performing Arts (BCPA) is a cultural hub in Bloomington’s downtown area.

This performing arts space has been a space for local artists and award-winning nationally acclaimed performances.

Bloomington Center for the Performing Arts is at 600 N East St, Bloomington, IL 61701.

There is a lot of fun to be had at the Iron Coyote Challenge Park, an adventure park offering 20,000 sq ft of space for climbing and challenging yourself.

It is a combination of fun and fitness.

There are high ropes, climbing walls, and a 60 ft zip line.

Wind your way through obstacle courses or try your hand at the American Ninja Warrior course.

This is a great family vacation activity as there is something for everyone.

If you are travelling to Bloomington with work colleagues, why not have a team-building day at Iron Coyote Challenge Park?

There will be sweat, laughter, and a lot of fun!

ON USING THE NAME OF GOD