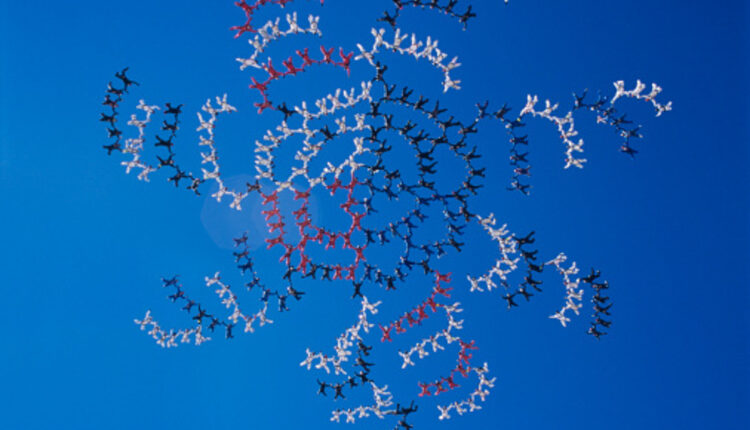 As of this writing (Thursday morning, 9:30), two hundred skydivers are still trying to set the World’s Largest Vertical Formation record at Skydive Chicago that they began trying to set earlier in the week. Considering what they’re attempting, I can understand why it hasn’t happened yet.

It may be because it’s never been done before with this many people. The largest successful attempt was back in 2015, and that was with 164 skydivers taking part, while the current group is shooting for 200 skydivers in total.

As of last night, there have been 12 attempts this week, but no world record yet.

…to this, only with a lot more people. (Getty Images)

Which, according to SkyDiveChicago.com, is a single-point skydive:

All jumpers will exit their planes and fly together to create one big formation. This world record attempt will utilize 10 aircraft, flying to 19,000 feet, at an altitude so high the FAA requires on-board supplemental oxygen. To break the record, all 200 jumpers must carefully lock arms in a pre-assigned, intricate pattern (with no errors) before separating and filling the sky with 200 parachutes.

This is a jump with 82 skydivers. (Getty Images)

Looks like we’ve got some premature chute-opening. (Getty Images)

Back In 1998, Sky Dive Chicago Managed To Link 246 Skydivers, But That Was A Bit Different Than The Current Record Attempt

The difference between these two dives is substantial. The orientation of the 1998 dive was the traditional belly-to-earth style at approximately 120 mph. This record poses a significant challenge in that the skydiver’s orientation is head down at speeds of approximately 180 mph.

As someone who has a substantial fear of heights, I’m going to go ahead and quote this guy:

A recent survey says Illinois is one of the most fun states in the US. Truth is that Chicago is the biggest reason, but there’s so much more than the Windy City.