A History of Houston’s Creative Terrain 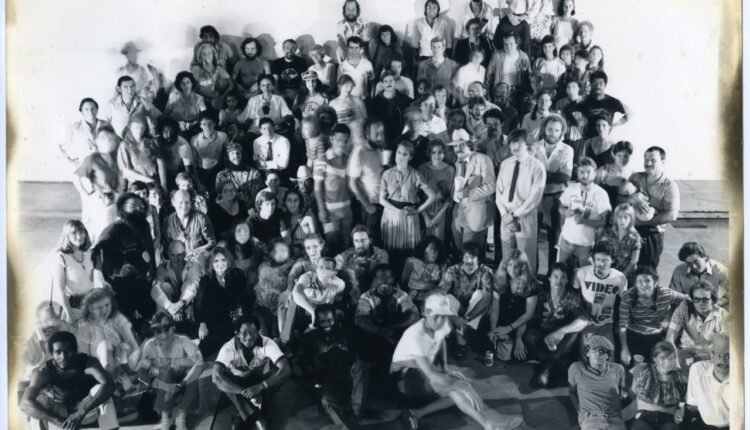 HOUSTON — Every generation tells the next one their city’s art scene used to be great. But how would anyone judge this kind of decline when art spaces, especially artist-run spaces, are often ephemeral? Artist-run projects, which typically operate independently from the market-based demands of the gallery or museum, are born out of a need for space, both physical and psychological. They have been the place for American artists to build creative concepts and communities for over 70 years. So why do we know so little about these landmarks?

“They are not well-documented internally unless someone is a photographer or pack rat,” author Pete Gershon told Hyperallergic. “Things grow or fizzle out and it’s not history for 10 or 20 years. Those are the pitfalls.” Gershon’s new book Impractical Spaces: Houston (Impractical Spaces, 2022) resurrects the stories of the city’s artist-run venues since 1947.

The book was born when Gershon responded to a post on Glasstire calling for partners with Impractical Spaces, a collaborative national project producing an anthology of defunct and active artist-run spaces in the United States. Impractical Spaces started as a blog post in 2016 when Michael Anthony Farley penned a call for submissions on Art F City titled, We’re So Not Getting The Security Deposit Back: A Guide to Defunct Artists Spaces. When over 100 artists responded, Art F City’s Executive Director Paddy Johnson connected with Washington, DC’s Beltway Public Works to produce the pilot publication. In 2018, Johnson attended a symposium in Champaign, Illinois, run by artists Dulcee Boehm and Cory Imig, and the three have been working on the anthology ever since.

As the author of Collision: The Contemporary Art Scene in Houston 1972-1985 (Texas A&M University Press, 2018) and Painting the Town Orange: The Stories of Houston’s Visionary Art Environments (History Press, 2014), Gershon was familiar with the creative terrain of the city, but he assumed stories lingered that he didn’t know . He crowdsourced on Facebook and ran down any tips, casting a wide net. About 75 artist-run spaces responded to a questionnaire, which Gershon narrowed to 55 by cutting commercial galleries or places that were a bar or restaurant. “notsuoH is a bar with music, [and in the book] but notsuoH is different. It’s a blurry line.” Robust venues like DiverseWorks and Project Row Houses are also included because they started as artist-run spaces and grew into something else. “[Artist-run spaces] can curve into a mature organization with broader concerns,” he said. Gershon is still fielding submissions despite the book’s completion. “I’m not the deadline police. I’m happy to collect these stories as they come. I’ll find a place to put them eventually.” The resulting text is a community-authored book of first-hand testimonials. “I’m just the organizer,” Gerhorn proclaims.

Each venue is introduced to readers with its locations(s), years of operation, and founders’ names. The question-response presentation may be formulaic, but it reveals encourage triumphs and the immense risks artists take to carve a place for themselves and others. Like Consolidated Arts Warehouse, which hosted important bands such as the Dead Kennedys and the Natives, but one of the founders took off with all the money; or Jack and Stephanie Stenner, who depleted their savings and the $35,000 borrowed from Stephanie’s mother to successfully develop studio and exhibition spaces from the Purse Building that had no electricity or plumbing.

“I didn’t tell anyone [before the opening] because I didn’t want anyone to tell me how I couldn’t do it,” poet and painter Vivan Ayers-Allen remarked about Adept New American Folk Center in a 1973 interview with the Lubbock Avalanche-Journal. The Center was Ayers-Allen’s response to the Houston gallery system shutting out Black artists. From 1970 to 1980, she showed many artists such as Dr. John T Biggers and Jesse Lott, and several themed exhibitions on Black American art. Her efforts stretched to education programs for at-risk youth called “Workshops in Open Fields.” Today, Ayers-Allen is 99-years-old and lives in Mt. Vernon, New York. She could not be reached for the book, so the Adept New American Folk Center is one of ten stories Gershon deemed critical to Houston’s art history and included it despite the absence of a founder’s voice.

Houston has no zoning to address land use, which means anything can be torn down and replaced by anything else. “Affluence and disparity live right around the corner from each other,” Gershon writes in the book. Historical protections exist, but the prevalent attitude is uniquely Texan: no one tells me what to do with my property. “It’s why we have the Beer Can House or the Orange Show,” explains Gershon. Since the city responds to most complaints with a shoulder shrug, he continues, “You can get away with a lot. The city of possibility.” With many existing books on alternative art spaces focused on New York, Houston exemplifies the urgency to look beyond the Hudson River. New York is New York and it is not like Kansas City, Portland, or Houston.

When painter Emma Richardson Cherry founded the Art League in 1900, her humble aim was to procure art reproductions for schoolrooms to enrich children’s lives. That seemingly small contribution evolved into the Museum of Fine Arts, Houston. Impractical Spaces: Houston saves stories from obscurity and records the diverse expressions and capacities of artists to build worlds, both fleeting and significant, in the gaps of municipal initiatives and museum programming. “That is what these small spaces are good at and what big spaces want to access — that magical engagement with community,” Gershon argues. “Art and life merge in artist-run spaces.”

Elly Hanauer-Friedman was elected to the Champaign County Board in District 4 : SPlog : Smile Politely