A tight knit brotherhood of ‘freaks’ 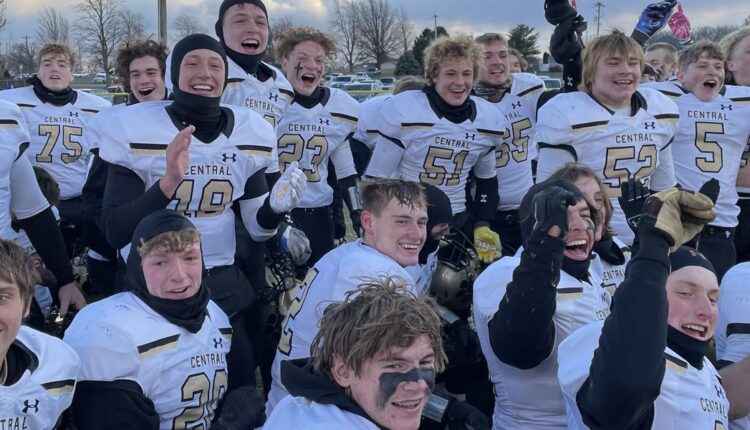 QUINCY (WGEM) – How to describe the Panthers of Camp Point Central? They like to be called freaks

They are old school. They are buttoned up. They are like a family decked out in black and gold. They are undefeated.

Come Friday, the (13-0) Panthers will take the field of Memorial Stadium in the heart of the University of Illinois. You can watch that game at 10 am on WGEM CW 10.2.

Their final test: The Class 1A State Championship vs the (13-0) Lena-Winslow Panthers. A program that has won five of the last 11 State titles.

They have Power 5 recruits and an explosive offense that has outscored opponents 670-152 this season.

Let me introduce you to a team that has… five different players running the football weekly. It’s a track team with shoulder pads.

(SR) Isaac Genenbacher has been the leader of this onslaught of backfield speedsters. Genenbacher is fast, elusive, and also a pain to bring down. If you need 4 yards on 3rd down. He will get you 6 to 7. He scored two of the six touchdowns vs Ridgeview-Lexington in last Saturday’s State Semifinal.

(SR) Ross Riley. You better wrap this guy up or he will either bounce off you or drag your defenders for a huge gain. Riley had three scores and a 22-yard run where he took 4-5 defenders along for the ride vs the Mustangs.

(JR) Drew Paben. I would get used to hearing this kid’s name. He has had a terrific postseason. He has the ability to turn a game around. Paben had a 43-yard touchdown against Greenfield/Northwestern that accomplished a 24-point comeback for CPC in the Class 1A State Quarterfinal.

(SR) Gavin Graves. Graves is a silent but effective runner. He is capable of turning a short gain into a long-distance race to the end zone.

(JR) Conner Griffin. He is unafraid of punching it right up the A or B gap.

(JR) QB Nick Moore. Last year, this kid was an under-the-radar standout. The Panthers are about running the ball and playing good defense. However, if you see him set up and throw it downfield, that means miscommunication happened in the secondary.

The junior threw a 20-yard touchdown pass to Genenbacher on 4th down vs Greenfield/NW last Saturday. While he did not throw the ball much, he was effective. Including a 43-yard bomb to Genenbacher across the right sideline and also keeping an eye on his two tight ends, Carter Eyler and Josh Alford.

Their defense is the most underrated part of their game. It is not about building stats; it is about coming up in the clutch and frustrating opposing play callers. Camp Point Central in 13 games gave up a grand total of 68 points. 7 of their contests were shutouts.

They have players who are able to change the tone of a game including a few young standouts (JR) Darren Rigg, (SO) Elijah Genenbacher, and (FR) Kadin Niekamp. Whether it’s a huge stop on the 4th down or punching the ball out and leaving their opponent with no points on the drive.

Finally. it would be an insult if I didn’t mention head coach Brad Dixon. The last time he coached a team to the state championship was in 2018.

WGEM Sports interviewed him before the season. He’s a no-nonsense coach who wears a ball cap, sunglasses and every game day, regardless of the temperature, he wears shorts. 35 mph winds and temperature in the 20’s, it does not matter to him.

They aren’t a headline. It is a team whose play on the field dictates a headline the next day.

This undefeated matchup on Friday will be the best way to open up a two-day marathon of IHSA State Championship football in Champaign, Illinois. It’s a game only a freak would love to play in.