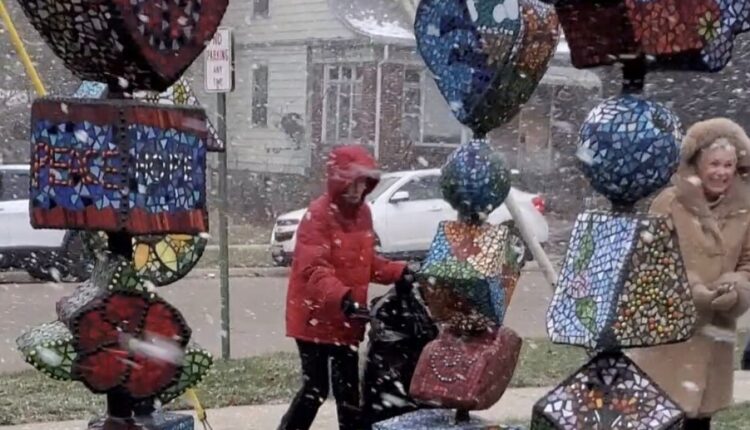 A Rockford neighborhood has something that you won’t find in most residential areas thanks to an art initiative. An unveiling took place November 17.

Five colorful mosaic structures sit at the intersection of Haskell and Fisher Avenue. Each one has a message at the bottom. One said “Peace and Hope for Ukraine,” another “Love Our Mother Earth.” The sculptures were created by participants of the Rockford Area Arts Council SPARK! Mosaic Summer Program. This is the third year for the Art for Impact and Neighborhood Improvement Initiative.

Susan Burton is a mosaic artist from Marseilles, Illinois. Burton, who led the project with the help of artist Cristi Hopp Kniess, worked with Womanspace and the Arts Council two years ago on the Women’s Suffrage Centennial sculpture located at Rockford’s Women’s Suffrage Plaza.

“When that was over- that was a two-and-a-half-year project- it was like we wanted to continue our relationships together and create more,” Burton said.

Liz Hiemstra is the marketing coordinator at Womanspace. She explained how the organization helped with the completion of the recent project.

Mary McNamara Bernsten and Liz Hiemstra taking the bags off of the structures.

“Basically, we turned our grounds into a workshop so the kids would have a space outdoors to kind of make a little mess and make a little art.”

Elaine Hirschenberger is the founder and executive director of Womanspace. She said the community was enthusiastic after the first installation that was done for the women’s suffrage sculpture and the partners wanted to keep the momentum going.

“And so for the last two summers we’ve really been able to maximize that,” she said. “And we’ve taught the kids of Rockford how to create sculptures. And they have immersed themselves in it so beautifully.”

“We chose this neighborhood as part of our Neighborhood Improvement Initiative,” he explained. “Because we focused on six neighborhoods in the city of Rockford that were experiencing high rates of violent crime. And so, what we did is we came in and cleaned up the neighborhood, beautified it, and we told them we would be back.”

McNamara said he thinks the display will bring hope and optimism to the neighborhood’s residents.

Hirschenberger said the pop of color that the art provides is a source of pride for the community.

“And you could identify a neighborhood by like, here’s the Coronado Haskell neighborhood and it’s the site of the five totems. And that is very exciting,” she said.

Middle and high school students helped create the sculptures. Burton said this project made a great impact on them.

A tight knit brotherhood of ‘freaks’