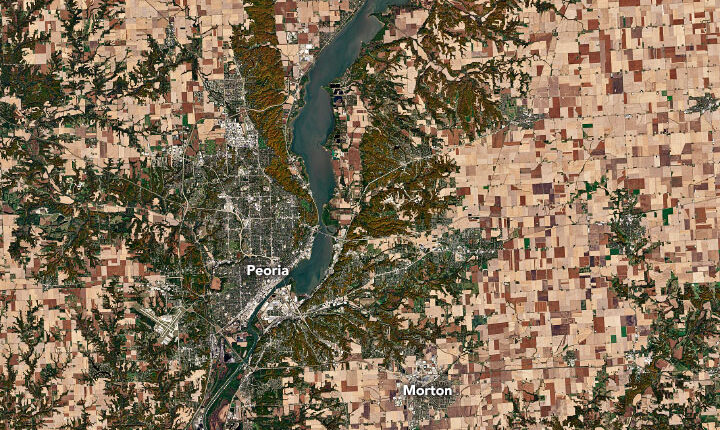 Pumpkins, a type of winter squash native to the southwestern United States and northern Mexico, are among the oldest domesticated plants. Archaeological evidence indicates that several different species of pumpkins were independently domesticated between 4,000 and 10,000 years ago in different parts of North, Central, and South America.

Modern-day pumpkins are quite a bit different than their wild forerunners, which were small, bitter, gourd-like, and mainly eaten by mammoths and mastodons. As humans started to sample and replant the best-tasting of them, modern pumpkins have come to be considerably larger, sweeter, and more palatable.

All fifty US states now raise pumpkins, but Illinois consistently stands out for the total acreage and weight of its harvest. The Operational Land Imager (OLI) on Landsat 8 captured this natural-color image of farmland around Peoria, Illinois—a major hub of pumpkin growing and processing—on October 22, 2022. The soils and climate in this part of central Illinois are ideal for growing pumpkins, and many of the fields surrounding Peoria are used for growing a certain type of canning pumpkin. While the fields were lush and green in September, this image was taken after the harvest, leaving most fields brown.

With 652 million pounds (296 million kilograms) harvested in 2021, Illinois was the top pumpkin-producing state that year, according to US Department of Agriculture data. That amounted to more than a quarter of total US pumpkin production, and more than the next top-five states combined. Unlike other pumpkin-producing states that grow lots of carving and ornamental pumpkins, including Indiana and California, most of the pumpkins grown in Illinois are used for canning and cooking.

The nearby towns of Morton and Princeville also play a role in the region’s pumpkin production. These towns host two of the largest pumpkin processing facilities in the state. Pumpkins are washed, peeled, heated, puréed, and canned in these facilities. Their presence helps explain why Illinois produces more than 90 percent of the processed pumpkins—a common ingredient in Thanksgiving pumpkin pies—sold in the United States.