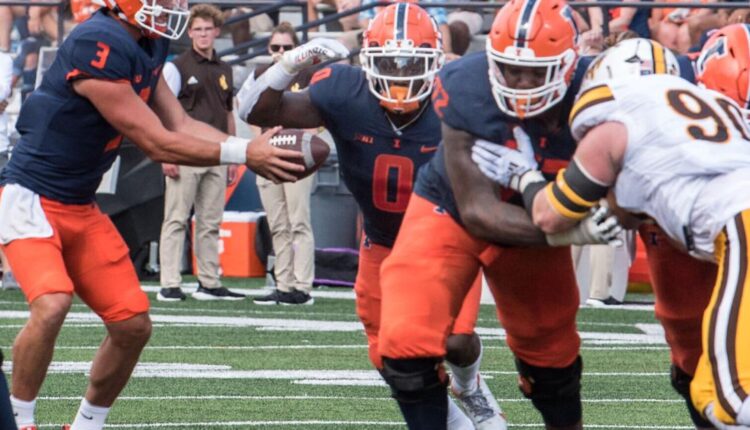 CHAMPAIGN — If you made a bet that Bret Bielema wouldn’t talk about injuries Monday, you would have lost.

Early during his weekly press conference in the Memorial Stadium press box, the second-year Illinois football coach offered an update on sophomore running back Josh McCray. The running back got banged up in the second half of Saturday’s season-opening 38-6 win against Wyoming.

“I know he won’t be with us this week,” Bielema said. “I just don’t know the long-term prognosis to where he’s at.”

McCray appeared to hyperextend his right knee after a carry. He was helped off the field and did not return.

Playing as the prime backup to Chase Brown, McCray finished with eight carries for 33 yards. He also had two catches for seven yards.

The 6-foot-1, 235-pound McCray will be missed by the Illini, no matter how long he is out.

“I will say his spirits were very good (Sunday), but we’re waiting to gather all of the information,” Bielema said. “Josh has been through quite a bit before we ever got eyes on him. His last six months in our program have probably been his best six months. He’s changed his body. He’s leaned up.

“If he’s with us next week, two weeks, three weeks, four weeks, two months from now, whatever it ends up being, I have confidence in what he’ll be. He’s got a lot of bright days ahead of him. We’ve just got to help him get there.”

Climbing the chartsBrown will be the starting tailback against Indiana on Friday. And the rest of the season.

The Canadian had a good afternoon against Wyoming, running for 151 yards and two touchdowns. He also caught three passes for 16 more yards and another score.

The Big Ten recognized Brown’s efforts, naming him the Big Ten’s co-offensive player of the week on Monday along with Northwestern quarterback Ryan Hilinski.

Could be the first of many honors for Brown, who will be a strong All-Big Ten candidate if he keeps playing like he did against the Cowboys.

“Chase just continues to prove to us just how special of a player he is,” Bielema said. “Very talented, but now he understands the offense. Some of the things that he does instinctively have grown even further.”

Brown is looking to become just the third player in Illinois history with more than one 1,000-yard season. Jim Grabowski and Robert Holcombe are the only two other Illini running backs to hit that elusive mark.

For his career, Brown now has 1,714 yards at Illinois, which is 23rd on the program’s list. He just moved past James Coleman and College Football Hall of Famer JC Caroline. Lonnie Perrin (1,771) and Donovonn Young (1,777) are next on the chart.

Fairly obvious to me that opponents should try to stop Brown. Crowd a bunch of guys near the line of scrimmage and force Illinois to throw.

Count on Indiana to try some version of it Friday night in Bloomington. Don’t let the best player beat you. Kind of the football version of baseball teams pitching carefully to Cardinals star Paul Goldschmidt when there are players on base. Let someone else try to be a hero.

If Illinois is able to exploit some of the attention that goes toward Brown, it will be a win-win for the offense. Receiver Isaiah Williams, quarterback Tommy DeVito and friends will have opportunities to make plays. And if it works, Brown will get involved again.

Who’s No. 2?At tailback, it was McCray against Wyoming and it will be someone else Friday in Bloomington. Illinois doesn’t release a depth chart, but word of mouth from the head coach made it clear Monday that the top options after Brown are Chase Hayden and Reggie Love.

They had a combined 10 carries for 74 yards against Wyoming.

One of Bielem’s most vivid memories of Hayden with the Razorbacks was the time the player broke his leg in a game and walked off the field.

“That’s not common,” Bielema said. “He’s got grit, fortitude. I don’t know how intelligent it was, but I don’t think he knew it was broken. I just know there is something in him.”

“Reggie has gone through a couple things off the field here that really define you as a human,” Bielema said.

Love scored on a nifty 33-yard run late in game, continuing the play after landing on a Wyoming defender.

“Reggie’s play there at the end was pretty awesome,” Bielema said. “I had some fun with Reggie at the end of (Sunday’s) meeting if you want to ask him. Reggie is a very well-liked player on the team.”

Bielema wants to have at least three running backs ready for each game.

Freshman Aidan Laughery and sophomore Nick Fadanzo are also in the mix at Indiana after the top three.

But for now, it’ll be on Brown to continue a strong run game for the Illini. And then everyone else.