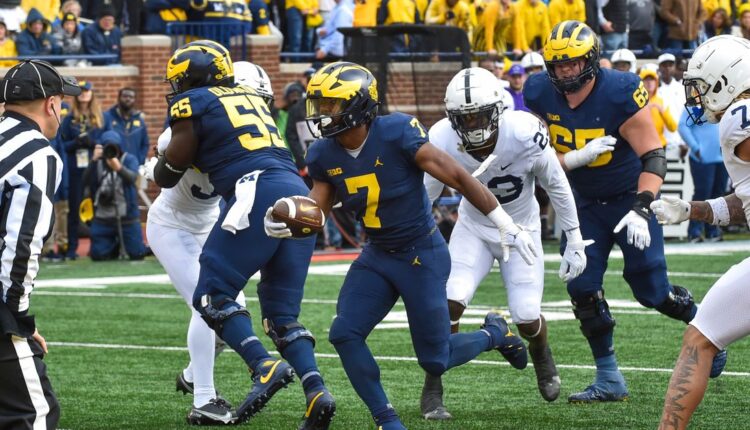 Maryland football hit the road for a Saturday afternoon Big Ten tilt with the Indiana Hoosiers.

With less than five minutes remaining in the final quarter, the Terps had a 31-27 lead as their defense trotted onto Memorial Stadium in Bloomington, Indiana. Maryland forced a fumble, which it recovered in great field position.

Edwards Jr. and the Terps’ rushing attack put the game on ice with a run-focused seven-play, 62-yard drive, with redshirt freshman running back Roman Hemby gashing Indiana’s defense for a 46-yard gain. The drive concluded with Edwards Jr. using his legs to charge in for a three-yard touchdown.

Maryland’s touchdown was enough for a 38-33 victory over Indiana. The Terps moved to 5-2 on the season for the first time since 2016. Next, Maryland will return to College Park next Saturday for its heir homecoming clash with Northwestern at 3:30 pm

10 Big Ten teams were in action this week, highlighted by statement victories and a few deflating losses. Here’s what stood out from this weekend.

Biggest surprise: Minnesota vs. No. 24 Illinois

the no 24 Illinois Fighting Illini welcomed the Minnesota Golden Gophers to a raucous Memorial Stadium in Champaign, Illinois.

Many were unsure if Illinois hath what it takes a true contender in the Big Ten, but a victory over Minnesota changed people’s opinions.

Illinois received the opening kickoff and proceeded to use a nine-play, 75-yard drive to drive down the field. Illinois senior quarterback Tommy DeVito found junior running back Chase Brown for a 40-yard touchdown. The pair’s connection gave Illinois a 7-0 lead.

In the second quarter, Minnesota responded with a touchdown drive of its own. Senior quarterback Tanner Morgan ran in a nine-yard touchdown to cut Illinois’ lead to 10-7.

Illinois took a 13-7 lead into halftime after kicker Fabrizio Pinton sent a 23-yard field goal through the uprights.

Minnesota took a 14-13 lead coming out of halftime, after senior running back Mohamed Ibrahim charged in for a four-yard touchdown.

DeVito culminated the drive with a five-yard rushing touchdown to reclaim a 20-14 lead.

Illinois used strong defense and timely field goals to pull away for the 26-14 victory.

Illinois will have a bye next week before traveling for a road clash with Nebraska on Oct. 29. Minnesota will be on the road next Saturday, as a Saturday night showdown with Penn State awaits.

Statement game: No. 10 Penn State vs. No. 5Michigan

Michigan head coach Jim Harbaugh and the No. 5 Michigan Wolverines hosted James Franklin’s No. 10 Penn State for a highly anticipated game in mid-October.

The Wolverines jumped out to a 13-0 lead, highlighted by a 13-play, 70-yard drive that ended with junior running back Blake Corum charging in for a one-yard touchdown.

With fewer than six minutes remaining in regulation, Edwards exploited Penn State’s defense with quick bursts to get to the second level. Edwards capped off the drive with his second touchdown of the day to give Michigan a 41-17 victory over Penn State.

Corum and Edwards contributed 339 of Michigan’s 418 yards on the ground against the No. 5 ranked defense in the country. Harbaugh’s zone blocking system carved massive holes the entire afternoon, earning an impressive 7.6 yards per carry.

Both teams have a bye next week before home matchups on the last Saturday in October.

Penn State will welcome Minnesota to Beaver Stadium on Oct. 29, while Michigan will have a home date with in-state rival Michigan State that day.

Michigan State entered its Saturday afternoon contest with Wisconsin on a four-game losing streak, and DraftKings Sportsbook had the Spartans as 7.5-point underdogs at their home stadium.

The Wisconsin Badgers wasted no time, as they marched down the field on their first possession. They completed an 11-play, 63-yard drive with sophomore running back Braelon Allen charging in for a one-yard touchdown. Allen’s touchdown gave Wisconsin an early 7-0 lead.

Allen made his presence felt the entire afternoon, especially on the first drive of the second quarter. He ran in his second one-yard touchdown of the day to give Wisconsin a 14-7 lead heading into halftime.

Coming out of the locker room, Michigan State seemed determined to find the game-tying touchdown and it would do just that.

With less than five minutes left in the third quarter, Michigan State stormed down the field with junior quarterback Payton Thorne delivering a 72-yard strike to redshirt tight end Maliq Carr. The Spartans capped the drive off with redshirt senior running back Elijah Collins scampering into the end zone to even the game at 14.

The game went into overtime with both teams tied at 21.

After trading touchdowns in the opening possessions of the extra period, Wisconsin received the ball with a chance to take the lead.

Allen fumbled the ball trying to get back to the line of scrimmage, and Michigan State recovered with a chance of winning the game.

Michigan State secured a 34-28 victory to pull off the upset at Spartan Stadium.

Curderburger returns to Culver’s for a short time