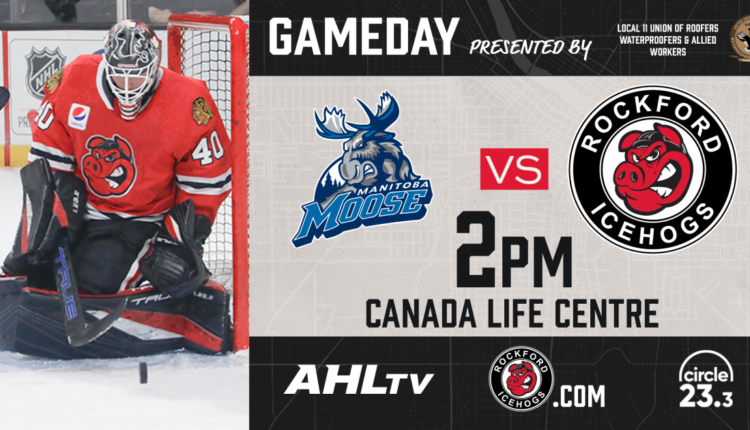 The Rockford IceHogs wrap up their second game of the 2022-23 opening weekend against the Manitoba Moose today at 2:00 pm CT at the Canada Life Center in Winnipeg, Manitoba, Canada.

IceHog’s Open Season with OT Thriller
In an explosive overtime comeback 5-4 overtime win last night, the IceHogs secured the victory after falling 0-3 through two periods. The third stanza marked the beginning of the comeback where forwards Luke Philp (2G, 1A), Luke Reichel (1G, 2A), and David Gust (1G, 2A) tallied three points each. After two saves by goalie Arvid Soderblom, forward Brett Seney was the hero in overtime when he scored his first IceHogs goal. Soderblom earned the victory in the IceHogs goal with 38 saves. Recap & Highlights

Players to Watch
Forward Luke Reichel led the Hogs as a 19-year old rookie in scoring and set the record for the most points in a single season by a rookie in the 2021-22 campaign. As a first-round draft pick in 2020, Reichel is expected to be called up to the Blackhawks in the near future. goaltender Arvid Soderblom returns for his second season with the IceHogs where he was ranked 11th in the AHL preseason among goalies (60+minutes) with a 1.99 goals-against average.

Almost Home
The IceHogs begin the year for the seventh time in the last eight seasons with a road matchup. After the opening weekend wraps up in Manitoba on Sunday, October 16, the Hogs make the drive back home for a seven-game home stretch.

Back at it again
The IceHogs and the Moose clash again after eight bouts last season where the Hogs split the head-to-head battles 5-3-0-0 with the Moose. The majority of Rockford’s wins came at home with only one victory at the Canada Life Center in Winnipeg, Manitoba, Canada where Goalie Arvid Soderblom racked up 26 saves. All time, the IceHogs are 24-23-3-3 against the Moose.

Join the IceHogs’ Opening Act with Hard Rock Casino-Rockford on Oct. 22!
The IceHogs celebrate opening night at the BMO on Saturday, Oct. 22 vs. Chicago Wolves at 7 pm Start the celebration with the IceHogs and the Hard Rock Casino – Rockford for The IceHogs opening act with a block party from 4:30-6:30 pm outside the BMO featuring Rockford band, Miles Nielsen and the Rusted Hearts.

The IceHogs and Hard Rock Casino – Rockford are also teaming up on an exclusive Hard Rock Hammy t-shirt giveaway. Fans attending the block party will have the first chance to get a shirt with the remaining shirts available to fans upon entry to the BMO Harris Bank Center.

Food trucks from Olivo Tacos, 15th and Chris, TNT Funnel Cakes, Inzombia coffee and more will fuel fans for the Opening Act and fans can participate in exciting pregame events like ax throwing, street hockey provided by the Chicago Blackhawks, giant Jenga, giant Connect Four, bags/cornhole and more! The block party will take place at the intersection of Elm and Main St., outside of the BMO Harris Bank Center Box Office.

The Rockford IceHogs celebrate its home opener on Saturday, Oct. 22 at 7 pm at BMO Harris Bank Center against the Chicago Wolves in Rockford. Listen and watch every game this season on the IceHogs Broadcast Network presented by BMO Harris Bank! Listen and watch every game from your favorite device on AHLTV, at home, or on the road at IceHogs.com and on the IceHogs app!

Be Close to the FUN with an IceHogs Group Ticket Package!
Group ticket packages are on sale now! Experience the excitement of IceHogs hockey with a group of 10 or more family and friends! From skating on the ice before the game, watching pregame warmups from the bench, performing during the game or high-fiving the IceHogs as they take the ice, an IceHogs Group Ticket Package brings you closer to the FUN! Reserve your group experience all season at IceHogs.com!

Season Ticket Memberships for 2022-23 are on Sale Now!
Don’t miss a moment of the action next season! Reserve your seats for the IceHogs’ 16th season as the top AHL affiliate of the Chicago Blackhawks. Celebrate Opening Night on Saturday, Oct. 22 at 7 pm at BMO Harris Bank Center against the Chicago Wolves! Contact us at (815) 847-6399, at [email protected]or visit IceHogs.com to claim your seats for this upcoming season.