Curderburger returns to Culver’s for a short time 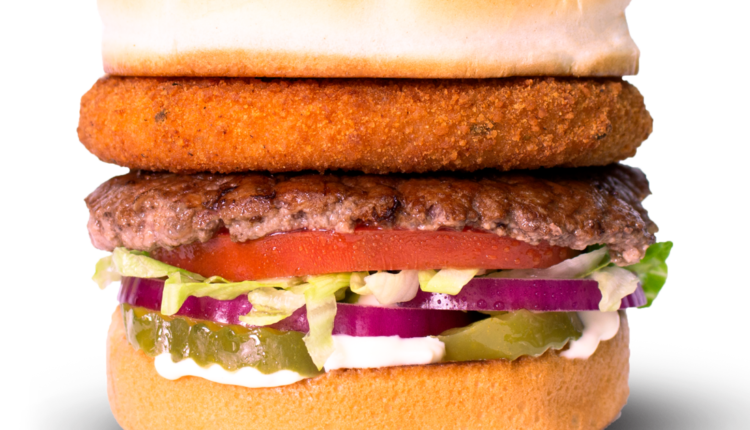 Take a look at the apple pie from Omaha baker Brittany Gubbels.

If you missed the Curderburger last year, you have another chance to harden your arteries this month.

The burger is on the menu at area Culver’s restaurants until Oct. 31, or until supplies last. The fast-food chain says “it’s as Wisconsin as it gets,” with a deluxe butterburger with lettuce, tomatoes, pickles, onion and condiments topped with a breaded and deep-fried crown of cheese.

The Culver’s website says it has a surprisingly low 790 calories, although it also has 42 grams of fat and 67 grams of carbs.

The Curderburger was first presented as a joke, but became a thing after Culver’s was deluged with requests. It appears to be popular this time around as well — long lines are reported at area drive-thrus.

There are two Culver’s locations in Omaha, and one each in La Vista, Bellevue and Council Bluffs. For directions, visit culvers.com.

A new Mexican restaurant that’s based in Bloomington, Illinois, is coming to Village Pointe in Omaha.

Ancho and Agave will open in the former Pier 1 Imports location at the shopping center near 168th Street and West Dodge Road. A sign in the window at the space says “Coming Soon.”

The Omaha restaurant will be the third Ancho and Agave, which was founded in 2019 in Bloomington, where one of its other outlets is located. Another is in Middleton, Wisconsin, a suburb of Madison.

Operators say the restaurant offers traditional cuisine with a modern approach. The menu features a number of appetizers, including hickory bacon & goat cheese guacamole and jalapeno and bacon poppers; tacos in unusual varieties such as cauliflower and kung pao chicken; enchiladas with various proteins, including mesquite-smoked chicken and shrimp & crab; and several other Mexican favourites.

Go to anchoandagave.com for more information.

A beef and cheese roll from Piroshky Piroshky.


The pies, called piroshkies, originated in Eastern Europe. They’re available in both savory and sweet flavors. They have been a hit at the bakery, in Seattle’s Pike Place Market, for 30 years.

Buyers must order at least $50 worth of goods.

Several varieties of sausage will be showcased at Sausagefest, which celebrates the 15th anniversary of Bailey’s Restaurant near 120th and Pacific Streets.

Specials such as chicken chorizo ​​hash, a smoked Italian sausage hoagie and an andouille scramble will be served all week.

Patrons can play Pass the Pig for T-shirts, gift cards, piggy banks and other prizes.

And on Oct. 22 and 23, accordion player Barry Boyce will perform for diners from 9 am to noon.

Orders can be called in to 402-598-4855 or placed in person at the restaurant, 13508 Discovery Drive, during normal business hours. Orders placed by email or messaging will be discarded.

A four pound breast averages about $60. Every order is cash only.

The last day to order is Nov. 17. Pickup is between 11 am and noon on Thanksgiving day.

No matter what time it is, restaurants across the Omaha metro area stand ready to serve.

Frustrated with the costs of partnering with nationwide food delivery companies in a time when deliveries were a lifeline for many, local rest…

When beloved Omaha eatery Gerda’s Restaurant and Bakery closed in 2019, it left a hole in Omaha’s dining community. So when it was announced t…

During the COVID pandemic, food takeout and delivery options increased throughout the Omaha area. This story focused on those options for late…

Chippy’s brought a taste of the UK to Omaha. Before the store and eatery opened its doors in the spring, it was hard to find food and other pr…

Stay up to date on what’s happening

Receive the latest in local entertainment news in your inbox weekly!