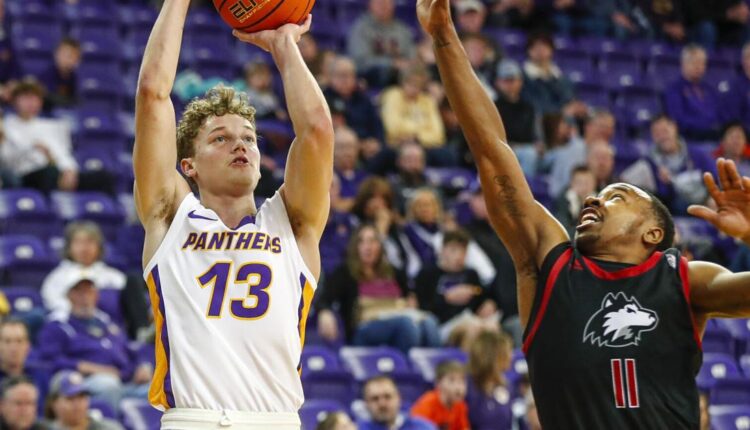 PEORIA, Illinois — Northern Iowa rang in the New Year by getting back in the win column with a 66-60 win over Illinois State thanks in large part to a 25-point outing from guard Bowen Born.

While Born provided the necessary scoring punch, UNI head coach Ben Jacobson gave credit to his young squad for making the plays they need to at the end of the game. Jacobson added he was proud of the way his team grinded out the win.

“They made some important plays,” Jacobson said. “They made—as we all term them—winning plays.”

Coming off a 12-point loss to Missouri State, Jacobson said the early determination and energy brought by the Panthers—especially on the defensive end—played a large part in the ultimate outcome of Friday’s contest.

“That to me was the real key,” Jacobson said. “They had a couple days to sit that deal from Wednesday…The guys wanted to make sure we came out early and set the tone with our defense.”

Outside of an 11-point outburst from forward Liam McChesney in the first four minutes of the game, the Panthers gave the Redbirds little room to breathe on offense, holding their opponent to just 25 points and 32% from the field in the first twenty minutes of action.

In spite of their suffocating defensive effort, UNI did not manage to gain a lead until a Tytan Anderson layup gave the Panthers a 20-18 advantage with 7:41 remaining in the first half.

Born, who managed just three points through the first 10 minutes of the half, erupted for 11 points to close out the half and give UNI a 31-25 edge at halftime.

The Missouri Valley Conference leading scorer picked up right where he left off with five points in the first four minutes of the second half to help UNI build a 39-30 lead by the first media timeout of the second.

The Panthers’ lead swelled to 12 points with an emphatic dunk from forward Cole Henry with 13:56 remaining in the half, but the Redbirds refused to go quietly.

Illinois State trailed by just three points twice over the final eight minutes of action, but UNI held on and outscored the Redbirds 14-12 in that span to get their second conference win of the season.

Following the win, Henry touched on how the Panthers managed to rebound following their tough loss on Wednesday.

“In practice, we worked on our toughness,” Henry said. “After last game, we had to be tougher. Coach really made sure this game we were prepared to be tough…We were attacking the basket and getting fouled and getting to the free throw line tonight.”

As Henry pointed out, getting to the charity stripe paid major dividends for UNI as the Panthers got 27 free throws, making 17, after getting to the line just 14 times against Missouri State.

The win also served to provide the youthful Panthers with a dose of confidence as they get back into conference play for the remainder of the season.

“We are very satisfied with that win tonight,” Henry said. “Anytime you get some roadkill in conference play, it is a great feeling. This conference is so challenging no matter who you play…When you come into somebody else’s house and get a good win like this, it feels great—really, really great.”

Born closed out his night with 25 points on 7-of-13 shooting and a career high five three-pointers. Henry, on an Oskaloosa product, joked it was nice to be on the former Norwalk Warrior’s side after four years of going head to head in the Little Hawkeye Conference.

“It’s incredible,” Henry said. “It is incredible being on the teammate side of that because in high school I played four years against him. Being on the other side does not feel very good when he makes 2, 3, 4 threes in a row…and all the momentum swings. He has the ability to do that every night.”

Tytan Anderson also drew praise from Henry following a 16-point, 9-rebound performance. However, it was not the forward’s on-court production which Henry highlighted.

“He’s so much better than he was last year,” Henry said. “Mainly in that leadership role. He did not have a leadership role last year. Now, he is a captain. He is really leading us…He is a great teammate, a great guy off the court and he is a dude you root for.”

Up next, UNI heads even further east to take on Valparaiso on Wednesday at 6 pm The contest will be available on ESPN+ with a subscription.