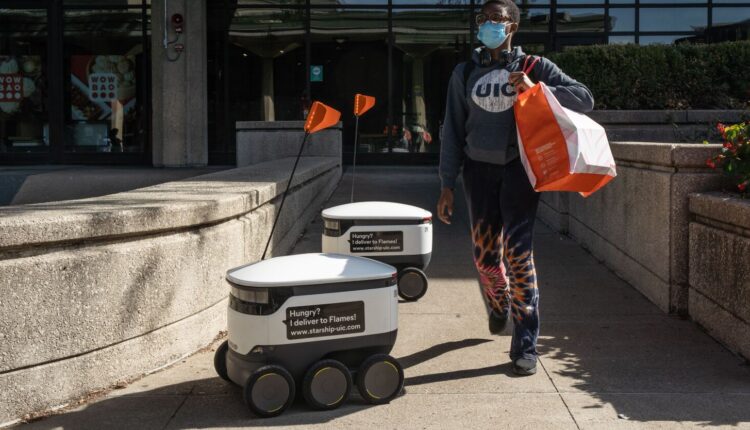 The Starship delivery robots currently traversing the University of Illinois Chicago campus are made by an Estonia-based company and are currently operating in six countries and, in the United States, on 25 college campuses, according to the company.

They have an unlimited geographical range, but deliveries are typically made in a 2-to-3-mile radius.

They have a range of security measures, including built-in cameras and sirens. They are charged overnight at on-campus hubs and are then released to “roam” during the day. They can operate for nearly a full day on a single charge, according to the company.

But can they operate in Chicago in the winter?

“Absolutely!” Annie Handrick, a company spokeswoman, said in an emailed statement. “They were created in the tiny Baltic country of Estonia where the winters are similar to Chicago and have also been operating for several years in other Midwest campuses including the University of Wisconsin, Purdue University and Bowling Green State University.”

The robots don’t enter buildings at UIC.So customers must meet them outside.

No. 23 Illinois will rely on new names to help stay atop the Big Ten