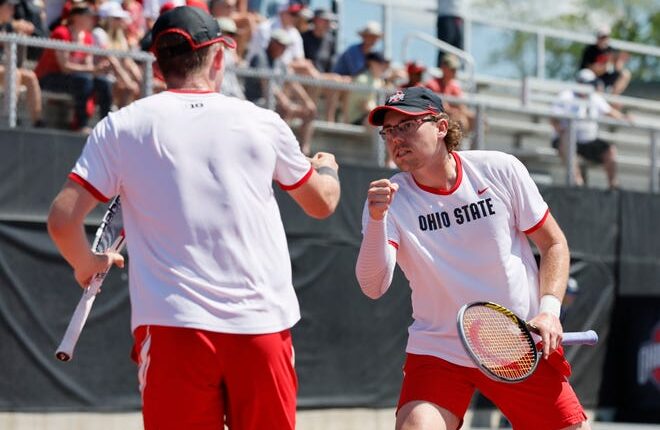 Cash, a New Albany native, and Vocel, a graduate transfer from Oklahoma State originally from the Czech Republic, were trying to become the second OSU doubles team to win an NCAA title. The Buckeyes’ only NCAA doubles title came in 2012 when Chase Buchanan and Blaz Rola won it.

Cash and Vocel were the No. 2 seed and had to rally to win their semifinal match on Friday to reach the championship match. Harper and Ciamarra were seeded fourth.

The match was decided in a super tiebreaker after Texas broke Vocel’s serve at 5-4 to win the second set.

In the super tiebreaker, the first team to reach 10 points ahead by two wins. Ohio State won the first three points, but Texas won six of the next seven. The Buckeyes knotted it at 7, but the Longhorns won the next three points to win the title. Match point was decided on a Texas winner hit between Vocel and Cash after a long rally.

The match started with a pair of service breaks before the teams held serve until OSU broke serve for a 6-5 lead. Cash then held serve to give the Buckeyes the first set.

Each team lost its first service game of the second set on double faults. Texas broke Cash’s serve to lead 3-1 before OSU got the break back on a lob on deuce point that Texas protested was long.

The teams then held serve until Texas broke Vocel to force the super tiebreaker.

Bill Rabinowitz covers Ohio State football for The Columbus Dispatch. Contact him at [email protected] or on Twitter @brdispatch.