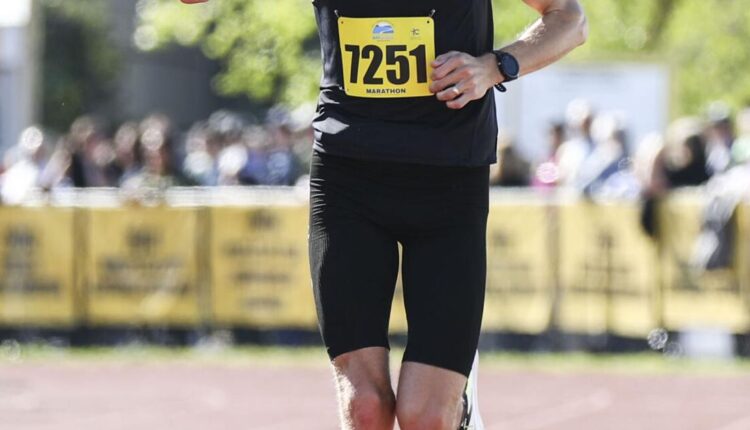 TRAVERSE CITY — Having a nice sit-down with some Moomer’s ice cream is plenty of people’s idea of ​​bliss.

Zach Ripley got that Saturday morning, but he had to run 26.2 miles first.

The 33-year-old Rockford resident also experienced the bliss of finishing first in the Bayshore Marathon, completing the course up and down Old Mission Peninsula in 2:20:06. After the race, the accomplished distance runner described the experience as “painful” and “awful.”

“That one felt really bad, and I blame it all on the other guy,” Ripley said in jest.

The “other guy” is Will Cadwell, the runner-up finisher in the marathon. Cadwell, who lives in South Haven, pushed hard out of the gates and finished in 2:21:23.

“I’m still in shock,” the 24-year-old Cadwell said. “Not my body or physically, but mentally and emotionally. I wasn’t expecting to run anywhere near that fast, today.”

“That’s the fastest I’ve ever gone out in a marathon,” he said. “My goal today was only to race it. Whoever’s going to run the race, just stick with them. I just didn’t expect it to be that fast.”

His competitive nature got the best of him and pushed him past a pace he is comfortable with, although Ripley didn’t realize that until the halfway mark.

“Either I choose to slow down then or I know I’m going to die at some point before the finish,” he said. “I had to gamble that I would stay longer than the other guy.”

Ripley said seeing the halfway clock Saturday was “an unpleasant moment” because he believed he’d shot himself in the proverbial foot. But the gamble paid off big time, and Ripley came out victorious.

“When you run a race like that, you know those last four or five miles are going to be misery — and they were. So you have to look for something to sweeten the bitterness,” Ripley said. “That moment when I crossed the finish line was just bliss. I could just stop and walk.”

Ripley has run five full marathons, including the Chicago Marathon twice where he set his marathon personal best in 2015 with a 2:18:26. Saturday was his second win. He’s not yet sure what his next event will be, but he’s expecting to run again in a few months.

“I’ll run another (marathon) in the fall, I think. Something that’s probably a little more competitive and faster,” he said.

Cadwell just missed making it back-to-back marathon victories. He won the Nashville Rock ‘n’ Roll Marathon in November 2021 with a time of 2:26:34. He finished more than five minutes faster Saturday, but Cadwell had to settle for his third marathon runner-up finish out of six races.

“I thought the podium was a longshot just because of the competitive nature of this race,” Cadwell said. “But I’m stoked with second.”

Cadwell said he had no idea how he ran so fast and how he exceeded even his own expectations.

“It was a beautiful day. The course is amazing. The energy of the race is phenomenal,” Cadwell said. “I just went with the vibe.”

“You can’t get a more perfect day than this,” Cadwell said. “Every time I started to hurt, I’d just look out at the bay and see it so calm and peaceful. That helped me process the pain a little easier.”

His trademark white pearl earrings that sparkled in the sunlight probably helped a little bit, too.

“I had such a good time that I had to come back and try to do a little bit better,” Cadwell said.