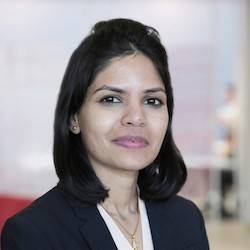 A team led by Greeshma Gadikota from the College of Engineering has been named one of five finalists for a national prize for its environmentally friendly method of extracting lithium, an increasingly essential ingredient for electric vehicle batteries, energy storage, smartphones and laptops.

The US Department of Energy’s American-Made Geothermal Lithium Extraction Prize finalists, narrowed down from 238 groups, are finding the best, most efficient ways to domestically mine lithium. While the contest is academic, inventive and scholarly, successful domestic lithium extraction methods could lead to an economic boom and help attain a green future for the US

Contest results will be announced in fall 2023.

“Lithium is the new gold,” said Gadikota, assistant professor and Croll Sesquicentennial Fellow in Civil and Environmental Engineering. She is also a faculty fellow at the Cornell Atkinson Center for Sustainability. “Lithium’s value has surged in the past year. We cannot really talk about having a meaningful, clean energy transition without talking about critical metals – and lithium figures at the top of that list.”

Currently, the US imports nearly all of its lithium supply, according to the US Geological Survey (USGS). Mining operations in Argentina, Chile, China and Australia supply the bulk of the world’s lithium.

For the US, domestically extracting lithium from brines from the subsurface – left over from geothermal energy production – can be an environmentally friendly process that yields ample lithium. Efficiently extracting it is the key.

Gadikota’s group is pioneering “Engineered Lithium Ion-Sieve Technology,” which involves binding lithium to an ion sieve, stripping it from the cell using recycled acidic solutions, then applying electrochemistry to that lithium concentrate to produce lithium hydroxide.

During that final step, hydrogen and acids become the byproducts. The hydrogen can be used for energy, while the acids can be looped back into the process for lithium stripping. The extracted lithium is then used for energy storage.

Critical minerals, such as lithium, are an important component of the new Inflation Reduction Act of 2022, which the US Senate passed on Aug. 7. The bill – which features green energy provisions – increases American energy security, all while decarbonizing the economy. The bill provides for improving batteries and minerals processing, which will require lithium. The US House of Representatives is expected to vote on the measure Aug. 12.

Developing green energy is mineral intensive, which means that lithium supply security is a top domestic priority. “This contest opens up new possibilities for using regenerable materials and renewable electricity, and lithium recovery from geothermal sources,” Gadikota said. “Cornell has a long history of this kind of innovation, so our team is iterating on that tradition to address societal challenges. We want to tackle lithium recovery in an environmentally benign manner, while being cost competitive.”