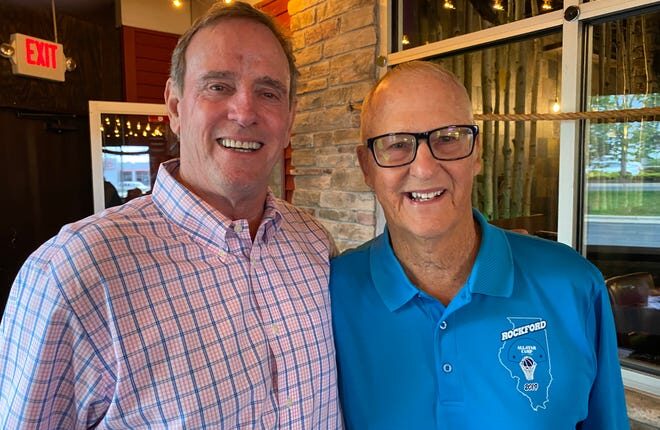 ROCKFORD — For 38 years, the Rockford All-Star Basketball Camp would pack an area gym.

On Sunday, the camp packed Greenfire restaurant in northeast Rockford.

Former Guilford star Dale Greenlee, who started on the Kansas Final Four team in 1974 and was the Jayhawks team captain as a senior in 1975, began the camp in 1982 with Bill Willoughby. It quickly became a premier basketball camp in the area, drawing as many as 250 kids for its yearly 8 am to 3:30 pm 10-day run.

Greenlee wanted to get to 40 years — he wore No. 40 at Kansas — but the camp disappeared with a whisper due to COVID reasons three years ago.

That’s not how they wanted to go out, so the camp coaches held a reunion Sunday.

“We’re such great friends,” Greenlee said. “The camp coaches have become our family. We wanted to get as many as we can back together and have a reunion.”

Armato missed only the first year. In 1983, Willoughby drove down to Northern Illinois University to recruit Armato, who was the Huskies’ junior point guard.

“The camp was diverse and inclusive,” said Armato, who later coached Rock Valley College and Guilford High School and was also had a stint as an assistant at NIU. “It didn’t matter if parents had a lot of money or if they didn’t have enough money: We got kids there and coached them. We had kids of different levels of ability. We had some who were really skilled and some who had never picked up a basketball in their life. And almost all of them enjoyed it.”

Over 10,000 kids attended the camp over the years.

“Everyone needs drills. I don’t care if you are a grade school, high school, college or pro player, you need to work on drills and fundamentals. AAU, they travel and play lots of games. Your stronger players are going to get better playing good competition, but the weaker players don’t get as many touches. So what we did in our camp is every player got the same amount of touches in all our drills. That was being a little lost in basketball.”

The All-Star camp took kids age 5 through high school for the first few decades. It then focused more on the younger kids after running into competition from travel teams.

“Club basketball did hurt us when it really took off the last 10 years of camp,” Willoughby said, “but what we did is we kept a lower floor. We went from 5 years old to 14. We lost the 15-17-year-olds. They went to the club or played with their high school team in the summer.

“We also went after the girls 20 years ago. Girls want to learn, too. And our camp exploded. The girls are very caring about learning. They really made our camp go.”

Jack McCarthy, Illinois Basketball Coaches Association Hall of Famer who coached at Belvidere and Beloit Memorial, taught at the camp for 27 years. One year, he left an Iona University reunion early to return from upstate New York to Rockford so he wouldn’t miss the camp.

“All the coaches became friends,” McCarthy said. “And we all knew what station we were on. I taught the history of basketball on Monday, Tuesday I ran the George Mikan drill, Wednesday it was free throws, Thursday half-court hot shot and Friday 3-on-3 with Dan Green. I still remember that to this day. I did it every year.

For half-court hot shot, kids got two chances. If they made one, McCarthy would buy them a Coke. That was one of several fun touches the camp was noted for, including showing the kids film of 1980s NBA All-Star dunk contests and old footage of Larry Bird, Magic Johnson, Dr. J. and Michael Jordan. Also they would take Popsicle breaks.

“Every kid loves popsicles,” Armato said. “We would work the kids hard, then Dale would have a Popsicle break.”

“The camp,” McCarthy added, “was great for the children from Rockford, Loves Park, South Beloit, Byron. People came from all around to come to that camp.”

Sunday, they came from all over one last time to say a final goodbye to the Rockford All-Star Basketball Camp.

With the stroke of a brush | features