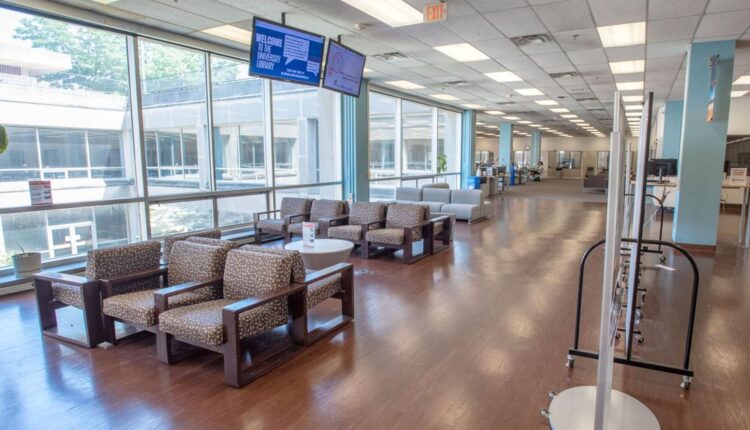 CHAMPAIGN — A day before her graduation, University of Illinois student Yi Yuan made sure to stop at one of her favorite stomping grounds: the Undergraduate Library.

It wasn’t hard for her to find a seat: By Friday, most finals were finished, thousands of students had already left campus. So she plopped down with her bubble tea and got to work.

“I’m just here to spend the last day at UGL,” she said. “It’s quite sad. We have a lot of memories attached to this library.”

After almost 53 years of existence, the quirky underground library, described as a “home away from home” for many of the UI’s diligent scholars, came to a quiet end.

In a normal year, they’d get up to 1 million visits, with 700 to 800 people an hour flowing in every afternoon of finals week.

“We were about half of that year,” Ward said. “It made the ending week feel a little differently than I would’ve expected.”

The staff hosted some fun and games on Reading Day last week, to celebrate the library’s history while students were still around. By popular demand, the library opened its doors one last time Saturday afternoon, where students, staff and alums could stop by for a tour from 1 to 4 pm

The Undergraduate Library’s next two years will be transformative, as the campus student study and service hub becomes the university’s new home for special collections, rare books and archives. The UI has secured $50 million for this first phase of change, with construction set to begin in January 2023.

Plenty of work lies ahead in the next couple semesters. Decommissioning the Undergrad Library means all its usual occupants, like Yuan, will need new homes.

Four-phase process For four years, the Undergraduate Library was the logical place for Yuan — now degreed in actuarial science and statistics — to study for exams. It was close, with lots of natural light streaming in, and the main floor was active enough to allow for discussion on group projects or fun, late-night study sessions with friends.

“The social nature of this space has been clear since the beginning,” Ward said. “This has always been a home for people and their friends and study groups, and we’re looking for ways to carry that over into other library spaces.”

To make up for the Undergrad Library’s heavy student inflow, library staff and administrators have been mapping out where all the services will be relocated next semester.

Many of the Undergraduate Library’s offerings, like The Writer’s Workshop and study spaces, will move to the first floor of the Main Library just above it. That library is purchasing sound-insulated rooms for students who want to attend Zoom classes.

The Media Commons studios, for student films and audio projects, will be split to the second and third floors of the Main Library and basement of the Grainger library.

And several other prominent campus libraries will try and pick up the study space slack. The ACES Funk Library and Music and Performing Arts Library each have six reserveable study rooms; the Grainger Engineering Library is extending its late-night hours.

The conversion of the Undergraduate Library is the first step in a four-phase process to completely revamp the Main Library over the next several years.

After the Undergraduate Library is turned into a special-collections facility (ETA: May 2024), five of the six main stacks in the Main Library will be demolished. A modern, five-story infill, featuring an “interdisciplinary hub” for faculty and students, will take their place.

The plans were made in light of the aging stacks, which are apparently hazardous to the collections they house. The evacuation of the Undergraduate Library was first announced in fall 2018, and the decision has not evaded controversy.

“It’s been a mixed response, we’ve seen a bit of everything,” Ward said. “I think the biggest takeaway from the mixed reaction we’ve seen is we have a big job in front of us in terms of communication, about where the home for undergrad students is across all the libraries on campus, and where to find the services they need.”

Professor Ralph Mathisen, director of undergraduate studies and chair of the University Senate’s Committee on the Library, will continue to help host once-a-semester “town halls” checking in with the library project.

He’s worried for some students who may be “slapped in the face” when they return to the Undergraduate Library’s closed doors next semester.

“Students really need to make their feelings known, make the library know what they’re happy and unhappy with, what they’d like to see and not like to see,” Mathisen said.

Undergraduate Library staff, like Ward, will find new homes across the campus collection of 20-plus libraries. As will the employees of the underground Espresso Royale, at the end of the tunnel connecting the Undergrad and Main libraries.

The honor of working one of the library’s last café shifts wasn’t lost on barista Isabel Lopez.

She’ll miss working the chill mornings at the underground coffee shop, where staff and studying students steadily pour in.

“I’ve had a really great time being a part of the UGL community here,” she said after her shift Friday. “It feels pretty sad today, saying bye to everyone for the last time.”

UI freshman Justin Pan is always “mind-blown” staring down into the open-air chasm in the center of the Undergraduate Library. Now he wishes he stopped by a few more times — Grainger tends to get more crowded, he said.

On Friday, he pumped out his last essay alongside freshman Anne Schmidt, while she studied for her last final, set for 7 that night. Now, they’re among the last students to ever use those tables for academic work.

“It’s kind of crazy,” Schmidt said, confronted with this fact. “I feel like everything, especially since COVID, is this big monumental thing, this new piece of history.”