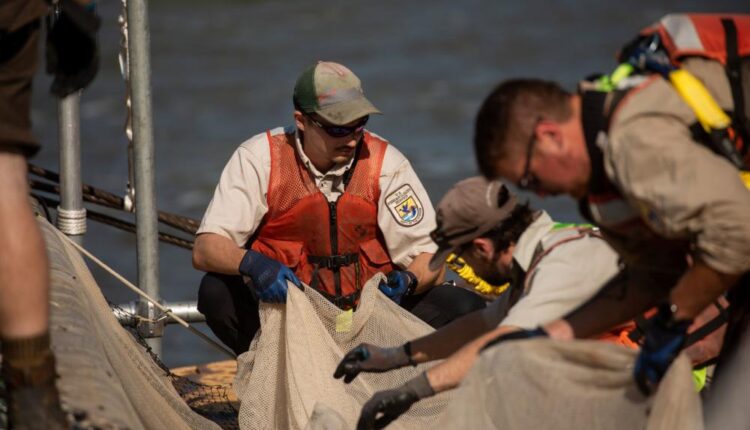 Invasive carp were introduced to the US to control algae in the 1970s but due to their greedy eating habits they have become a destructive species to many inland waterways which are instrumental in supporting the inland economic supply chain, navigation and recreational activities. To prevent the movement of these carp into the Great Lakes, the US Army Corps of Engineers, Rock Island District, is designing a complex ecosystem protection project at the Brandon Road Lock and Dam on the Illinois Waterway.

This project includes a layered system of structural and nonstructural measures including a flushing lock, engineered channel with electric barrier, underwater acoustic deterrents, an air bubble curtain, and an automated barge clearing (ABC) deterrent. Many of these features include new technologies that require extensive testing to determine effective design and placement within the project site.

An interagency group of specialists from USACE, US Geological Survey, and US Fish and Wildlife Service, were recently successful in designing, constructing and testing a full-sized prototype of the deterrent at Peoria Lock and Dam in Peoria, Illinois. The newly designed prototype is a set of tanks installed on the bottom of the river which blow pockets of air up through the water to clear fish from underneath barges as they pass through the locks.

“We are trying to protect the Great Lakes from harmful invasive species using this new experimental technology,” said Mark Cornish, biologist and Environmental Planning Section Chief for the Regional Planning and Environmental Division, North. “This testing is important because we plan to use the new technology as part of the Brandon Road Interbasin Project, and we need to ensure it is safe to use around commercial and recreational vessels and that it performs as expected in removing small fish from the near -hull areas of the barge.”

Colin Moratz, biologist, USACE Rock Island District added, “Previous studies have demonstrated that small fish could be entrained between barges in a tow when they were configured with a box to rake coupling and transported long distances, at least 12 miles. This deterrent technology could provide a means to reduce the threat of small invasive carp reaching the Great Lakes by breaking the currents that carry fish between barges and forcing the fish out of the protected junction.”

Cornish also noted that, “Technologies such as the ABC deterrent are necessary if we are going to protect the Great Lakes from aquatic invasive species while keeping our waterway open for low-cost transportation that helps protect the US,” economy adding “The ICRCC [Invasive Carp Regional Coordinating Committee] is leading the way through funding interagency projects like the ABC Deterrent project to develop the tools needed to protect our nation’s waters. Through research comes answers.”

Though the planning of this project has been years in the making and the implementation of the testing is only a couple of weeks in duration, the project has seen and overcome a few bumps in the road.

“Every field study has challenges but this one seems to have had more than its share. I can’t say enough good things about how the Illinois Waterway operations staff and USACE Rock Island District dive teams kept this project going forward. They fixed what was broken, provided advice on how to redesign the barrier so that it would stay in place, and worked with the navigation industry when navigation notice changes were needed. The study couldn’t have been done without them,” explained Cornish who went on to praise everyone working on the effort.

“I also give credit to the study team for keeping the faith when things went down. The study team from USGS, USFWS, and USACE maintained a common sense of purpose that united the team in a special way. Their innovation and ability to identify smart and creative solutions and to work together keeps the study moving forward.”

this work, New Deterrent Technology Tested at Peoria Lock and Damby Frances Candelariaidentified by DVIDSmust comply with the restrictions shown on https://www.dvidshub.net/about/copyright.

Rockford IceHogs | Know Before You Go