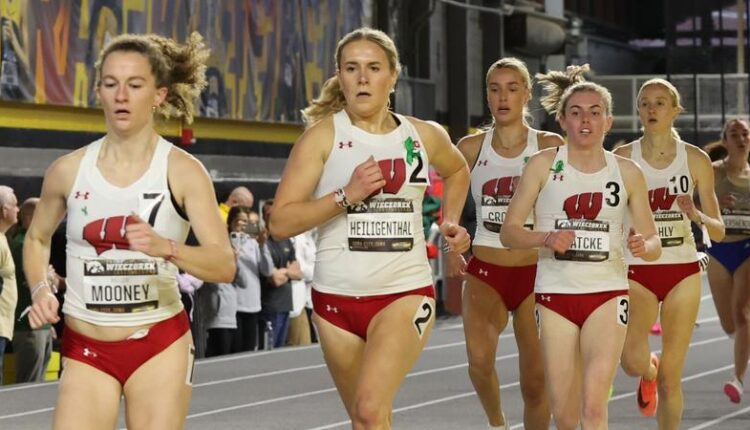 MADISON, Wis. – The 17th-ranked Wisconsin women’s track and field team continues its indoor season, competing at two different meets this weekend. All runners and throwers will be traveling to Bloomington, Indiana, to compete at the Indiana University Relays on Friday-Saturday. Events will start at 5 pm CT Friday and 10:15 am CT on Saturday. Athletes competing in pentathlon, long jump, triple jump and pole vault travel to Champaign, Illinois, for the Illini Challenge on Friday-Saturday. Events will begin at 11 am CT on Friday and 10:15 am CT on Saturday.

Here are five events to watch this weekend.

1. THROWING DOWN WITH THE BADGERS: The throwers will compete alongside runners in Indiana with redshirt junior Chloe Lindeman headlining the weight throw. Lindeman is coming off a school record in the event last weekend. She won the event with a throw of 74 feet, 7 inches, improving her previous best by more than two feet. She broke a four-year old UW record, besting the previous mark of 73-3 1/4 set by Banke Oginni in 2019. Her throw now leads the Big Ten and ranks her fourth nationally. She will be joined by fellow Badgers Olivia Roberts and Abby Peeler, who also earned spots on the podium this weekend. In the shot put, redshirt senior Josie Schaefer returns to action this week.

2. LAPS AND MORE LAPS: A strong field of distance runners will compete at Indiana this weekend. Senior Victoria Heiligenthal leads the Badgers in the mile after running 4 minutes, 48.39 seconds last weekend. Six other UW athletes placed in the top 10 last weekend, including graduate student Lucinda Crouch and redshirt junior Shea Ruhly placed in the top five for the team with times of 4:48.81 and 4:50.15, respectively. Junior Samantha Stieve leads the Badgers and ranks fifth in the 3,000 meters in 9:29.96.

3. SPEEDY BADGER: Sprint star Kiley Robbins leads the Badgers in the dashes. Robbins is coming off a second-place finish in the 60 meters at the Larry Wieczorek Invitational last weekend, running 7.45. Seniors Destiny Huven and Taylor Gilling have both run personal bests this season. Robbins also leads the team in the 200 meters, running 24.73 at the Wieczorek.

4. HURDLING HUVEN: Senior Destiny Huven continues to be a force to be reckoned with in the 60-meter hurdles. Huven finished fifth, breaking her own school record in the event, running 8.14 in the semifinals and final. Her time leads the Big Ten and ranks fifth nationally this season.

5. HOW HIGH CAN YOU GO: Sophomore Julia Moore led the Badger competitors in the pole vault in Iowa and will return this weekend along with other event athletes. Moore had the highest clearance last weekend of 12-9 ½ for a second-place finish, which ties her for 10th on the UW indoor performance list. Two other Badgers placed in the top five alongside her — Tia Dorshorst came in fourth after clearing 12-5 ½, and Lauren Bilau tied for fifth place with a clearance of 12-1 ½.