Gophers football vs. Illinois: Keys to game, how to watch and who has the edge – InForum 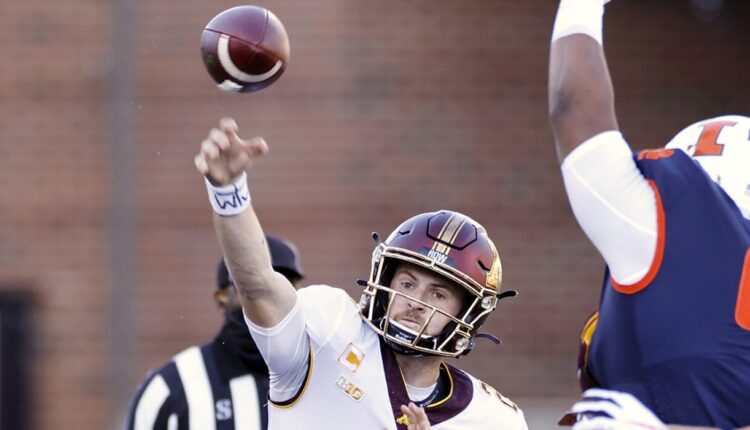 Key matchup: Illinois running back Chase Brown vs. Gophers rush defense. Brown leads the nation with 879 rushing yards this season (146 per game); Minnesota is sixth in the country against the run, allowing 81 yards per game. Brown has 516 yards after contact, while Minnesota’s missed tackles directly led to Purdue points two weeks ago.

Gophers offense vs. Illinois defense: Minnesota was held to its lowest rushing total since 2015 against the Boilermakers (47 yards), and Fleck said Illinois’ front is better than Purdue’s. After missing the Boilermakers game, RB Mo Ibrahim (ankle) is expected to return. That will be a massive boost for Minnesota. He has 567 rushing yards, including 388 after contact. Backups Trey Potts and Bryce Williams had trouble breaking tackles vs Purdue. … Illinois DC Ryan Walters is very aggressive, dialing up blitzes more than anyone else in the nation, per Pro Football Focus. DT Jer’Zhan Newton, a 6-foot-2, 295-pound force, leads the Illini in tackles (33), pressures (31) and sacks (three); Newton, DT Keith Randolph, DE Seth Coleman and Gabe Jacas have a combined 88 pressures. They will be a handful for C John Michael Schmitz and the rest of the Gophers line. … RT Quinn Carroll has the lowest pass-blocking grade (52.5) ​​among Minnesota starters but the second-highest run-blocking grade (83.9), per Pro Football Focus. … Outside of Chris Autman-Bell (knee), there are no other big, known injuries for the Gophers. Illinois expects to have LB Isaac Darkangelo and CB Tahveon Nicholson back after injuries in the Iowa game. … WR Daniel Jackson has been Minnesota’s No. 1 target in the two games without Autman Bell. He had his first career two-TD game at Michigan State and his first career 100-yard game vs. Purdue. … Illinois has not given up a touchdown at home this season. EDGE: Illinois

Gophers defense vs. Illinois offense: Minnesota’s total defense is No. 1 in the nation (222 yards per game), and while Illinois rushing offense is a big threat with Brown, the Illini could be even more one-dimensional Saturday. They are no. 30 in rushing yards but 101st in passing yards, and starting QB Tommy DeVito appears doubtful with an ankle injury aggravated in the Iowa game. Backup Artur Sitkowski completed 13 of 19 passes for 74 yards, no touchdowns and one interception. … Illini top receiver Isaiah Williams, who left the Iowa game with a concussion, is expected to return. Primarily out of the slot, he accounts for 29% of Illinois’ receptions this season. … If Illinois offensive tackle Alex Palczewski starts Saturday, it will be his 59th collegiate start and will break a tie for the Big Ten record with Minnesota alum Conner Olson (2017-21). … The Gophers have not given up more than 10 points in a quarter across its past 16 games. …S Tyler Nubin returns to his home state as Minnesota’s highest-graded defensive player (83.9), per PFF. Two fellow defensive backs — CB Terell Smith and S Jordan Howden — are second and third, respectively. This high level in the back end will allow defensive coordinator Joe Rossi to be more aggressive if he sees fit. EDGE: Gophers

Special teams: Gophers PR/KR Quentin Redding had a season-long 20-yard punt return vs. Purdue and a big kick return called back by a penalty. The first spark in the return game this season. K Matthew Trickett missed his first field goal of the season two weeks ago. … Illini K Caleb Griffin was hurt for the Iowa game, and backup Fabrizio Pinton went 3 for 3 with a long of 37 yards. EDGE: Illinois

Prediction: At No. 24, the Illini are ranked for the first time since 2011, ending the longest drought among Power Five programs. But they are nearly a touchdown underdog at home, in part because of injuries to key offensive players. That will make the difference. Gophers, 20-14

This story was written by one of our partner news agencies. Forum Communications Company uses content from agencies such as Reuters, Kaiser Health News, Tribune News Service and others to provide a wider range of news to our readers. Learn more about the news services FCC uses here.