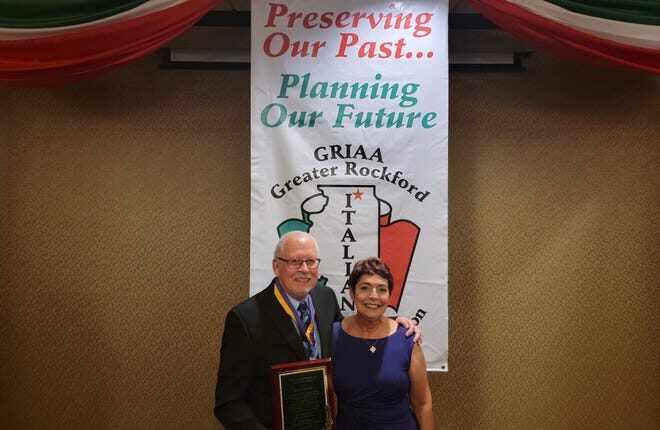 ROCKFORD – The Greater Rockford Italian American Association held their annual Hall of Fame Banquet at the Venetian Club on Saturday.

Rockford Italian Hall of Fame induction is community nominated and selected annually by the GRIAA’s Hall of Fame and Special Recognition Committee.

Mike Doyle was inducted into the Italian Hall of Fame in 2021. Mike has a long career as a writer, Rockford Register Star sports writer, and high school journalism teacher. He has written two books on the fatal Belvidere tornado in 1967 and edited and co-authored many books and publications. He is editor of the GRIAA publication Pappagallo and lead author of the season produced for Rockford’s Festa Italiana.

The Giamalva family, owners of the Palace Shoe Service in downtown Rockford since 1926, were also honored with a special recognition award. This long-standing and popular company has closed its doors in four generations of the family after 95 years of uninterrupted business.

Those honored were also honored on Sunday during the annual Columbus Day Mass in St. Anthony of Padua Parish in South Rockford.

Police: A shootout broke out in Champaign, injuring a child | Top Story

Watch now: Who will Mwilambwe appoint to fill the seat in Ward 6? | politics