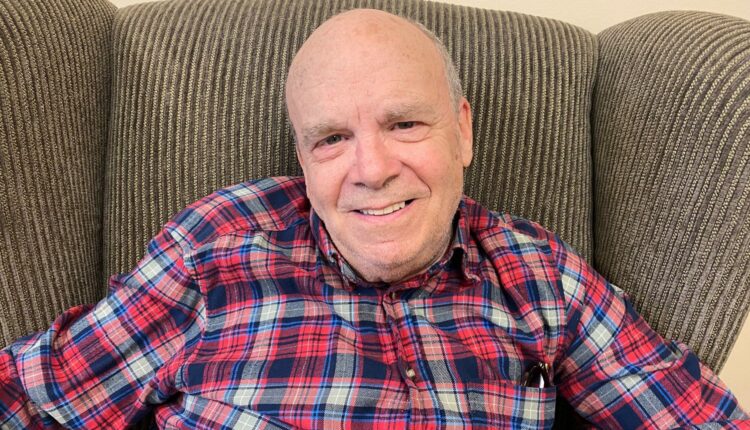 The Rev. Ron Garner is on a mission to end hunger and, at age 70, he has no plans to slow down.

Garner, the pastor of Wantagh Memorial Congregational Church for the past 13 years, continues to operate the Wantagh Giving Garden from his backyard, delivering fresh produce to food pantries. He also organizes weekly food drives for local pantries. In honor of his efforts, the Herald is proud to name Garner its 2022 Person of the Year.

He said he always wanted to use his position to do something special.

“I knew this would be my last pastor job, and now, at 70, I still feel that way,” Garner said. “But I don’t plan on retiring any time soon. There is still much I have to do.”

As he took on the issue of food insecurity, he developed a relationship with the Freeport Emergency Food Center — and noticed that there was a lack of fresh produce at the pantry. So he took a walking tour in 2011, starting in Montauk and ending in Wantagh, with a goal of collecting money and food donations for pantries along the way.

He created the Wantagh Giving Garden in 2012, and the 2022 season marked its 11th year of service. At first, he received help from his wife, Maureen, and stepdaughter, Jessica. But the garden soon became difficult for only three people to manage.

“Eventually, a congregant named Laurie Nunez took it over,” Garner said. “And recently we’ve gotten help from Kiwanis as well.”

Nunez, who lives in Bellmore, successfully applied techniques she learned on Google and YouTube to the garden, and it has produced cantaloupe, potatoes, tomatoes, kale, green beans, and more. They even tried corn a year.

“Ron is a very giving person, with a big heart,” Nunez said. “He looks at a person as a person — not by the color of their skin, sexual orientation, and so on. He loves his families — both personal and church. If I could describe him in one word: selfless.”

The garden operates from May to November, and this year was one of its most successful to date. Jim Silberger and Mark Engleman, of the Wantagh Kiwanis Club, tended the garden alongside Nunez.

“Ron is a very caring individual who really understands the need to help others,” Silberger told the Herald. “People who go to pantries typically take home canned goods and other non-perishables, so when you can get fresh produce, it’s really special, and it’s thanks to Ron that we’re able to do this.”

Silberger’s wife, Margaret, is involved with both Kiwanis and the church. “He’s never once wavered in his quest to feed the hungry,” she said of Garner. “The Giving Garden might not look very big, but it gives tons of produce.”

“We’d harvest on Sundays, but then we’d have work on Mondays,” Engleman added. “But Ron would always bring the fresh produce down to the pantries.”

Even those who don’t know him personally appreciate Garner’s efforts. “Fresh fruits and vegetables are critically important to a healthy lifestyle,” Christine Going, a member of the board of directors for Island Harvest Food Bank, said. “Food insecure families usually limit these foods due to cost and access. Their availability at local food pantries is an excellent way to meet this need.”

Garner comes from humble beginnings. He was born in the tiny town of Greensboro, Indiana, in 1952. “I spent my whole life there until I went to college,” Garner said. “My cousin Mark Williams and I were the first in the family to attend college.”

He went to Indiana Central, which is now known as the University of Indianapolis, and got a degree in elementary education in 1974. He taught in southern Indianapolis until 1977, and earned a master’s degree in education from Indiana University. He and his first wife, Sheri, had two children, Sarah and Abby.

In 1977, while riding his bicycle down the street, Garner stopped at an Army recruitment office and was offered the chance to enlist.

“I looked at the pay scale and said, ‘Oh man,'” he recalled with a laugh. “I told my wife at the time, and she wasn’t really keen on it, but understood the financial aspect.”

Garner served as a captain in the Army until 1988, but he eventually grew disillusioned, declared himself a noncombatant and withdrew. That was when he decided to attend the seminary.

“Declaring yourself a noncombatant was the kiss of death for an infantry officer,” Garner said. “But luckily, a very kind chief of chaplains told me that I’d make a great Army chaplain when he heard I was going to seminary. So I finished out my time in the Army as a chaplain.”

He was on a promotion list for the rank of major, and most likely would have finished his career as a lieutenant colonel. But life pulled him in a different direction. In 1989, he and his wife divorced, amicably.

Garner attended the United Theological Seminary in Minneapolis from 1989 to 1992. He met his second wife, Maureen O’Hagan, there, and they married in 1991. With Maureen, he has a stepdaughter, Jessica.

Garner’s pastoral skills were so sought after that he had two jobs in two Wisconsin churches while he was in seminary. He was a pastor at Parkview United Church of Christ in Peoria, Illinois, from 1992 to 1995, and then became senior pastor at a UCC congregation in Troy, Ohio, relocating with Maureen and Jessica.

“I didn’t really like being a senior pastor,” Garner said.

So he sent out resumes, got an offer from the United Reformed Church in England, and, starting in 1998, spent just over a decade overseas. Then, he said, “We started having grandchildren back in the states. So although we loved it (in England), we wanted to come back.”

In the first half of 2009, Garner split his time between preaching to congregations on Long Island and continuing his day job in England, before receiving an offer from Wantagh Memorial Congregational.

Even as a 70-year-old grandfather of five, Garner has no plans to end his good faith work anytime soon. He is driven, he said, by lessons he learned as a child.

“In my hometown of Greensboro, there was a huge amount of poverty,” he said. “And we were of course a farming region. So members of the church would bring food from their gardens to donate to those in need. The best part about it is that nobody was stigmatized or embarrassed, just people helping each other out. This is something I would like to see more of on Long Island. Neighbors helping neighbors.”