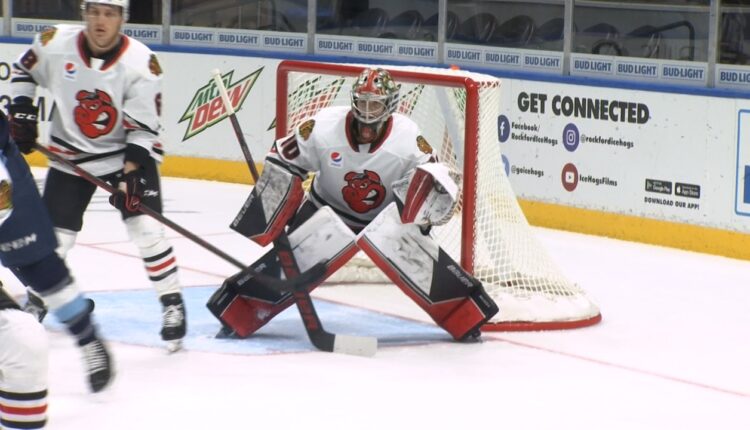 ROCKFORD, Ill. (WTVO/WQRF) – The IceHogs were red-hot last weekend, but they couldn’t carry that through Wednesday during an early-morning game against the Milwaukee Admirals. They lost 6-4.

The game started at 10:30 am at the BMO Center for a School Day game. Elementary school students from around the area were bused in for the game.

The IceHogs are short on goaltenders due to injuries and call-ups to the Blackhawks, so Mitchell Weeks, who was just called up from the ECHL’s Indy Fuel, made his first AHL start. He saw three pucks get by him in the first period as the Admirals took a 3-0 lead.

The IceHogs got goals from Buddy Robinson late in the first period and from Adam Clendening late in the second period. The Admirals scored in between, so heading into the third period the IceHogs trailed 4-2.

The Admirals bumped their lead to 5-2 early in the third period on a goal by Juuso Parssinen. But the IceHogs’ hottest player shot them back into the game. Forward David Gust scored back-to-back goals making it 5-4. Gust has scored nine points in his last three games.

But the Admirals ended the IceHogs’ comeback by depositing an empty-net goal with under two minutes remaining resulting in the final score of 6-4.

“They definitely beat us in the first,” said IceHogs’ defenseman Alex Vlasic. “I thought we had a good response in the second and the third, but it’s just too late against a good team like that.”

“We know this group can score goals, so we know we’re never out of it,” said Gust. “We’ve just got to tighten up the defensive side of it and lock down a little bit.”

The loss snapped the IceHogs’ two-game winning streak. Their next game will be this Saturday night at the BMO Center against the Grand Rapids Griffins. They’ll conclude their seven-game homestand Sunday at 4 pm when they host the Iowa Wild.

KCUR to host The Middle with Jeremy Hobson live from Kansas City on Nov. 2 | KCUR 89.3