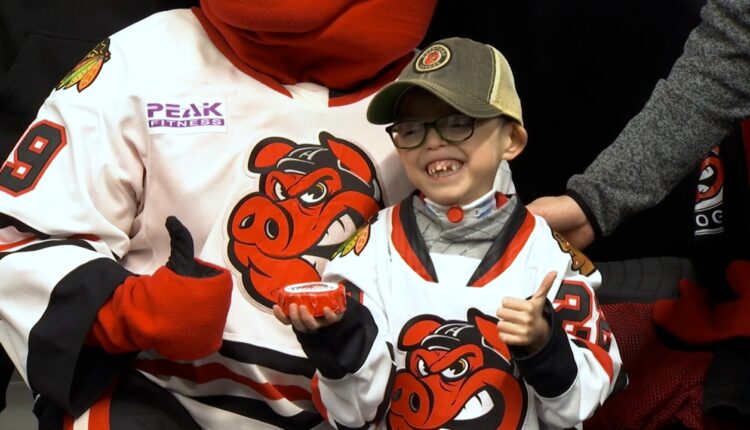 ROCKFORD, Ill. (WTVO/WQRF) – The ROCKFORD IceHogs have announced a major player signing. They have added a young man who has already made a big impression on the franchise.

His name is Samuel Escutia. He is six years old. He met his new teammates in the IceHogs’ locker room Friday morning.

Samuel’s has been tested by numerous medical challenges in his young life. He was born prematurely at 25 weeks weighing only one pound, five ounces. He has had open heart surgery, surgery on his skull, and surgery for a cancerous tumor in his liver. He has battled numerous viruses and illnesses.

Despite all of that, you will never meet a more positive, enthusiastic kid.

“The biggest thing for us is we look for in players for the Hogs in Rockford is guys with positivity,” said IceHogs head coach Anders Sorensen sitting next to Samuel in the IceHogs’ locker room. “Guys that are going to fight; resilient; be able to get through things in life. That’s what it’s all about being a hockey player. I think you’ve demonstrated that and beyond.”

So, the IceHogs signed Samuel to an honorary player contract.

Samuel was presented with his own IceHogs cap and jersey. He also got a helmet and a stick, and he received a puck autographed by Connor Murphy of the Blackhawks.

“I love all of you!!” That drew laughter from the players.

Since he was a player now, Samuel had to do what other IceHogs do, an interview. So I did the honors.

(SCOTT) How does it feel to be a Rockford IceHog?

(SCOTT) Are you ready to play?

(SCOTT) Can you skate?

(SCOTT) Then Samuel was off to the arena where he had a rinkside seat for the IceHogs’ morning skate.

The video board above welcomed him to the team. It was a day Samuel will never forget.”

“I’m going to tell all of my friends.”

Saturday afternoon before the IceHogs’ home game against the Chicago Wolves, Samuel will be dropping the ceremonial first puck.